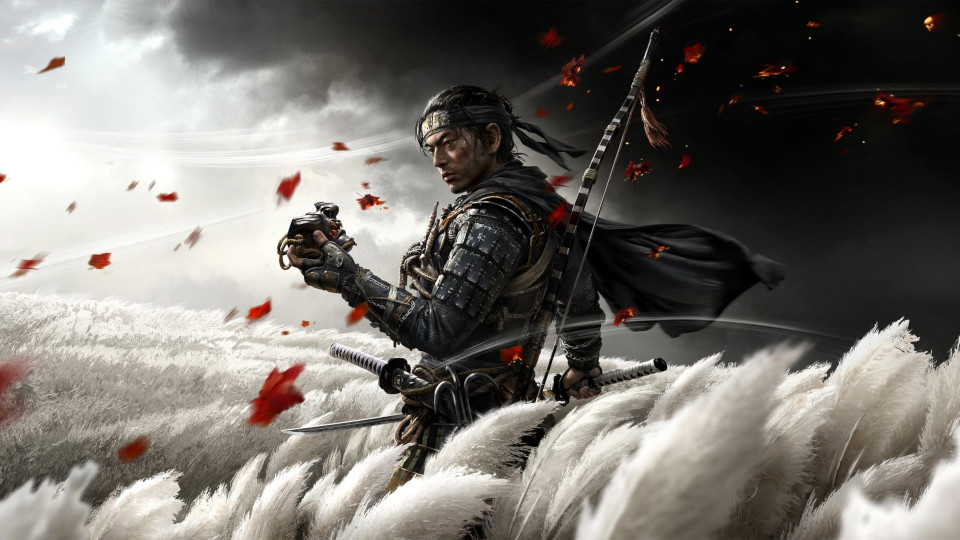 Ask any gamer what cool era they’d like to visit and you’ll hear Pirates, Ninjas and Samurai. Sucker Punch Productions, developers of the excellent inFAMOUs series, settled on the Samurai genre. This had piqued plenty of interest, so let’s see if they’ve made childhood dreams come true.

Ghost of Tsushima roots itself in the history of 13th century Japan but takes massive liberties. It revolves around the Mongol invasion of the Japanese mainland, with the island of Tsushima being a stopping point. Khotun Khan amasses a huge army and fights a battle against Lord Shimura and his samurai. The battle leaves the samurai forces decimated, Shimura’s nephew, Jin Sakai is one of the few survivors and in a last-ditch effort, tries to attack Khotun directly. His attack fails and he is rescued by a thief named Yuna. Jin vows to reunite the samurai and drive back the Mongol forces.

Watch the Ghost of Tsushima launch trailer below:

Ghost of Tsushima plays its card close to its chest and tells a simple and serious story. This works well for those used to samurai cinema, akin to Akira Kurosawa’s films or the Zatoichi saga. It’s done well, though some people may find its tone a bit flat. Needless to say, it’s paced well and the conclusion is satisfactory. Where the game shines, is in its side quests. There are standard single side stories and they are entertaining but the longer form side quests that take place across the entire story are fantastic and show more emotion and humour from Jin and his allies.

The gameplay breaks itself down into 2 paths, exploration and combat. Exploration is handled incredibly well. Sucker Punch has clearly looked at the slew of open-world games and decided to make a few changes. First up, no mini-map. For this open world, you have to actually find places. You can pull up the main map (complete with a fog of war) and select an icon to travel to but the crux of the game has you seeking locations by your own eye. You have the wind to help you and this is in line with Jin’s connection to nature as a noble samurai. With the swipe of the touchpad, you can call a gust of wind that goes toward your objective but never tells you exactly where to go. This is incredible and puts you into the world like very few games ever do.

The open-world itself has all the generic activities you would expect but has a little spin on them. Conquering bases and collecting items is what you would expect but finding upgradeable charms has you platforming up to a shrine to pray at, or following a fox as it leads you to a shrine, or playing a mini-game to cut bamboo and more. All these activities are true to Jin and his nature and do just enough to disguise their genericness.

Combat is the next major part of the game and as expected, Sucker Punch knock it out of the park. As first it appears like a generic hack and slash game but there’s quite a bit under the hood. You can’t get by in this game by mashing the attack button, it will result in death. Dodges and parries are the keys to success and the wide variety of enemies constantly change the timing on these. This is awesome, you’re always a couple of hits from death so you have to take care. There are four sword stances with each fairing better against different enemy types. If you get these mastered you can become unstoppable.

Despite being an honourable samurai, stealth is more than viable. There are story reasons to avoid it if you wish but it works as you’d expect. There’s a set of tools, like throwing knives, smoke bombs and bows that fill the expected roles but as a samurai title, sword combat is centre stage and it’s excellent. It shines brightest during the one-on-one duels. After a cool intro, you face off in an amazing dance of death. The highlight of the game is the “standoff” button.

When you approach an enemy you can press the “Up” button to challenge the enemy. You then hold the “Triangle” button and wait for the enemy to strike, if you strike first you can instantly kill them and later chain those instant kills. Different enemy types attack unexpectedly and will try to fake you out. It never gets old, even after 40 hours. All the usual upgrades and outfits are present but it’s how the game gives you these that impressed me. The game does everything to keep numbers away from you. I can’t state enough how great this decision is, it wants you to enjoy it for what it is.

Ghost of Tsushima isn’t the most technically impressive game when it comes to its visuals. It might not have the best character models or the best textures but I can say it’s one of the best looking games I’ve ever played. The natural beauty almost verges on fantasy but the game constantly had me saying “Wow” out loud. The incredible draw distance is perfect to show off the beautiful colour palette and physics-driven flora. Grass and trees sway in the wind, which you can control and it’s very impressive. Sucker Punch uses their excellent particle and volumetric system to complete the visual package, it’s absolutely stunning. The voice-work is generally excellent in both English and Japanese and in the end, I actually preferred the English version. The soundtrack is breathtaking, this is one to buy for sure. It has the classic Japanese style with a very slight modern twist.

There are a few issues in regards to animations and frame dips when you use the wind system too much but it’s stable on the whole. The biggest issue I have is that no matter how well it tries to disguise it, it still falls into the open-world trap. That being said it does more than enough to be enjoyable and doesn’t always feel like a chore. If you’re looking for a beautiful open-world game, with a good story and excellent combat, Ghost of Tsushima is a more than a safe bet.

Ghost of Tsushima was reviewed using a digital code purchased by the reviewer.