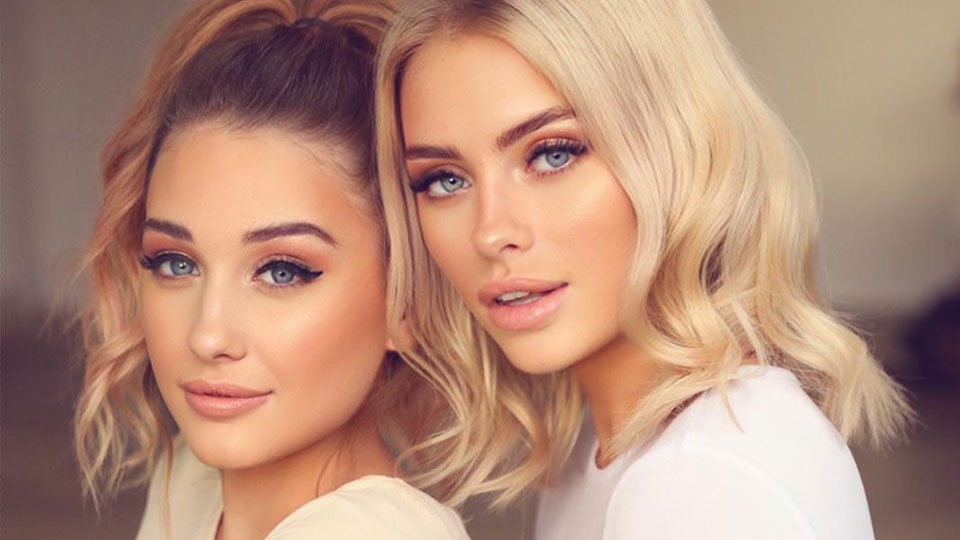 Emma & Jolie are newcomers to the UK Country music scene and they release their debut single I Don’t Need a Man on Friday 10th July.

The duo – Emma Walker and Jolie Harvey – met in 2015 at music college and officially came together as a duo just over a year ago. Since then Emma & Jolie have been working hard writing with the likes of Emily Hackett and Sammy Arriaga in Nashville.

Ahead of the release of I Don’t Need a Man, I spoke to Emma & Jolie about the track, their journey so far and to find out what music has been getting them through the pandemic…

Your debut single I Don’t Need a Man is coming out on Friday. Tell me about the song’s evolution from the acoustic version you played at Stagecouch to the single version people will hear this week…

Emma: When we wrote the song we wanted it to be an anthem. We wanted it to be a really powerful song and upbeat. We went in with the idea that it was going to be a proper anthem. It developed from that. When we went into the studio, our producer knew the vibe we were going for and when we got the track it was perfect. It was exactly what we wanted. We made sure that everything that we did fit in with the idea that we wanted. We couldn’t be happier with the end result really.

Jolie: Before we went in the studio we had a lot of reference tracks. We didn’t want to be a carbon copy but (they were songs we’d been) inspired by and he came up with what we have now.

The song is very current and it sounds like what’s coming out of Nashville right now but I like that you haven’t lost your Englishness. You’re not trying to sound American and your harmonies are so strong. How did you work on getting those so tight?

Emma: To be honest, one of the things that we rate ourselves on is harmonies. When we first started singing it just came naturally and that’s how it started. As we’ve developed our harmonies have developed and it defines our sound. We work on our harmonies so they’re really super tight and in every song, we make sure that there’s a super tight harmony because it makes such a difference to the song. Our voices blend very well together but our voices are quite different so having the mix of the two really defines our sound.

I’ve known about this single for a while now and it must have felt like a long wait for you to get it out there. How are you feeling about the release?

Emma: It’s been a long time coming! We became a duo just over a year ago. We actually signed our management deal with Imogen and Emily (from Triple Fret Entertainment) one year ago yesterday. We knew that we wanted to release something as soon as we could, but we wanted to find the right song. We weren’t going to just release something for the sake of releasing it. We wanted to come in and be like, ‘right, this is our first track. It’s gonna be powerful. We want to make a proper name for ourselves that people are gonna remember this song as being like, a really amazing song’. Once we found that song, we wrote it in November when we were in Nashville with a girl called Emily Hackett. We came out of the session and we were so excited, we were like, ‘this is it!’ We sent it to Triple Fret and they agreed so from then on we just knew that was going to be what we were going to release. We wrote it in November and it’s July now. We’ve known the song for so long and we just want everyone to hear it. To finally know that everyone’s gonna hear what we’ve been like working on for so long is such a good feeling.

Before even releasing a song you’ve picked up a lot of buzz, been to Nashville a few times and played Song Suffragettes. What has that been like?

Emma: When we got the opportunity to do the Song Suffragettes we were like, ‘how has this happened? We’ve not even released anything!’ It was such a shock but we were so happy about it. Triple Fret have been so incredible. We couldn’t ask for two better people to be our managers. When we went into Song Suffragettes, I think we came out of it with more confidence because considering we’d not even been together for a year, to achieve things like that we were so happy and we were so proud of ourselves. That trip to Nashville really helped define us as artists and helped us find our sound.

Jolie: The previous trip we went on was more like a holiday but the November one we were writing every single day. We had two writes a day. It was like a formal work trip. We had Song Suffragettes and we were networking with people. I think that’s helped us as well because being in Song Suffragettes, we’ve been able to make contacts. When people saw that we were going on Song Suffragettes we got taken a bit more seriously because we hadn’t released anything.

Emma: When we went to Nashville, because of Triple Fret, we got in contact with so many people and we’ve been able to write with those people and get really strong songs from that. I feel like knowing these people who are doing really well in Nashville, they’ve recognised what we have and seen potential in us, which has helped gain that momentum. Triple Fret has been great with keeping our momentum in the UK even though obviously we’ve not released anything. They’ve been trying to get us on certain gigs and just trying to make sure that we have a name out there so that people don’t forget about us before we release anything.

There’s nothing like you in the UK Country scene right now so that must be exciting to be able to forge your own path?

The day after the single you are going to be performing as part of the virtual Dixie Fields, which is a big opportunity. How are you feeling about that?

Emma: We actually went to Dixie Fields last year and we were like, ‘oh it would be amazing to do that next year’ and obviously now we’re doing it, it’s so good. The fact that we’ve not released much yet and we’ve had these opportunities, it’s just been amazing for us.

What’s it like releasing your debut single in the middle of a pandemic?

Emma: That has stressed us out a little bit. We’ve been trying to see the positives. We were on a write recently with Laura Oates and she raised the point that now is a really good time as people are on social media. A lot of people are at home and they’re on their phones and things like that. It’s a lot easier for people to stream and I think that in that sense, we’ve been trying to take in the positives of it, obviously. I think as well because we’re releasing it in the summer and it’s quite a summer song, even though there’s a pandemic, it’s still a good time to release this. It is a summer song and people are gonna want to listen to it when they’re having their social distancing garden parties. It’s still gonna be a good vibe for everyone even though it is in the middle of a pandemic. Not being able to go out and perform and promote it has been difficult, and obviously the fact that we haven’t been together – so we’ve been limited on the live streams and things we can do – has been a bit challenging.

Jolie: During the pandemic there’s been so many breakups. I think it’s a really good breakup song for a lot of people that have just split up with their boyfriend after being with them in lockdown for about six weeks. I think it’ll do well in that sense.

What do you have coming up after this single?

Emma: At the moment we’ve been planning our second single. We’re trying to sort out the recording and our producer’s actually been moving studio at the moment. We’ve been trying to find the time to fit in. We’re supposed to be going to Nashville in November so fingers crossed that we’ll be able to go because we’ve got quite a lot of exciting writes out there. I think it’s probably going to be our most successful trip to date so we’re praying that we can get together. Because we’ve not been able to be together and do live streams and stuff that a lot of people have been doing, we’ve just really focused on our writing so that when we come out this pandemic, we’re going to have so much material. I feel like actually since writing in this pandemic we’ve come out with like a lot of good songs. We have at least four songs and we’re not sure how we’re going to choose what to put on the EP, we’ve got so much material now, and this is before we’ve even gone to Nashville. We are confident that even though it’s been difficult, we’ve just been focused so much on writing. The power of Zoom has been been wonderful, keeping us connected with people in Nashville and each other. We’re hoping that next year we’ll have an EP out and I think we’re aiming for October for a second release.

Emma: Yeah, I just really want to perform. We’ve never actually performed I Don’t Need a Man with a full band. We’ve only ever done it acoustic which is really good but having the full like band will just be so good. So we’re hoping that like, however long it is, I’ve been I’m tempted full band is gonna be really good.

What music has been getting you through the pandemic?

Emma: We actually listen to quite a lot of the same music. We listen to a lot of Kacey Musgraves. Old Taylor Swift is what got us both into Country music.

Emma: Yeah, we’re big, big Josh fans. We’ve listened to him a lot. and he definitely inspires a lot of our writing because he’s such an incredible writer. The same with Kacey and Taylor Swift. We’ve definitely been listening to a lot of those really.

Advertisement. Scroll to continue reading.
In this article:Emma & Jolie