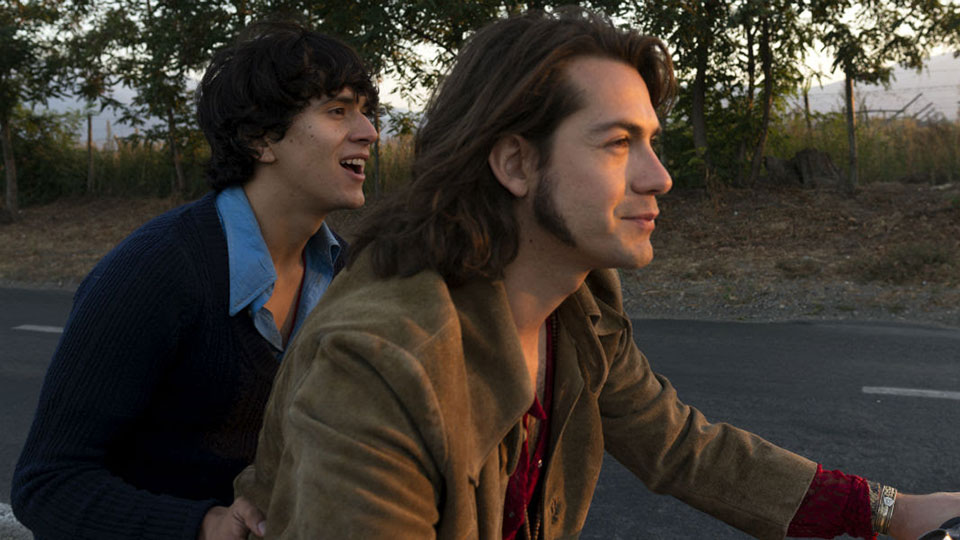 Jaime (Juan Carlos Maldonado) is sentenced to serve time in a prison in Santiago, Chile following a violent incident that ended up in murder. On arrival at the prison, Jaime is taken under the wing of The Stallion (Alfredo Castro), a manipulative older man that holds power within the prison and who chooses Jaime to be his new ‘Prince’. As Jaime spends his days pleasing The Stallion, in any way he’s asked to, he thinks back to the crime he committed and the decisions he’s made in his life that resulted in his imprisonment.

The Prince is a 1970s set prison drama from writer/director Sebastián Muñoz. Taking inspiration from the likes of Midnight Express and based on the novel by Mario Cruz, the film is an unflinching and at times unsettling look into life in a Chilean prison. When Jaime first meets his prison mates, the pecking order is immediately established as The Stallion throws out his younger lover in favour of the handsome new prisoner. A harrowing rape scene follows where The Stallion exerts his dominance and it’s the moment that begins Jaime’s journey into understanding, and confronting, his sexuality and choices.

Interesting Jaime starts to develop feelings for The Stallion, whether out of fear or out of some twisted version of Stockholm Syndrome, and the two men form an unlikely but strong bond. That becomes pivotal to the film when warring factions clash and Jaime finds himself on The Stallion’s side. Throughout the film we get flashbacks to Jaime’s life prior to prison and the circumstances that led to his imprisonment are revealed. By all accounts he was spending his life living a lie in fear that he couldn’t be his true authentic self, thanks to the expectations of society.

In prison, Jaime finds himself in an almost utopian situation where every man he encounters is handsome and happy to fornicate. That part of the story feels a little unrealistic but I think Muñoz is trying to highlight how prison has opened Jaime’s eyes to his sexuality and how he could life his live should he choose to embrace who he really is. As Jaime’s head is turned, and he tries to remain loyal to The Stallion, he gets caught up in a war between the inmates that’s bubbling under and that the prison guards have no interested in diffusing.

The performances from the two leads are strong. Juan Carlos Maldonado and Alfredo Castro form a believable chemistry as their power struggle unravels during the film. Castro in particular is terrifying as the brutal and unforgiving master of the prison. The rest of the cast don’t get very much development so it’s hard to say too much about their characters.

The Prince is a well-made film that may veer too far into idealism at times to be truly special. The uncomfortable shift of Jaime from victim to willing slave will make you feel unsettled but I think that’s what the director was trying to achieve. The Prince draws from many films that have come before it but it’s a solid watch with strong performances and a couple of decent plot twists to keep you hooked.

The Prince (El Principe) from artsploitation on Vimeo.