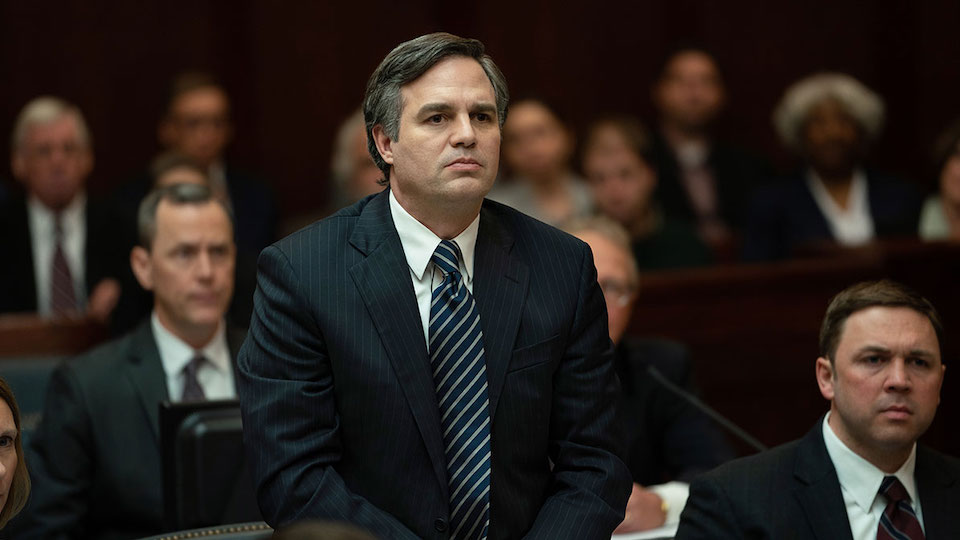 Beginning in the late 90s, Rob Billot (Mark Ruffalo) has just been made partner at the prestigious law firm of Taft Stettinius & Hollister, when a farmer named Wilbur Tennant (Bill Camp) barges into his office. Tennant claims that DuPont have poisoned his land and killed all his livestock. However, as a lawyer working for Taft—a firm that represents corporate clients in the chemical industry—Rob doesn’t think he can help him.

He agrees to visit Tennant’s farm, and makes a harrowing discovery. The land and livestock have all been infected. Tennant’s herd has nearly all died, with the cows driven mad, their organs bloated, and their insides filled with cancerous tumours. On the drive into town, Rob even notices some children with black teeth. What exactly is in the water in this town?

The search for the answer to this question will have profound implications on both the professional and personal life of Billot, as well as shocking revelations for the entire world. It’s no spoiler—this is a widely reported story—to say that DuPont used a chemical (PFOA-C8) in the production of numerous consumer goods that was known to cause cancer. They knew it, and they covered it up for decades.

Dark Waters plays out somewhere in the middle ground between Michael Mann’s The Insider, and Steven Soderbergh’s Erin Brockovich. It has that classic whistleblower thriller feel to it, whilst also being about the crusading ‘everyman’ who takes on the titans of industry. Unfortunately, it’s not quite as good as either.

The film covers an awful lot of ground, and inevitably some elements feel underserved. There’s Rob’s career, his homelife and family with wife Sarah (a wasted Anne Hathaway), and the physical and mental toll the case against DuPont takes on him. That’s enough for one film. But there’s also the minute detail of the case, the complex science, the travails of the Tennant family, then another family from the same town takes action against DuPont, and then all the different legal teams. It’s a lot to squeeze into two hours.

Ruffalo does an excellent job in the lead role, delivering an understated performance of a man who sacrificed his career and his health to do the right thing. You completely believe him as this person. Some of the other big name cast members fare less well. This is a film that is deep in the weeds of the details and the complex legalities. It feels very authentic. So when Tim Robbins and Anne Hathaway pop up occasionally to chew the scenery it really takes you out of the film.

Dark Waters is a very stylishly put together piece of work, as you would expect from a Todd Haynes picture. There’s a rich texture to the image, with every frame lavish with subtle detail. Cinematographer Edward Lachman lights the film in vivid tones, lending the scenes in courts and law offices a sickly, fluorescent pallor, whilst the scenes in West Virginia—where DuPont have been dumping toxic sludge into the earth—have a scorched grey and deathly appearance.

Overall, there’s a quiet power to Dark Waters. There’s no grandstanding or melodrama, but it’s a stealthily political film. From the subtle class prejudice we see against Rob and his ‘hick’ client, to the low-key yet scathing indictment of corporate America – a system of such rampant capitalism that it allows those with money and power the freedom to knowingly kill people for profit. It’s all in there, but it just doesn’t hit home quite as hard as it really should.

On the disc there are three short featurettes. The Cost of Being a Hero is a mix of interviews and behind the scenes clips, exploring the courage it takes to be a whistleblower, and the level of alienization that comes with it. The Real People reveals that a lot of the people whose lives were impacted by DuPont were on set every day to share their stories with the cast and crew. Finally, Uncovering Dark Waters takes a closer look at the development of the film, and the journey to bring it to life.