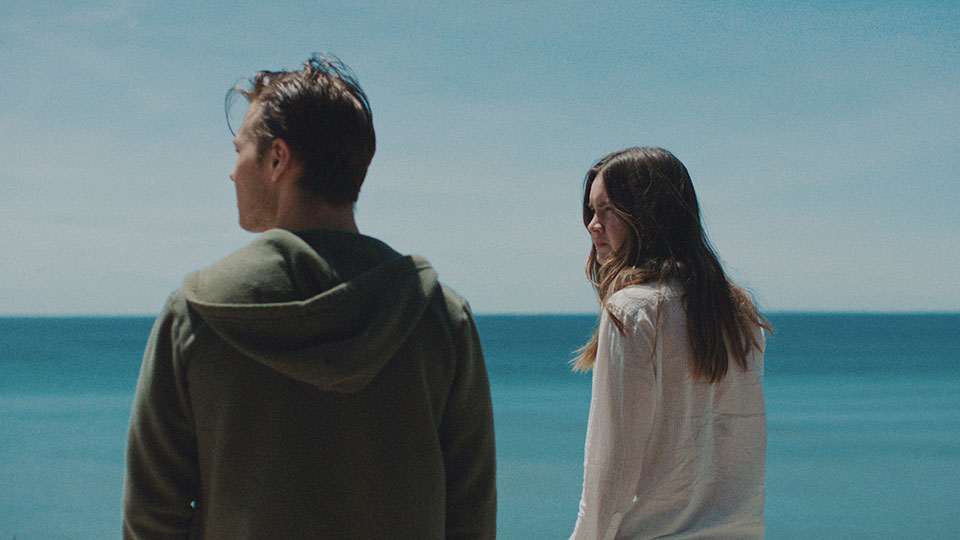 College sweethearts Emily (Liana Liberato) and Randall (Noah Le Gros) make a trip to a family beach house to try and sort out the issues in their relationship. Shortly after arriving, they discover the house has already been rented out to older couple Mitch (Jake Weber) and Jane (Maryann Nagel) and the four agree to stay there together. After dinner, Randall convinces everyone to take recreational drugs and that leads into a nightmarish fight for survival as a strange force emerges.

The Beach House is essentially The Fog and The Mist for a new generation. Putting two beautiful teens at the centre of the film, director Jeffrey A. Brown aims to unsettle and disorient the viewer throughout. What starts off as an intriguing, if not a little too slow, horror/drama transforms into a more urgent drug-induced nightmare. Once you get past the idea that a teenage couple would happily share a beach house with an older couple they don’t know (and never check out), there is some fun to be had but not as much as you’d hope.

The introduction of drugs to create a plot twist is overused in horror and it does a disservice to the story here. The drugs act as a way of making the characters unreliable narrators with the viewer wondering if what they’re seeing is real or not. As the strange, and unexplained, force outside the house starts to affect the four central characters, the horror element of the film finally kicks in but by the time it does, you may have already grown weary of the film.

Perhaps where the film really falls down is with its characters. None of them are fleshed out sufficiently for you to care about and while the performances are good – particularly Liana Liberato – you don’t really become emotionally involved with them. As a horror fan I appreciate that character development isn’t often a staple of the genre but there’s nothing here to make you care one way or the other.

The Beach House is sadly nothing more than a trope ticking exercise from a writer/director who has clearly been inspired by the horror genre. The film doesn’t add anything new to the genre and for many viewers it may simply be far too slow for them to get past the first 30 minutes. Save for some impressive special effects, and solid performances, The Beach House is a disappointment and it’s not somewhere I’d recommend you check in.

In this article:The Beach House