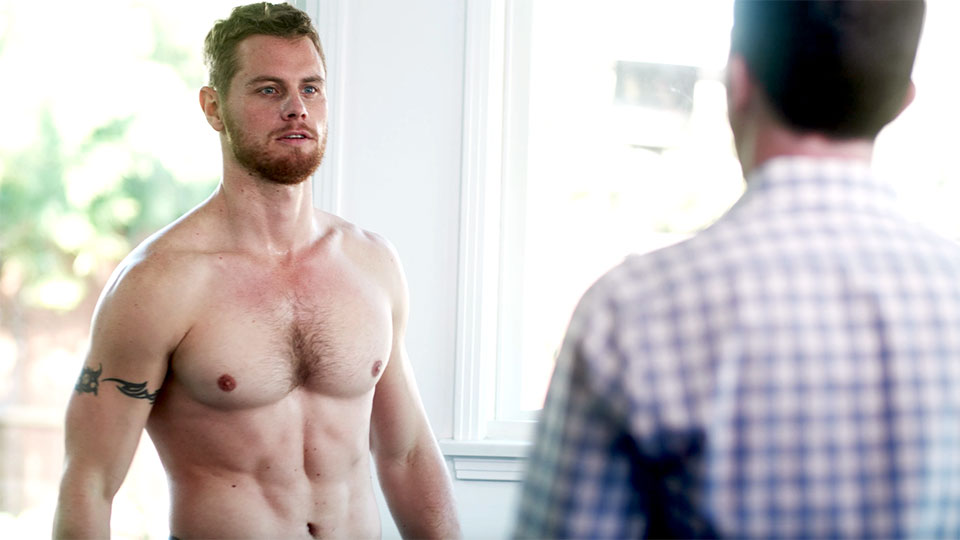 Honey Do List, the follow-up to the award-winning short The Handyman, is available on Dekkoo today.

The charming and sexy short revisits Walter (Nicholas Downs) and his handyman boyfriend Frank (Derek Ocampo). Their relationship is put under threat by the arrival of hunky new handyman Dirk (Drew Canan), who has more than fixing household problems on his mind.

I caught up with Drew to talk about his character, discuss working in various stats of undress and to find out about his experience working with Nicholas Downs…

Hi Drew. How are you today and how have you stayed sane during the last few months?

I’m doing great today, thank you! During these times I have been staying focused on my physical and mental well-being so that I come back into the new normal recharged and ready to go. I have used this time for reflection and concentration on who I am and what I would like to change about myself moving forward. Also, rest, rest, rest!

You play Dirk, the new handyman, in Nicholas Downs’ new short Honey Do List. How did you get involved and why did you want to play the character?

I am also working on a recurring role in another short series called Bad Boy written and directed by Artie O’Daly. Nicholas had seen the series (which is on-going still) and contacted Artie to see if he could get my info. Bing, bang, boom! Nicholas then contacted me about the role of Dirk! We met for coffee to get to know each other and talk about the character and I enjoyed it so much that by the end of the meeting I came on-board with the project. In addition to loving the character I would be playing, I really loved the over-all short film itself. It was funny, quirky, and light-hearted.

Dirk has an ulterior motive and spends a lot of time in the short without many clothes on. How did you prepare for those scenes and did you feel nervous?

Ha! Yes, I do lose articles of clothing throughout! It’s one of the mechanics of the comedy behind the short that I thought were tastefully done and flat out FUNNY! Preparing for the role was easy! I already work out five days a week and I simply adjusted my diet so that I’d be confident within each scene on the day of filming. I play a similar type of role in the Bad Boy series I mentioned too, so its an environment that I know well!

I don’t feel like Dirk is a character that would give up easily so would you like to explore his story more in another instalment?

I would LOVE to explore Dirk’s character more in future instalments! Dirk is absolutely a go-getter and I think it would be fun to see him show up again. The fun thing about this short is that, even though it’s only minutes long, it gets you invested in who these characters are and leaves you wanting more. That’s the fun of playing a character so full of life, you want to see what he/she will do next!

Nicholas was great as a director! It was his first time putting on the directing hat, and because he is also an actor, he gave a lot of attention to the process of the actor. That’s always nice when a director knows there is a process and caters to that. On top of that, he knew what he wanted and was able to communicate any adjustments needed in a very proactive and productive way. I can’t wait to work with him again!

What else are you working on at the moment?

As I mentioned, I am working on an on-going series called Bad Boy that can be found on YouTube. I play a character named Jim who shows up around episode #7 to join the ranks of some amazingly talented and funny cast members. The story focuses on the main character, Scott (also played by Artie O’Daly) who has found himself mixed up with this rag-tag bag of off-the-wall characters and has to navigate his own life problems with them constantly showing up! It’s really funny, go check it out!

As far as a follow-up to Handyman, Nicholas has mentioned he has another installment in the works which may include bringing back Dirk! So I’m excited for that too!

In this article:Drew Canan, Honey Do List, Nicholas Downs