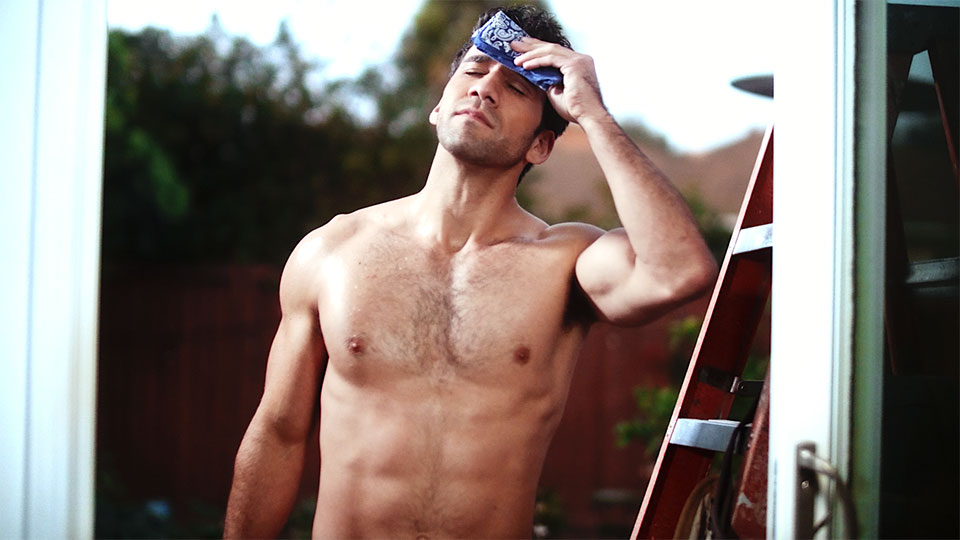 Derek Ocampo is known for his role in the web series Steam Room Stories and his turn as Frank, the handyman, in the short The Handyman.

For his latest film, Derek has reprised the role of Frank for Nicholas Downs’ directorial debut Honey Do List. In the new short Frank has competition for his boyfriend Walter’s (Downs) affections when a new handyman arrives on the scene.

I caught up with Derek to talk about reprising the role, discuss the future of the series, and to find out how he’s been doing during the pandemic…

Hi Derek. How are you and how have you been keeping busy during the pandemic?

I am very thankful and staying positive. During the pandemic, I’ve been fortunate enough to keep working my part-time jobs to keep my head above water, I have been keeping busy doing self-tape auditions to keep my acting sharp, and of course adjusting my exercise routine to home workouts.

You’re back as Frank in Honey Do List. Why did you decide to reprise the character?

-I wanted to return to the role because I had such a great time working with Nicholas and his crew and it was such a fun experience. I’d reprise the role ten more times if Nicholas wanted me to… Also, who else is gonna play Frank???

This is Nicholas Downs’ first time as a director. What was it like working with him as a director as well as a co-star?

I know it can be a big challenge playing the lead and directing your own production, but Nicholas managed to pull it off masterfully. The story is his vision and he had no problem conveying to me what he wanted from my performance and keeping consistent with his own character.

Your character only briefly meets Dirk, the new handyman. Do you think there’s more story to be told there?

I definitely think the story doesn’t end here. I’m sure we’ll see more of Dirk if Nicholas decides to make it a trilogy.

What else do you have in the pipeline at the moment?

Currently I am working on online advertisements that have been appearing on platforms such as Facebook, Instagram, and Amazon which has been very exciting. Also, there’s been talks of a Handyman 3, which I would be more than happy to be on board for.

Honey Do List is available to watch on Dekkoo now.

Advertisement. Scroll to continue reading.
In this article:Derek Ocampo, Honey Do List