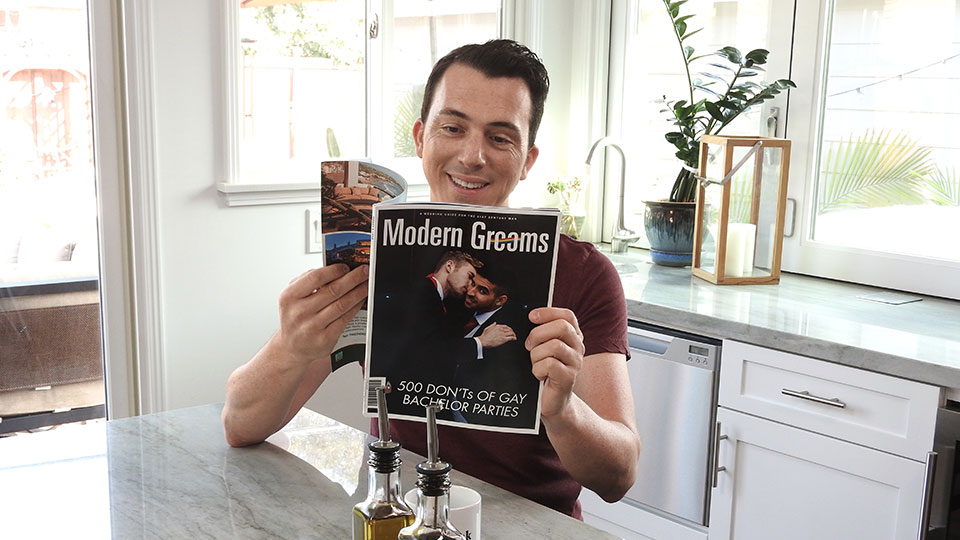 Nicholas Downs first came to our attention in JC Calciano’s fantastic romantic comedy Is It Just Me?

Since then he’s gone from strength-to-strength as an actor, a writer, a producer and now a director. Tomorrow (Wednesday 17th June) Nicholas releases Honey Do List, the follow-up to his award-winning short The Handyman and his first project as a director.

I caught up with Nicholas to talk about Honey Do List, discuss the acclaim The Handyman received and to find out if there will be more instalments in the future…

Hi Nicholas. How are you today and how have you been coping during these difficult times?

Hey Pip, I’m doing well today. Thank you. It’s been an adjustment for all but my family and I have been staying safe. I hope you and your family are doing well too.

Your short film Honey Do List is coming out on June 17th. The film is the follow-up to The Handyman. Why did you decide to continue that story?

Originally when I came up with the idea for, The Handyman, I had thought of it as a one off. But pretty much as soon as I finished it, I felt there was more of the story to tell. Also, the reaction to it from fans and Dekkoo’s excitement about it really helped to usher that along.

This marks your directorial debut. How was your first time as a director and what challenges did you face?

It was very exciting for me and a little scary, in the best way possible. One challenge was bridging the gap of being an actor and playing a role but also directing the film. Making sure I lived up to my performance while keeping an eye on all performances and the look of the film overall.

You reprise your role as Walter in the short too. How did you manage to juggle your roles as an actor, producer, writer and director?

Well I had a great cast and crew in place, people I’ve worked with before, so the trust was there. And I tried to compartmentalize as much as possible, i.e. getting as much of the ‘producing’ done beforehand, so that on the day I could focus the most on acting and directing. But as in any project those other roles filtered in and I handled them as they did.

Drew Canan is a new addition to the cast playing new handyman Dirk. Why did you choose him for the project and what was he like to work with?

I had seen Drew’s work in Artie O’Daly’s webseries, Bad Boy, and by this point had my script for Honey Do List. After watching a few episodes I thought, he’s perfect. Drew and I met for coffee and I soon realized that not only is he talented but he’s an incredibly nice and sincere guy.

Derek Ocampo is back as Frank and this time the relationship between Walter and Frank has progressed. How easy was it to recreate the chemistry you two have?

Very easy. Derek is also a great guy. Easy going, committed and genuine. So connecting with him in person and through a character is easy.

The Handyman garnered plenty of acclaim and it’s an award-winning short. How do you feel about the reception it received?

A lot of the reception I received was that it made people laugh, it put a smile on their face, they thought it was cute. That’s what I set out to do with it and it seems to have worked. Can’t ask for more than that.

Will there be any more instalments in the series?

Yes, the plan is to shoot a third short film called, The Wedding Plan. The film will bring back all the actors plus a new one. Perhaps a new love connection? I’ll leave it at that…

What would you say is the biggest thing your learned while making Honey Do List?

That if I set my mind to it I can do it. Even shorts can be a lot of work, but if the will is there it can happen. And I think I got bit a little by the directing bug.

My goal is to finish writing and shoot, The Wedding Plan, and then see what other stories inspire me. Maybe switch up the genres some, do more of a drama or a thriller perhaps.

Honey Do List is released on Dekkoo on Wednesday 17th June 2020.

Advertisement. Scroll to continue reading.
In this article:Honey Do List, Nicholas Downs