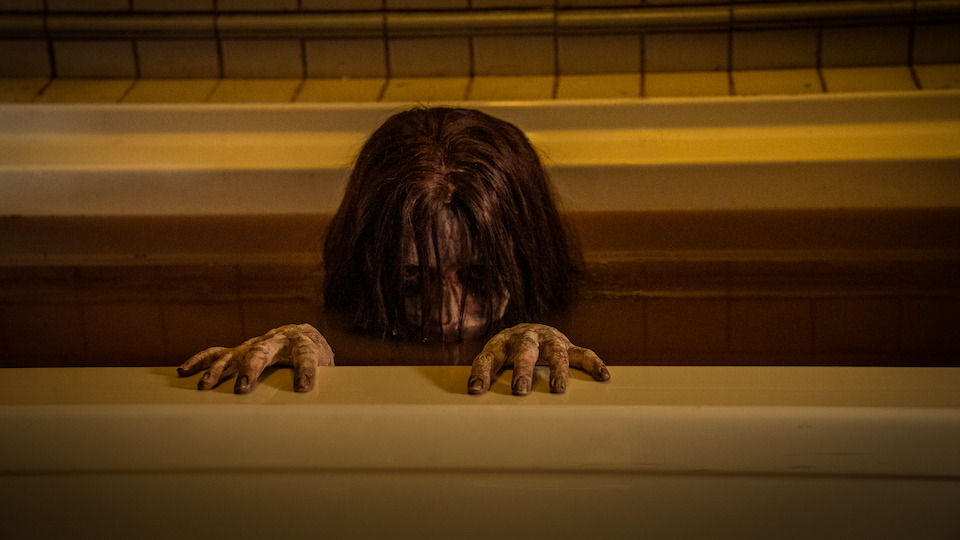 A question – has any horror franchise in history yielded so much from such scant material? The Grudge franchise (created by Takashi Shimizu and Rumiko Takahashi) is the story of a cursed house in the suburbs of Tokyo. A violent murder happened there, and the spirits of the deceased haunt the house and curse—and then kill—anyone who enters.

To date, this very basic plot has resulted in two short films, two TV movies, two Japanese feature films, two US remakes, three more short films, a third American film, two Japanese straight-to-DVD spin-offs, three more Japanese feature films, including a crossover with the Ringu franchise, and now this film, which is a sort of sidequel to Ju-On: The Grudge from 2002, and the 2004 US remake and it’s sequels. And that’s before you get into the novels, comics, graphic novels, and video-games.

This latest continuation of The Grudge saga is written and directed by Nicolas Pesce, and plays most of the same beats as the other films. It follows the disjointed vignette narrative style of the original 2002 film, but this time offers an overarching story of a police investigation. We therefore get a plot spanning two years that includes a family where the mum has just returned from a job in Tokyo (uh-oh), a couple who are about to have a baby, an elderly man whose wife is rapidly declining with dementia, and then two cops investigating the violent crimes at a house that links all of these together.

The cast is surprisingly starry for a low-budget horror film. John Cho and Betty Gilpin appear as the young pregnant couple. Frankie Faison and Lin Shaye play the elderly couple, with Jackie Weaver also featuring in their part of the story. Williams Sadler plays a cop haunted by the curse, and Andrea Riseborough and Demián Bichir are the two detectives investigating this bloody mess.

And boy oh boy is it a mess. Pesce sets out to bring an art-house sensibility to the film. Every frame is suffused with either blanket darkness or a sickly, nicotine stained filter, which I suspect was to make the film seem darker and grimier, and make us take it all more seriously. Unfortunately, it just makes it feel oppressive and ugly. Pesce piles on surface-level atmospherics, and practical gore effects, but then fundamentally forgets to make the film even slightly scary.

Now I don’t consider the original 2002 film a classic by any means, but at least Shimizu’s film had a sense of creeping dread, and an understanding of how to use negative space. All of that is gone. Replaced by loud bangs, telegraphed jump scares, and every scene just completely shrouded in murk and shadow. Anything of real impact is just lifted straight out of the previous films, such as the bedcovers being pulled down, the hand in the shower, and of course the iconic, gurgling throat click of Kayako’s ghost.

The performances from the talented cast are all fine—Riseborough’s naturalistic turn as the recently widowed Detective Muldoon is by far the standout—but they are wasted in this empty, sludgy film. Even at a brisk 94-minutes I found this an absolute slog to sit through. The nonlinear structure means you never really feel invested in any of the characters, which is a problem most of the films in this franchise have suffered from. It is also relentlessly grim. A miserable, joyless, scare-free—and above all—dull experience.

If you want more of it however, the blu-ray disc comes with 30-minutes of deleted scenes. There’s also a short featurette about the making of the film, with interviews with Pesce and producer Sam Raimi. There’s another short piece about the cast, featuring them all speaking very gushingly about the movie. Finally, there is a piece with the director talking us through some of the film’s easter eggs and references to the previous versions.