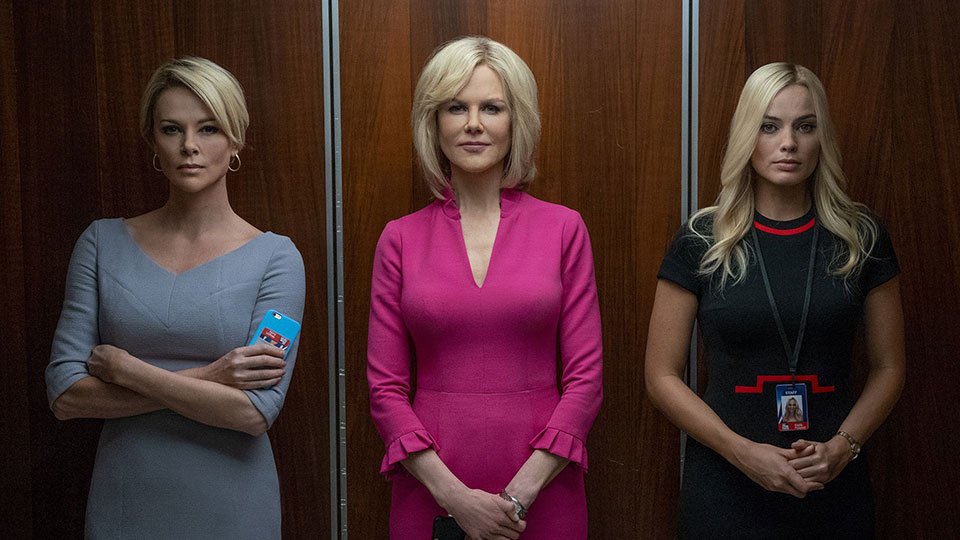 American journalist and news reporter Megyn Kelly (Charlize Theron) battles her way to the top at FOX News, navigating her way around a toxic environment that is presided over by the network’s president Roger Ailes (John Lithgow). When her FOX colleague Gretchen Carlson (Nicole Kidman) files a sexual harassment lawsuit against Ailes after being fired from the network, Megyn turns to fledgling reporter Kayla Pospisil (Margot Robbie) to take down Ailes and make a permanent change for the women in the organisation.

Bombshell is based on the true events that took place at FOX News in 2016. Gretchen Carlson’s bravery in speaking out against Ailes created a domino effect at the network with a number of women, Megyn Kelly included, coming forward to share their stories of how they had been treated. For Bombshell, writer Charles Randolph created the character of Kayla Pospisil to represent a number of women who spoke out about Ailes treatment towards them.

Across the three characters, the film gives a broad spectrum of what women endured under Ailes reign. Gretchen experienced sexual harassment and ageism, Megyn navigated her career following sexual advances from Ailes, and Kayla represents the young upstarts who felt they had to compromise themselves to get ahead. It’s an incredibly powerful story that’s as compelling as it is shocking. In the wake of the #MeToo movement, so many of these kinds of stories have been uncovered and told, but it never gets any less shocking.

What Bombshell does so well, is it really takes you inside the FOX News network. From the central three women to the supporting characters, such as lesbian journalist Jess Carr (Kate McKinnon) who keeps her head down so no one makes a fuss of her sexuality due to the network’s overtly conservative views, the film gives a really fascinating insight into the struggle and realities of these women’s daily lives. I also think it deserves credit for not just demonising all of the male characters too but actually giving them well-rounded characters.

The three lead performances are incredible. Charlize Theron is unrecognisable as Megyn and she captures her mannerisms and voice remarkably well, while Nicole Kidman, who is always a reliable actor, brings emotion and vulnerability to her role as Gretchen. For me though it’s Margot Robbie who emerges as the star of the film. Free from the pressure to imitate a real-life person, she really takes you the ride of what it’s like to be a young naïve (and beautiful) would-be reporter who gets swept up in obligation and pressure in an attempt to further her career. One particular scene between Kayla and Ailes will leave you feeling sick in the pit of your stomach as she’s told to pull her skirt up and twirl for her boss.

Bombshell is an eye-opening film. Released following Ailes’ death, it gives the women he harassed an opportunity to tell their stories and move on with their lives. Anchored by three incredible performances, Bombshell shows what women have had to go through in their professional careers to get the same opportunities as men. It’ll make you feel queasy but you’ll feel a sense of satisfaction and hope by the time the credits roll.