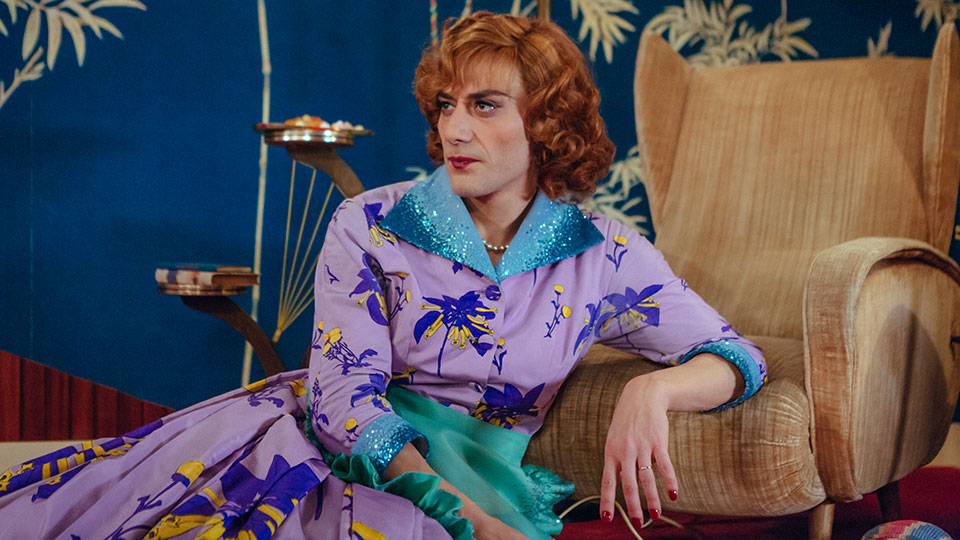 Mrs Fairytale (Filippo Timi) lives a seemingly perfect life in her brightly coloured Los Angeles home during the 1950s. Underneath the forced smile and perfect outfits, Mrs Fairytale is struggling with her life and she meets daily with her friend Mrs Emerald (Lucia Mascino), who is also unhappy with aspects of her life. As Mrs Fairytale starts to deal with her unhappiness, she goes on a journey of personal discovery she doesn’t expect.

Fairytale is based on the play by Filippo Timi, who stars as Mrs Fairytale in this film adaptation. Directed by Sebastiano Mauri, Timi’s husband, the film is obviously a passion project and a very personal one for the couple. Essentially Fairytale is an exploration of freedom and the expectations placed upon women both in the past and in the modern day. Mrs Emerald doesn’t like the way that Mrs Fairytale is being treated by her husband while Mrs Fairytale harbours the knowledge that Mrs Emerald’s husband is cheating on her with other men.

The two friends meet daily and their interactions become more and more wacky. They also realise at the midway point of the film that perhaps their feelings for one another are more than simply platonic. That serves as a catalyst for the two women to work together to liberate themselves from the shackles of their lives and the societal norms that weigh down on them. Mrs Fairytale has her mother in her ear to remind her that a woman’s place is to be a good wife but she can’t stop herself from wanting more.

Visually Fairytale is a work of art. The costumes and the sets are stunningly colourful and vibrant. It adds an energy to what unfolds onscreen and it’s a heightened version of the Stepford Wife style American housewife we’re all very familiar with. The performance of Filippo Timi is very strong and he has the ability to make you forget that you’re watching a man dressed up as a woman. He’s as strong in the comedy moments as he is in the darker ones.

Fairytale is an interesting film and there’s lots to take from it. You can see how it worked on stage and it translates mostly well to film. A little streamlining here and there could have benefitted the film but regardless it’s an enjoyable and layered story. To be honest, it’s worth watching alone just for the fantastic set design!