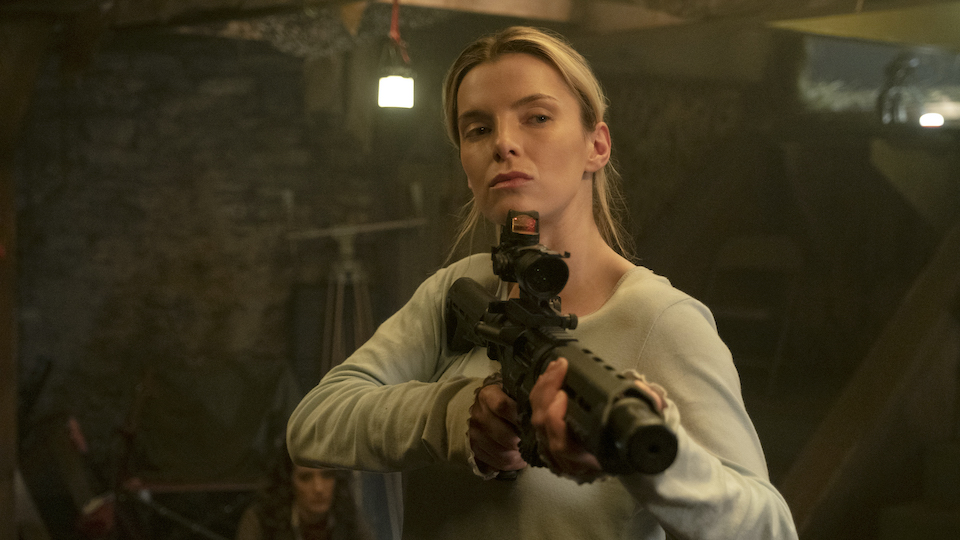 Much like the recently released South London gang drama Blue Story, Craig Zobel’s The Hunt has had to overcome a huge amount of controversy and pearl-clutching media coverage on its way to being seen by audiences. It’s worth noting however that just like Blue Story, the controversy around The Hunt has turned out to be absolute nonsense.

Following in the footsteps of The Most Dangerous Game, Battle Royale, The Hunger Games, and Hard Target (to name but a few) The Hunt is another variation on the humans hunting humans sub-genre. In this case, a group of people wake up gagged in the grounds of a palatial manor, apparently in Arkansas, and start being hunted by unseen assailants. The opening salvo of sniper fire, bows and arrows, grenades, mines, and spike filled ditches, is an entertaining and extremely bloody intro to the film.

But wait, this just sounds like any number of exploitation films you’ve seen over the years, why all the controversy? Well, just before it was meant to be released last year, there were two mass shootings in America. With the country reeling from yet another gun-related tragedy, a slightly simplified and misconstrued version of the film’s plot started doing the rounds in the media. For you see, the hunters are “liberal elitists” and the hunted are Trump supporters. Or to use the now toxic phrase from Hilary Clinton’s doomed 2016 campaign, they are the “deplorables”.

However, The Hunt is not the film you were led to believe it would be. It is in fact a satire – not a very clever or biting satire I might add – of the stereotypes you see depicted in the political hysteria and tribalism of the culture war in America. Us versus Them. The sneering lefty snowflakes with their intellectual superiority and liberal white guilt versus the dumb as fuck right-wing libertarian MAGA nutcases. Not sure what I’m talking about – just go onto Twitter and wait for Donald Trump to tweet something, and then read the replies. That seems to be what the screenwriters did.

The film is blunt and broad, and none of it really hits whatever the intended targets were supposed to be. It seems to want to get in as many current political hot-button topics as possible in the space of 90-minutes, which drains the film of tension and ends up with it feeling a bit muddled. It’s a shame, because this could have been a razor-sharp little B-movie

There’s definitely some fun carnage to be had on the way, and Betty Gilpin is great as the “deplorable” with a few more resourceful skills than the “liberal elites” were expecting. It’s also quite interesting that the film dramatically and emotionally sides with the “deplorables” who in real life were the ones howling into the void for it to be banned. Ultimately it serves as a silly and enjoyably cartoonish look at the political climate in America, which you can switch off and enjoy for its dark humour and visceral thrills. But it does feel like they’ve missed an open goal here.

THE HUNT is now available to rent at home on demand across a wide range of digital platforms in the UK.

In this article:Betty Gilpin, Craig Zobel, Hilary Swank, The Hunt