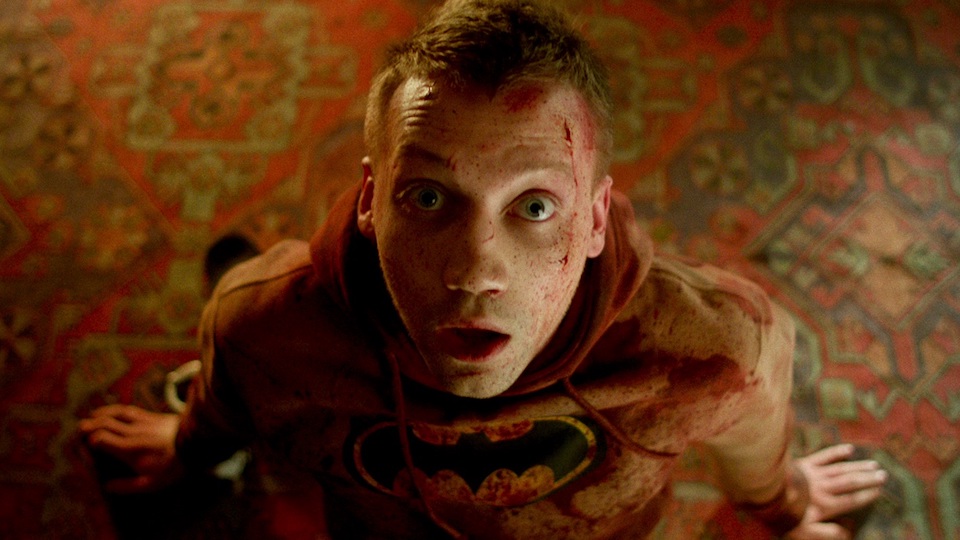 Director Kirill Sokolov announces himself to the world with this remarkable debut. Why Don’t You Just Die! is an ultra-violent experiment in genre filmmaking, set almost completely in a single room. Hyper-stylised, hilarious, and superbly choreographed carnage, this is extreme cinema but on an extremely intimate scale. Styled in vivid greens and reds, and punctuated with stomach churning comic book violence, it’s like an unholy collaboration of Almodovar and Tarantino.

The scene is set in the spectacular opening 15-minutes when Matvey (Aleksandr Kuznetsov) arrives at the apartment of police detective Andrey (Vitaliy Khaev – think a Russian Vic Mackey) brandishing a claw hammer, with the sole intention of bludgeoning the cop to death. He claims to be the boyfriend of Andrey’s daughter, but other than that, we don’t know why he is doing this. But Andrey is more than capable of handling himself, and the two men proceed to smash the living shit out of each other.

Andrey gets the upper hand, and shackles Matvey in the bathroom. From here, the violence escalates into a spurting bloodbath of horror. Sokolov then takes us out of Andrey’s living room for a few brief flashbacks, introducing us to his daughter Olya (Evgeniya Kregzhde) and his partner on the force, Yevgenich (Michael Gor). Slowly but surely the pieces of the puzzle start to come into a woozy and slightly concussed focus.

There’s some extreme, bone crunching brutality on display here, and a scene with a power drill will live long in the memory. However Why Don’t You Just Die! is also a hell of a lot of fun…just in a deeply disturbing way. It is visually stunning, making the most of the modest and constrained setting with the sort of brilliant camerawork and slick editing that suggests The Evil Dead was very much an influential touchstone here. The strains of Morricone-esque spaghetti western music, mixed incongruously with 80s synth pop add to the overall graphic novel feel of the film.

It is also hilarious. The fight scenes in particular are cut through with a jet-black vein of comedy, offsetting what would be an otherwise almost unwatchable sequence of violence. There are a few reaction shots from Matvey that need to be immediately turned into gifs, and a couple of moments of macabre slapstick – one involving a coffee mug – that had me howling with laughter. This is a great calling card for Kirill Sokolov, and I can’t wait to see what he does next.

The Blu-ray disc from Arrow Video comes with a typically strong selection of bonus material. Why Can’t We Just Leave? is a 25-minute interview with film critic and author Kim Newman. He puts the film into the context of film history, exploring its cinematic roots of Westerns, neo-noirs, and movies bound by single locations.

There are 6 featurettes going behind the scenes of Why Don’t You Just Die!, looking at all aspects of the making of the film. Also included are 4 short films from director Sokolov, as well as the film’s theatrical trailer.

In this article:Arrow Video, Kirill Sokolov, Why Don't You Just Die!