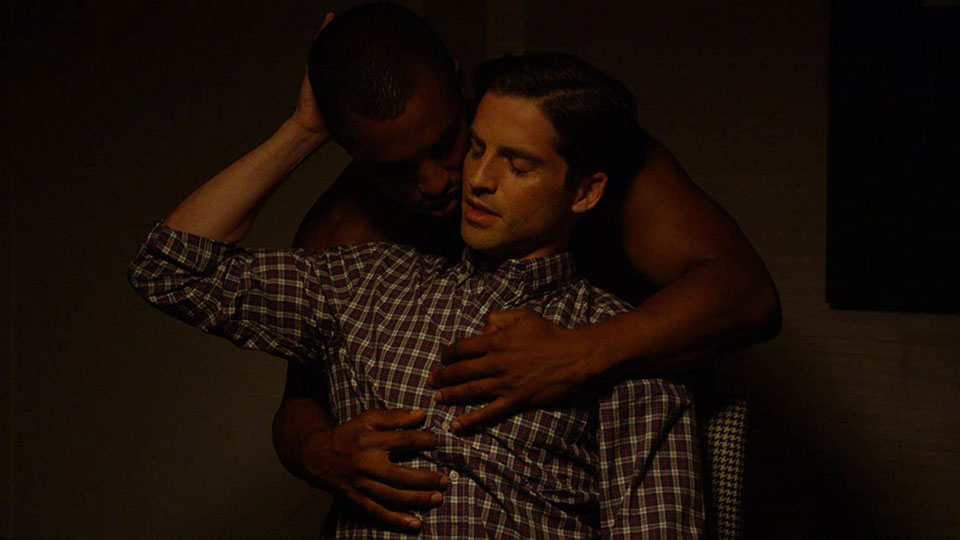 Jack Dickinson (Scott Bailey) is married to Karla (Keili Lefkovitz) and the couple has two children, seemingly a picture of the perfect family. Together for 15 years, Jack is hiding the secret that he’s gay and regularly hooks up with guys. As he tries to suppress that part of himself, with his wife completely oblivious to what’s going on, Jack meets Peter (Darryl Stephens) and the two spark an instant connection. Their meeting changes things for both men and impacts unexpectedly on their lives.

From Zero To I Love You is a surprisingly layered film that’s so much more than the tale of a closeted married man. This isn’t just Jack’s story, it’s also Peter’s and filmmaker Doug Spearman shines a spotlight on two characters battling through their own struggles. For Jack it’s that he doesn’t want to admit he’s gay and break-up his family, but for Peter it’s facing up to a pattern of behaviour that involves relationships with married ‘straight’ men, something his family are trying to break him out of.

There are lots of tropes here that you’ll have seen in other films about closeted men such as Jack regularly sneaking off with whatever hot guy looks his way before returning to his family and playing the doting husband and father. What it does differently is that we see Jack coming to terms with his sexuality, with the help of a therapist, and there are plenty of times he genuinely tries to do the right thing so he can be with Peter and stop deceiving his family.

The added complication is that because Peter knows the cycle of having an affair with married men, he isn’t prepared to wait around too long before moving on to someone else. As he gets his heart trampled over by Jack, he meets the single and less complicated John (Adam Klesh), who appears to be just the man he’s looking for. It’s interesting watching the scenario play out because Jack starts to show signs of jealousy, even though he’s not honouring his promise to Peter, while Peter throws himself into a committed relationship to prove his family wrong.

The performances of Scott Bailey and Darryl Stephens are superb. Scott is a dashing and charismatic actor whose performance makes you root for Jack even though the character is being despicable. You go along with his journey and he’s very, very believable. Darryl on the other hand is a favourite in LGBT cinema and he doesn’t disappoint here. He always brings such realism to the roles he plays and his chemistry with Scott is off-the-charts. They make a magnetic couple.

Jay Huguley is worthy of a mention here too as Jack’s best friend Eric who, like Karla, is blind to his Jack’s behaviour and struggle. He makes an impact in a supporting role and the way he reacts as Jack’s secret unravels create some of the best scenes in the movie. Similarly Keili Lefkovitz shines, particularly when she finally discovers Jack’s secret, giving a heart-wrenching performance.

From Zero To I Love You may tie things up too neatly with a bow at the end but in the middle of a global pandemic, I didn’t care one bit. I felt so invested in these characters and the world that Doug Spearman has created, that I just went along for the ride. I laughed, I cried and I felt hope by the time the credits rolled. In this current climate, that’s worth its weight in gold and I applaud Doug for so sensitively and unflinchingly telling this story.