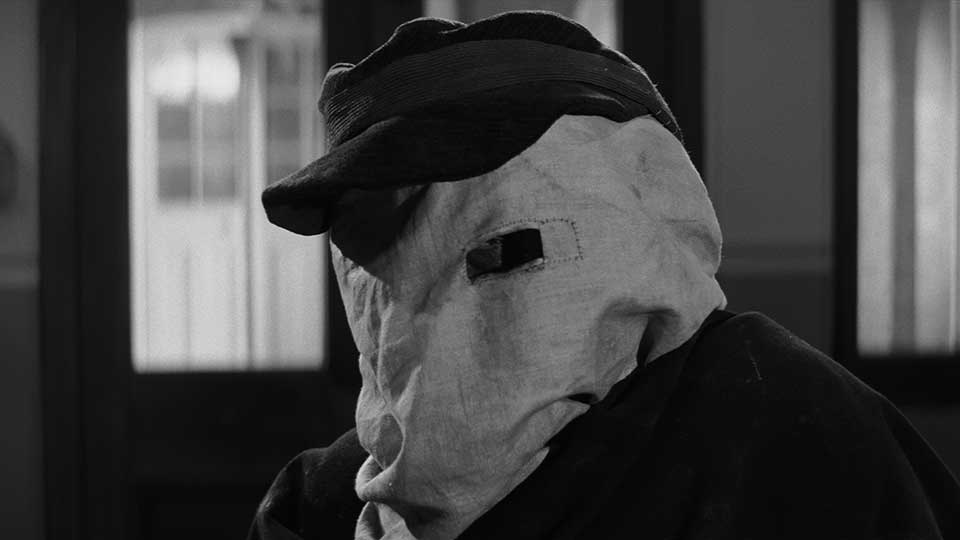 David Lynch’s remarkable 1980 classic The Elephant Man arrives in 4K with an ultra-high definition restoration from Studiocanal, which is available now on DVD and Blu-ray. This follows a limited release in cinemas last month.

The Elephant Man is a slightly fictionalised account of the true life story of Joseph Merrick, a deformed and disabled man living in Victorian London. His physician, Frederick Treves, was a doctor at the London Hospital, and his autobiographical account of his time with Merrick forms the basis of this film.

The fate of ‘John’ Merrick (his name is changed for the movie) reflects both the best and worst of humanity, and it is that dichotomy that makes the story so compelling. At first, Merrick is nothing more than a circus freak, and treated by the vicious Bytes (Freddie Jones), the ringmaster, like one of his animals. Beaten, starved, kept in a cage: Merrick is dehumanised to the point where he remains dumb, and distrustful of everyone. When Treves sets his eyes on him for the first time, it is the possibility of advancing his own career that interests him. He borrows Merrick from Bytes, for a price, in order to show him off to his medical contemporaries as a rare find.

Yet Merrick recites Psalm 23, and speaks beautifully, and has a keen and enquiring mind. After a life of hardship, mockery and brutality, he is finally shown the milk of human kindness at the point where he dares to reveal his own humanity for the first time – his mask finally removed. The Elephant Man is at once touching and brutal, heart-warming and shocking.

David Lynch’s atmospheric black and white imagery does much to sustain the mood of the piece. The monochrome film stock enhances the depiction of late Victorian London, which is captured in compelling detail through costumes, props and well-chosen locations.

Yet it is the performances that make the movie so special. Freddie Jones, a distinguished and versatile character actor, achieves a career high with his depiction of the drunken, selfish, self-pitying Bytes, whose savagery is scarily believable. Michael Elphick also falls into the villainous category, though his character is opportunistic and callous rather than violent. Lesley Dunlop shows great compassion as Merrick’s nurse, who overcomes her initial fear to grow fond of him, and Wendy Hillier provides the love that follows from pragmatism.

There are strong supporting parts for John Gielgud and Anne Bancroft, and Anthony Hopkins provides a solid, grounded centre for the film. Unusually, for his style, Hopkins’ portrayal of Frederick Treves is restrained and understated, but when he truly loses his temper over the foul treatment of Merrick, it’s a moment that impresses. Throughout, we’re reminded of what a magnificent actor Hopkins is when he gives his all to a part. It’s John Hurt who inevitably attracts most of the plaudits. The physicality of his performance as John Merrick is, on a technical level, incredibly impressive. Yet he has to convey everything through his eyes and voice, given that his face, smothered by an astonishing make-up job, is almost immobile. Hurt finds Merrick’s dignity, sensitivity and creativity, and turns a ‘monster’ that on appearances people may be afraid of, into the most humane, forgiving and decent character in the film, who improves the lives of all those who take him to their hearts.

The Elephant Man is one of those rare films that, once you’ve seen it, you never forget it. Everything falls into place. It’s the right director for the right story, and a perfect cast. An eerie circus music signature theme, and the focus on Victoriana that we find endlessly fascinating, add nuance to an incredible story.

The Elephant Man is released over two discs. There are extra features on both, but they include a few interviews with director David Lynch, as well as a 25-minute talk with John Hurt about his approach to playing Merrick. You’ll also find an interview with Frank Connor, the stills photographer who had previously worked on great movies including Don’t Look Now and A Bridge Too Far. There’s a documentary about the real Joseph Merrick, which we found the most interesting extra feature, and the whole release is beautifully packaged and produced to a high standard. If you love The Elephant Man, you need to get your hands on this release.