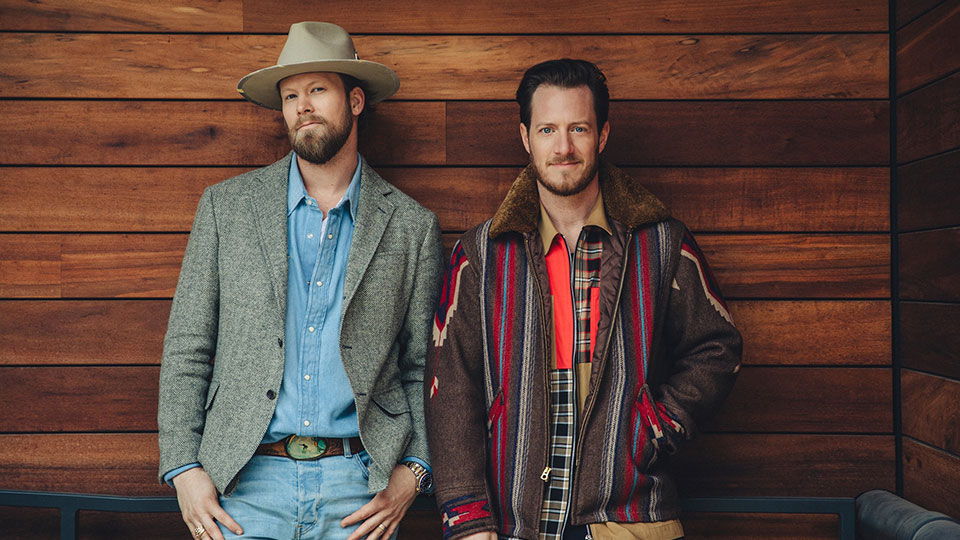 The record-breaking duo are at the top of their game with four huge albums, the latest being 2019’s Can’t Say I Ain’t Country, and an embarrassment of certifications under their belts. They also launched their own record label Round Here Records in 2019, which sits alongside their publishing company Tree Vibez and their Nashville venue FGL House.

To mark the release of the new single, I spoke to Tyler Hubbard – one half of FGL – to discuss the feel-good track, find out more about the duo’s upcoming album and to talk about their overdue return to the UK…

How are you doing?

Are you surviving the corona virus lockdown that we all seem to be under?

We are yeah. We’re surviving and excited for it to pass and in the meantime we’re just staying home and enjoying some good quality time with the kids and the wives. We’re just here at the house so we’re trying to soak it up as much as we can and stay positive.

Your new single I Love My Country came out today and it’s such a feel good track. It feels like you guys had fun with this one. How did the song come about?

Yeah, we did. We had a lot of fun making this one and this song’s been in our world for maybe almost two years. It’s been around and some good buddies of ours wrote it. We just decided, ‘man, this song keeps coming back to us and we keep singing it so maybe we should record it with some of the FGL flavour on it and get it out to the world’. That’s what we decided decided to do and we had so much fun in the studio with our co-producer, Corey Crowder, bringing this song to life. We’re excited that it’s out for the world and we really do hope it brings some encouragement, some joy and some fun to people’s houses the way that done to ours. We had a whole lot of fun making it so we hope that translates

With your last two albums Can’t Say I Ain’t Country and Dig Your Roots, you guys really experimented with your sound and pushed the boundaries. What can we expect from your new album coming later this year?

Our next album is going to be Here’s To The Good Times 2 and it’s a kind of a sequel to our first album. It’s definitely gonna be some FGL nostalgia but at the same time we’re gonna add to it. There’s gonna be some love songs, some spiritual songs and party jam. Sonically (it’s) a little bit of FGL nostalgia. We’re just super excited, man. We’ve been chomping at the bit working hard on making sure we got all the right songs for that. It’s a project we’ve wanted to do for a while but it hadn’t made sense until now. This will be our fifth album. It feels good to get back in that world a little bit, I guess. Also at the same time we never want to make the same record so it’s definitely going to be different but it’s also going to be a little bit familiar. We’re just excited man, that whole time when we came onto the scene and started doing our thing, it was just a certain time period… I don’t know how else to explain it. Even when I hear our first record, it just takes me to a certain time and I think we’ve heard that from a lot of our fans. I think there’ll be some special songs on there that we’re just really jacked about. We’re just really working hard on getting our hands all over our music man, just really focusing in on every single line, every vocal, every harmony and how we want to place everything. We’re just getting our hands dirty with our music more and more and just truly enjoying it. That’s where we’re at. We’re super excited to make another album. I can’t believe we’re even on album five, it’s pretty wild!

Since 2012 you guys have smashed pretty much every record going. Does that give you more creative freedom now to do whatever you want or does it put more pressure on you?

You know, that’s a good question. I feel like we try to not put pressure on ourselves and just do what we do best. We just try to evolve and try to make music that we love and relate to, and music that our fans connect with. It’s been great to break some records and do the things and do it at the level that we’re able to do that. Ultimately, we can’t take a whole lot of credit for that. It’s our fans that really push the FGL music and continue to create the opportunities for us that we have. We’re really just thankful and genuinely grateful for our fans and what they’ve done for us. In the meantime, we feel an obligation just to continue to create music that that they can have, they can live their life to and it can be the theme song of their life because it’s the way that we create our music for our life. It’s a good dynamic and a cool relationship and we’re just really thankful.

What I’ve always loved about you guys, is that you’re never afraid to do something out of the box and unexpected like you did with the Bebe Rexha collaboration. Earlier this year you remixed Justin Bieber’s song Yummy. What was it like to step into his world?

That was really cool. We’re always open-minded and ready to collaborate with artists that we look up to and respect. Justin Bieber is one of those guys that we love what he does, we love his music, we love what he stands for and we love that song. When we got pitched the idea we were all over it. We did that pretty quick and had a lot of fun with it. It feels like that’ll be something we’ll be showing our kids one day. Actually Liv my little girl, she’s two, is on the track so she’s already heard the song but maybe we’ll be showing our grandkids one day down the road. It was just really cool man and that was a huge opportunity and something that was a bucket list type of thing for BK and I being big fans of Bieber. We don’t like to put ourselves in any kind of box or limit the possibilities of what we can do. We just want to keep expanding, keep growing and keep getting better.

Last year you expanded your empire further with the launch of Round Here records, which is home to Canaan Smith and RaeLynn. What’s it been like running a label?

Man, this is a true building year for us but so far so good. I think we’re really enjoying it. We’re also going into it knowing that we don’t know everything and we’re trying to be open and work with our artists. Knowing how we work, we want them to be happy and we want them to help co-steer and lead the way because artists are creatives and creatives kind of run the universe, or at least in our world they do (laughs). It truly is fascinating to work alongside Canaan, RaeLynn and Blake Redferrin and to watch them grow and to watch them turn in songs. In life and in music anything that we do, it just seems to continue to get better and better and more fulfilling.

This extension of who we are and what we do having a label and publishing company, it really is fulfilling. Spending our time with amazing people, not only because they’re talented, but because their hearts are amazing and they’re just great people and they mean well. I think there truly is a family atmosphere and a family vibe in Tree Vibez and Round Here. Whenever we’re around the building and the studios, it’s just infectious. I think it’s life giving. It’s just nonstop creativity and so to be surrounded by that, it’s just amazing man. It just feels like another new chapter in our lives. I could talk about it all dang day.

It feels surreal because it feels like, in a weird way, we’re song farmers or artist farmers, or however you want to put it. We started planting these seeds in 2015 and we found a piece of property a year later. It took a year and a half to transform it into a studio and into a writers room, where it could be a legit business with meeting rooms and now a record label is being held out of there too. To build something, to spend time and to look back at what we’ve done and what we’ve put into it, it’s humbling. It’s taken an amazing team. We have a Leslie Dipiero, our general manager, who is an absolute boss badass female. She is 24/7 killing it for us and we’re so thankful to have her steering the ship when it comes to Tree Vibez. It’s just amazing man. I’m super thankful. Sorry about the long answer, but it’s just fun to talk about.

We’ve been starved of seeing FGL live in the UK for a number of years now. Once we get to the other side of this pandemic, will we be seeing you back in the UK?

Yes. Please tell everybody that your boys are coming back for sure. We don’t have an exact date yet but we were already talking about it and trying to figure it out, and then this coronavirus has put all of our plans on hold. Just know that we love you guys. We’re thinking about you guys and we’ll definitely be back really, really soon to throw a big ole party.

Florida Georgia Line’s new single I Love My Country is available to download and stream now. Listen to the track below: