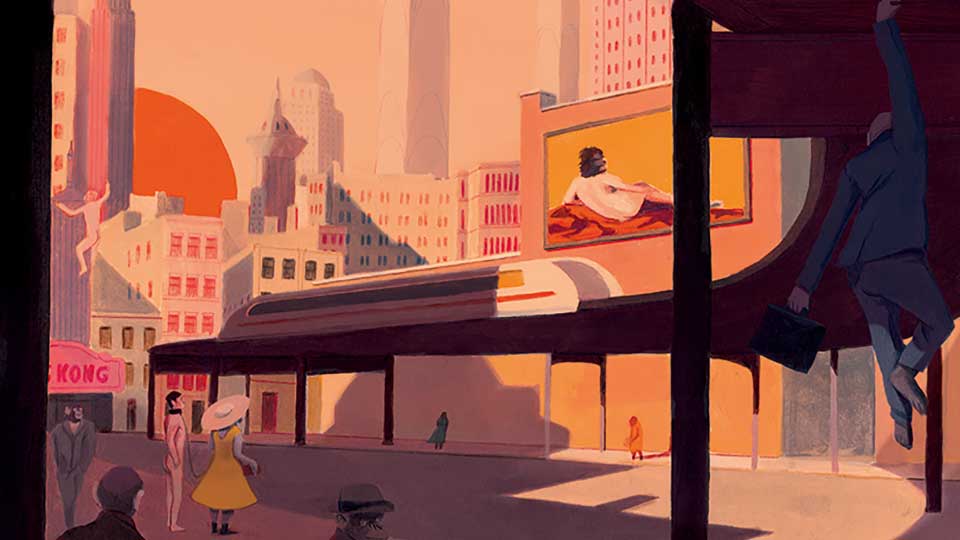 To confess my ignorance from the outset, before reading The Folio Society’s lavish new edition of Planet of the Apes, I had no idea that it had originated as a novel. It’s fitting that French author Pierre Boulle’s other most famous work, The Bridge on the River Kwai (which was of course based on a true story) also received a hugely-successful big screen adaptation. The original Planet of the Apes movie, starring Charlton Heston, wowed audiences in 1968, and its shocker of a twist ending became one of the most iconic and celebrated moments in cinema history. The concept spawned an entire franchise that was rebooted this century.

Is that what Pierre Boulle had in mind when he wrote Planet of the Apes? It’s possible. The original movie follows certain elements of the book’s plot quite closely. But reading the novel is a very different experience to seeing the film. They are both clever in their own rights, but the novel is, through the luxury of telling the story via words rather than images, more philosophical in its approach. There is a strange framing device that bookends the narrative. Until the closing pages, I was going to complain that it was superfluous – until its meaning becomes clear in the closing sentences! The desire to subvert the reader’s long-held expectations and make them rethink everything they’ve just experienced is an ingenious flourish that would survive translation, albeit in a different context, to the screen.

The main thrust of the action follows the exploits of journalist Ulysse Mérou, who in the Twenty-Sixth Century, accompanies Professor Antelle on an intergalactic voyage. After two years travelling close to the speed of light, they land on a planet not dissimilar to earth – Soror – which at first glance is almost like paradise. However, the humans are naked and dumb, and are the prey of the more intelligent, civilised and organised apes. After one of his crew-mates is killed by gorilla trophy hunters, Mérou is taken captive, along with Antelle. He is kept in a cell next to an attractive young woman he calls ‘Nova’, who cannot speak and lacks his intelligence. The research centre is staffed by chimpanzees, who are more rational and reasonable than the aggressive gorillas. Mérou realises that they are communicating with one another in a language he can’t yet understand, and he sets about learning how to communicate with his captors, honing his attentions on a sympathetic female chimpanzee called Zira. When she discovers that Mérou is, unlike the other humans, intelligent and rational, Zira becomes an ally. But how would civilised ape culture as a whole react to finding that they have a mere human in their midst who could almost be classed as their equal?

Planet of the Apes raises all kinds of fascinating and thought-provoking ethical dilemmas and philosophical ideas. It’s the kind of book that leaves your mind bursting with wonder. It is a truly beautiful example of what the best science-fiction can achieve – a total subversion of our worldview in order to present some uncomfortable questions and truths. In that sense, it’s way ahead of its time. In the 1960s, animal rights were much less at the forefront of people’s consciences, but titles such as this one will have had an advancing effect on the social conversation. The ‘inhumane’ treatment of Mérou does of course mirror the human behaviour of keeping apes in zoos, and the moral issue of animal experiments for medical research is also starkly raised by the book.

Boulle has thought through the world of his story with great care and attention: the gorillas are the aggressive custodians of law and order, the chimpanzees more rational and amenable, and the orang-utans are somewhat pompous and spiritual. The social layers are neatly woven into the plot. Because the created world is consistent, the story is credibly portrayed, meaning that the questions it raises hit their targets.

On the downside, the text is prose-heavy in parts, especially in the earlier chapters, before Mérou learns to speak to the apes. With no dialogue between characters, we’re left only with Mérou’s somewhat flowery descriptions of events. This is off-set by the use of short chapters and a simple vocabulary – Planet of the Apes is a book that a young teenager could devour if they’re a keen reader. It also doesn’t outstay its welcome, wrapping up in 172 pages.

One inconsistency with the text (which celebrated primatologist Frans de Waal’s introduction suggests may be a translation issue rather than the author’s error) is that the words ‘monkey’ and ‘ape’ are used interchangeably, whereas they are distinct groups – apes (which includes humans) only have residual tails. Given that Boulle’s work forces the reader to look the concept of anthropomorphism in such a challenging and meaningful light, it’s hardly a deal-breaker. But any new translator looking to have a shot at this title would do well to avoid the mistake.

Overall though, Planet of the Apes succeeds in its aims, which is to layer consciousness-raising ideas about the ethical treatment of animals, and to trash the human tendency to view itself as the pinnacle of evolution, within an exciting adventure story. The medium of science-fiction is perfectly exploited by Pierre Boulle to extract a profound but chilling concept that provokes lively debate and challenges readers’ preconceptions. If you enjoy classic and timeless science-fiction, then Planet of the Apes is a rewarding visit. It gives an original spin on humanity’s place in our own environment as well as in the cosmos.

This edition by the Folio Society benefits from stunning artwork and production values. David de las Heras’s cover art immediately captures the essence of Boulle’s work by depicting a gorilla in military uniform, ‘aping’ the great portraits of military heroes from the Napoleonic era. The striking image decorates front and back of the hard covers, providing front and rear views of the decorated gorilla. The illustrator’s seven full-colour internal paintings, some of them across two pages, are more stylised in execution, but provide visual representations of the key human and ape characters who dominate the book.

The Folio Society edition of Pierre Boulle’s Planet of the Apes, translated by Xan Fielding, introduced by Frans de Waal and illustrated by David de las Heras, is available exclusively from The Folio Society.