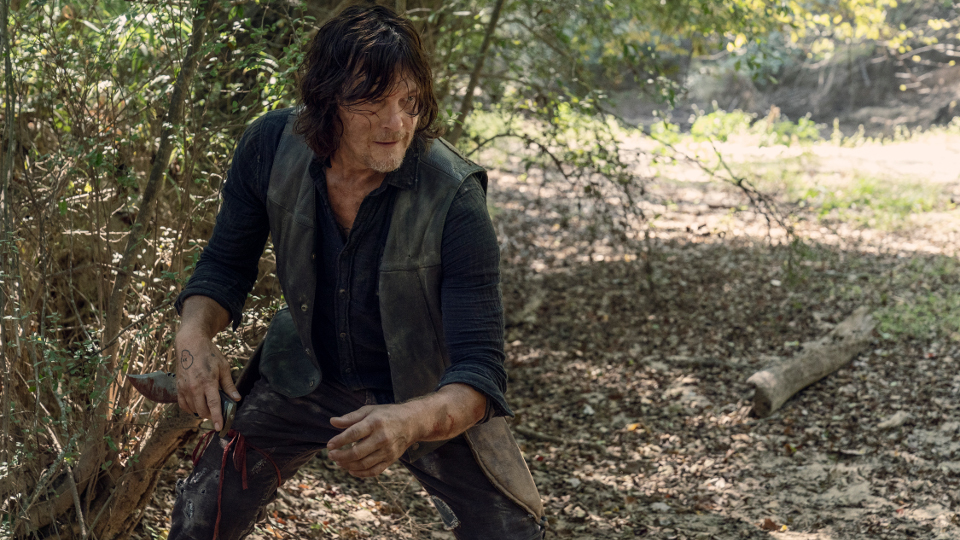 On the latest episode of The Walking Dead, Alexandria came under threat.

The episode opened up with Beta (Ryan Hurst) walking to an RV in an otherwise empty field. He was on a mission for Alpha (Samantha Morton) to find Gamma (Thora Birch) and bring her home for punishment. Inside the RV, two Whisperers were sat awaiting his arrival. As he entered they moved a seat and opened a trapdoor. Beta jumped down to a secret tunnel below.

Meanwhile, at Alexandria, Rosita (Christian Serratos) was still struggling with anxiety after Siddiq’s death and having nightmares that the Whisperers would come and kill her baby. Gamma arrived at Alexandria and found herself outnumbered. She explained that she was there to help and told of how Alpha had lured their friends to a cave where the horde was waiting. She didn’t know if their friends were alive or had escaped. Gabriel (Seth Gilliam) wasn’t sure to believe her and Rosita punched her out cold. They stashed her in the prison cell while they decided what to do.

Speaking to Gamma, they decided she wasn’t telling the full truth. She’d asked about the baby, who was her nephew. Eventually she admitted to killing her sister to please Alpha. She shed some tears as she explained and this convinced Gabriel she was finally telling the truth.

Meeting with the council, Gabriel went into a rage. He wanted to torture the Whisperers, taking their fingers and teeth. Gamma/Mary gave them details on the location of the cave and explained that Whisperers would be guarding the entrances. Before they left, they received a distress call from one of the radio towers saying another herd was on its way. Gabriel left with a group, leaving Rosita and Laura (Lindsley Register) behind with a skeleton crew to guard the gate.

The call was a diversion set by Beta so he could launch a stealth attack on Alexandria. After killing those at the tower, he gained entry to Alexandria through a tunnel and climbed to the surface via Dante’s grave. Once inside the walls he made his way between houses and killed the occupants. He then waited for them to turn before letting them outside.

While the few people on guard fought the newly created walkers, Beta gained access to where Gamma was being held and unlocked the cell door. He asked her to come to him and said Alpha wanted her back. She refused and said Alpha just wanted her in pain and defiantly said she was not afraid of Beta. Laura walked in and held a weapon to Beta’s throat while telling Gamma to get help. She ran outside to raise the alarm and Beta knocked Laura out.

Judith (Cailey Fleming) heard Gamma calling for help and let her inside her house. Beta came outside and went in after them. Inside was quiet so he crept around trying to find them. As he tried the last door, Judith fired a bullet from her father’s gun which knocked Beta to the floor. Judith and RJ (Anthony Azor) ran to safety but Beta wasn’t dead and he grabbed Gamma.

Rosita entered and overcame her anxiety to fight Beta. Gamma managed to put a stop to things by threatening to cut her own throat. Alpha wouldn’t have liked that so Beta left with her. As they walked away from Alexandria, Gabriel and his group jumped them and Beta ran way. Gamma told him what had happened and he believed her. After returning to Alexandria, Rosita left for Hilltop with Gamma and a few others.

Elsewhere in the episode, Daryl (Norman Reedus) was trying to gain access to the mine to see if Connie (Lauren Ridloff) and Magna (Nadia Hilker) had survived the collapse. He was picking off Whisperers until he found the entrance and saw Alpha leading walkers back outside.

He followed her to a creek and took out the other Whisperers before making a move on Alpha. He managed to injure her and she cut his head which bled into his eyes. It made it near impossible to see and he only just managed to fight off a group of walkers before turning back on Alpha. He had her pinned to the floor but she stabbed him through the thigh.

He managed to escape to a nearby gas station and Alpha tracked him by following his blood. The pair of them were both in a bad way. Daryl took shelter inside and looked for a weapon. Alpha sat in the doorway and banged her shotgun to attract nearby walkers. They attacked Daryl and he had another near miss and only survived by pulling the knife out of his leg to kill the last walker. Doing so caused him to lose a lot of blood and he began to lose consciousness.

Alpha also passed out after trying to get to Daryl. She awoke to find Lydia (Cassady McClincy) stood over her. Alpha was delirious and even passed Lydia a knife to kill her. Lydia couldn’t do it and left with Daryl. When Alpha awoke she found a message carved into a nearby surface that read: “Your way is not the only way.”

At the end of the episode, Alpha was found by some fellow Whisperers. She seemed to be thriving on the pain and declared she was “stronger than ever” and the “end of the world”.

Can’t wait for the next episode? Read our preview of The Walking Dead – 10×11 Morning Star.