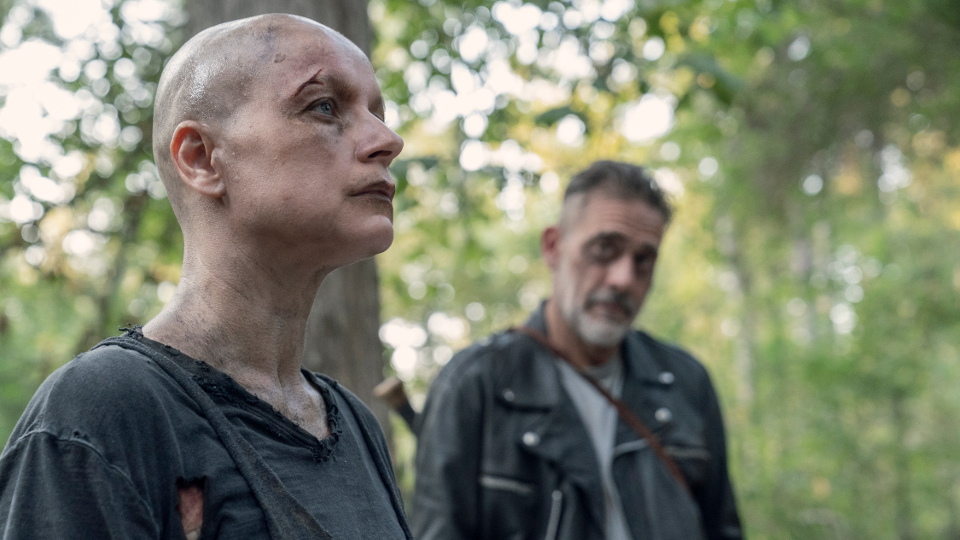 On the latest episode of The Walking Dead season 10, Beta (Ryan Hurst) went in search of Gamma (Thora Birch).

Gamma turned up to warn Alexandria that their friends were in danger. She told them how Alpha (Samantha Morton) had lured them into a trap – a cave filled with the horde. Gabriel (Seth Gilliam) and Rosita (Christian Serratos) felt she wasn’t telling the truth. Rosita knocked her out and they put her in Negan’s old cell.

Gamma told them she was helping because the baby Hilltop saved from the Whisperers was her nephew. She also confessed to killing her sister for Alpha. This was enough for Gabriel and Rosita to trust her. She told them the location of the cave.

Meanwhile, Beta created a diversion by attacking one of the radio towers. Gabriel led a group to help while Rosita stayed to guard the gate with a skeleton crew. Beta gained entry through a tunnel and began slaughtering the residents. After they turned to walkers he used them as a distraction to get to Gamma.

After more fighting she agreed to go with him to stop more people dying. They were found by Gabriel’s group and Beta fled. Gamma went back to Alexandria and then headed to Hilltop with Rosita.

Elsewhere in the episode, Daryl (Norman Reedus) tried to find a way back into the mine to see if Connie (Lauren Ridloff) and Magna (Nadia Hilker) survived. Instead he found Alpha and they fought. The hurt each other and Alpha plunged her knife into his leg.

Daryl retreated to a gas station but Alpha tracked him down. They both eventually passed out from their wounds but Lydia (Cassady McClincy) arrived. After talking to her mother, she saved Daryl and left with him. Alpha was eventually found by the Whisperers and she seemed keen to take the fight back to the survivors.

Watch the promo for The Walking Dead 10×11 below:

The next episode is called Morning Star. The Whisperers are coming for Hilltop. After Daryl and Lydia’s encounter with Alpha, the communities must decide whether to run or fight.

Tune in to AMC on Sunday 8th March at 9/8c in the US and FOX on Monday 9th March at 9pm in the UK to see the episode. Preview it with our gallery below: