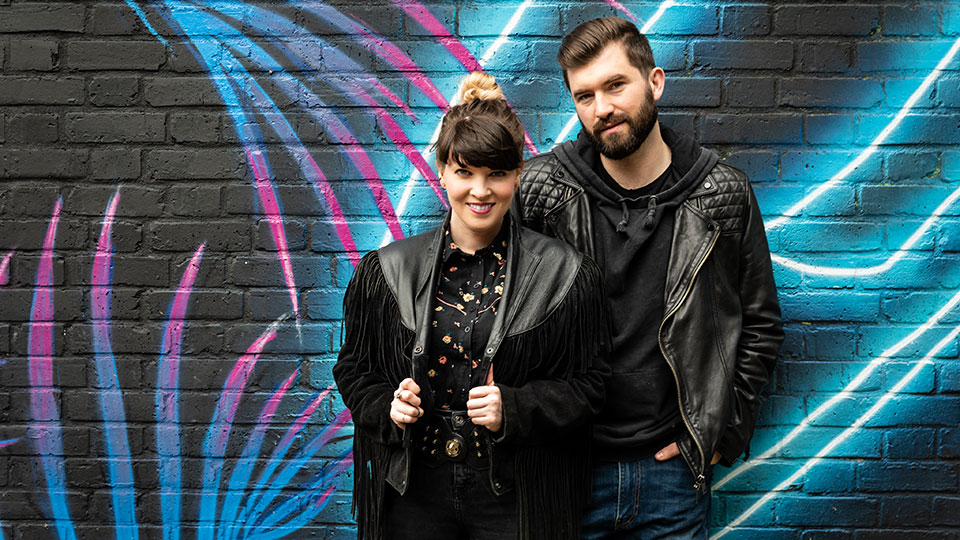 Since releasing their debut EP back in 2015, Lewis and Isi – AKA Two Ways Home – have become one of the most well-loved acts on the UK country scene. They’re also one of the most hardworking, playing at C2C: Country to Country, Country Music Week and the popular Buck N Bull club night, as well as running The Round Up songwriters’ nights and recently completing a 35-date UK tour with Caffe Nero. In 2019 they successfully crowdfunded their debut album, Break The Silence, which is due for release tomorrow, and last night we got a sneak peek of the record at an event at London’s TT Liquor cinema.

Putting an unusual spin on the typical album listening party, Lewis and Isi kicked off the evening by performing a selection of tracks from the album acoustically. Crowded round their vintage-style microphone, they performed songs including soulful, sunny recent single Out On The Road, the pop-influenced love song Speed Of Anything and album title track Break The Silence, which had an old-school country vibe. As usual their harmonies were on point throughout and they cracked jokes and bounced off each other in between songs.

The pair also brought fellow UK country duo O&O up on stage to join them on Broken Hearts Club, which balanced a lively melody with more downbeat lyrics and had a great bluesy riff on the bridge. All four of their voices blended together really nicely and they had great chemistry together – could a collaboration be on the cards some time in the future?

After a short break we were plunged into darkness to hear the ten-track album, which were introduced with snippets of the stories behind them. This was a really great way to get more insight into the record, with facts including that Out On The Road was the quickest song to write, the heartfelt, introspective Tattoo was inspired by a woman the band met in a Las Vegas diner and that the record really has been a global effort, being partially recorded in Isi’s home country of Austria and mixed over in Australia. We also got a short video of outtakes from the recording process at the end, including some of Lewis’ guitar solos and even a cameo from their cat!

One thing which particularly struck me about the album was how diverse it is. Two Ways Home have always been known for embracing a wide variety of musical styles and this record really reflects that. Whether it was the classic rock of Broken Hearts Club and Out On The Road, the jaunty 60s vibe of Out On The Road, the swaggering Prove Me Wrong or the distorted guitars and hard edge of Standing Still, it showed off their incredible range to great effect.

However, some of my favourite moments came on the softer, slower songs. The midtempo Conquer The World, with its anthemic chorus, was a lovely uplifting track about the importance of having someone to champion you and spur you on life, whilst album closer The Ocean had a lush, delicate feel and sweet vocals from Isi, ending the record on a hopeful note.

The evening ended with a Q&A with the band and country radio legend Baylen Leonard, which veered off into a number of tangents that kept the audience laughing throughout! Attendees submitted questions beforehand which gave us a further insight into the band and the record, including how they met, their musical influences, the process of writing and sequencing the album and their work on the Round Up. We also learned that Isi’s favourite song on the record is Break The Silence, whilst the first album Lewis ever bought was Shania Twain – make of that what you will…

Two Ways Home always bring their own unique style to everything they do, and this event was no exception. It was a great insight into an album that shows why they’re at the forefront of the UK country scene, as well as their talents as musicians and songwriters, and the sheer joy and love that has gone into this whole project. It’s an excellent body of work and they should be very proud of what they’ve achieved. Now here’s hoping we get to hear the whole thing live sometime soon…

Two Ways Home’s debut album, Break The Silence, is due for release on Friday 28th February 2020.