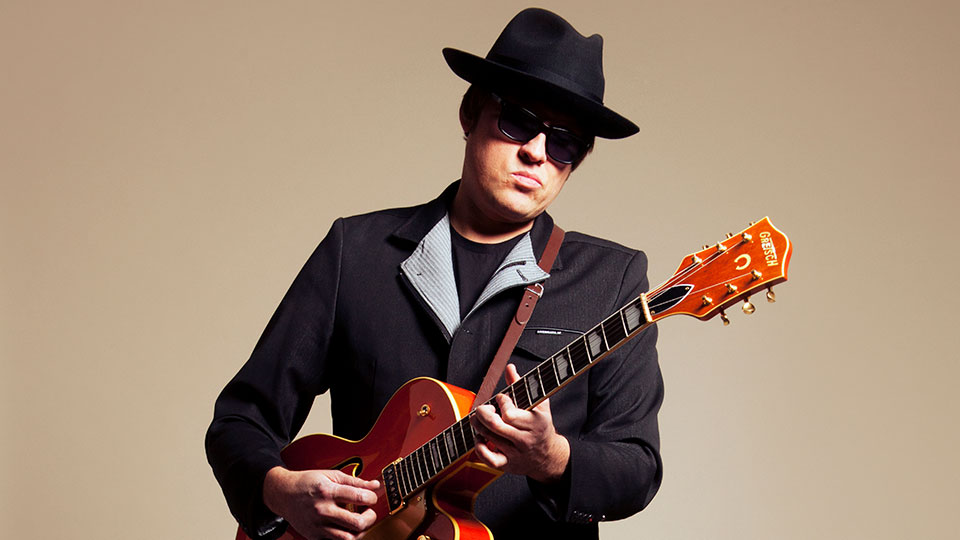 Liverpudlian singer-songwriter Robert Vincent is gearing up for the release of his new album In This Town You’re Owned on Friday (14th February).

The album is described as Robert’s most socially and politically poignant
to date and it’s produced by Brit Award winning Ethan Johns. In support of the record Robert will be hitting the road in March and April for some headline shows.

I caught up with Robert to talk about the record, discuss what it was like to work with Ethan Johns, and find out what he’d like people to take away from his new music.

Hi Robert. How are you today and where does this Q&A find you?

Hi, I’m very good thanks. I’m in Liverpool at the moment, in my kitchen.

You’re on the verge of releasing your new album In This Town You’re Owned. What can your fans expect from the record?

Yes, I’m very excited to be releasing this album. Fans can expect something that has a lot of warmth and a very live feeling as a record and the subject matter is fairly in keeping with the times. Because we just set up in the room and played the songs straight to tape it has a band vibe rather than a singer songwriter feel. The six of us; Adrian Gautrey, Anna Corcoran, Danny Williams, Robbie Taylor and Jim Kimberly just played the songs and they came out the way they did, it has captured something that up until this point I’ve never been able to do before. Ethan jumped in on most tracks in some capacity as well, which I was also really hoping he would do.

The record was produced by Ethan Johns. What did he bring to the table and how did you work together?

Working with Ethan is one of life’s great personal achievements for me, as I had always wanted to work with him. I had been a fan of his work for quite some time, firstly as a producer and then as a musician and I absolutely love the sound of the albums he produces. There is a real magic to what he does and being part of that process and seeing it happen first hand was a special thing for me, as i know it was for the band. Ethan was and is a very positive presence with his guidance in the studio, he is able to put people at ease quickly and get the best performance from them. Having been in studios a lot I can tell you it’s not always achievable, there is usually someone who upsets the apple cart. But not in this case, it was a very relaxed and enjoyable experience for all involved.

You’ve been previewing tracks from the record in the run-up to its release. Tell us a little about the songwriting and the inspiration for the album.

These songs really snuck up on me, and with all that has been going on in the world, I just felt hugely compelled to write them, to say something. I’m not trying to preach; it’s just how I see things. I suppose the inspiration of the album is that in the end we will get some of the issues we are faced with right. We will hopefully work things out, I don’t think it is a huge problem. The world is just a little divided at the moment. I’m trying to be positive about it, can you tell?

Probably The End Of The War, I wrote it as a lyrical idea, a bit of a poem and then I had that very simple guitar line separately and they just fell together one day. Also – the way it is recorded – we all had to play the song from start to finish for nine minutes and be ready to play the outro. The way it unfolds is real and unplanned. Ethan just suggested we did it before the take. It’s beautifully and instinctively played by the band, with the knowledge that with any mistake we would have to most probably start again. So that makes the recording all so much sweeter for me.

What would you like people to talk away from the album once they’ve listened to it?

I would like people to take away a feeling of empathy for the issues that are going on all around us, that they are not always our fault and we needn’t turn the frustration on each other. I think with a song like ‘This Town’ which is about the social divide that has happened in our world, is not just down to us. It has been made to make us feel like we have to have an issue with our neighbour, but we don’t have to. Now is the time we need to empathise with our neighbour, like an old town. The album ends with a song called ‘Cuckoo’ which is about forgiveness, so hopefully that will be the overriding message. Maybe I am overthinking it, but then I tend to do that.

With streaming gaining a tighter grip on music consumption, how do you feel about it and what opportunities does it present for you?

It opens up a new world of opportunity for the listener certainly, it makes it easier for us as musicians to promote our music and for people to access it. It is a huge tool for us to use as a way of promoting ourselves. I just think that the balance between plays and earnings could be better for artists who are struggling to make their art. That is the only issue I see. But I’m sure that will even out in the end. It is all good really and people are loving vinyl again, music consumption is always evolving.

You’re going to be on tour in March and April. What can fans expect from your live show and which songs are you looking forward to playing live?

We will be playing the new album, so I’m looking forward to that. The shows will be full band and again, that is my favourite thing right now. This band is such fun to play with, every gig is different as we try things out in the songs and some we won’t have played live before. It’ll be fun, I always like to have a laugh and engage with the crowd, the songs may have serious messages but I’m not a shoe gazer. I’m there for the connection to people.

If you could collaborate with any artist, who would you choose and why?

Roger Waters, I have always been a massive Pink Floyd fan and in a weird way I probably get the sense of honesty within songwriting from him more than anyone else. His recent album “Is This Life We Really Want’ is a brutal review on the world around us, but brilliant.

Also Neil Finn, the songs that guy writes are just some of the best around and he still continues to change in his approach to his craft. Most people would have given up at ‘Don’t Dream It’s Over’ fearing it would never get any better, but not Neil.

I would like to learn a language and write another album, but not in another language (I fear my limit may only ever be ordering beer or food). I’ve still tons of material! Touring would be nice, more of that and hopefully in the U.S. as well. I’m excited about the album, it is all about the journey that these little collections of music carve out for us, you never really know where it will take you. That is where the sense of excitement comes from with me, the unknown.

Robert Vincent releases new album In This Town You’re Owned via Thirty Tigers on 14th February 2020. Watch the video for Conundrum below: