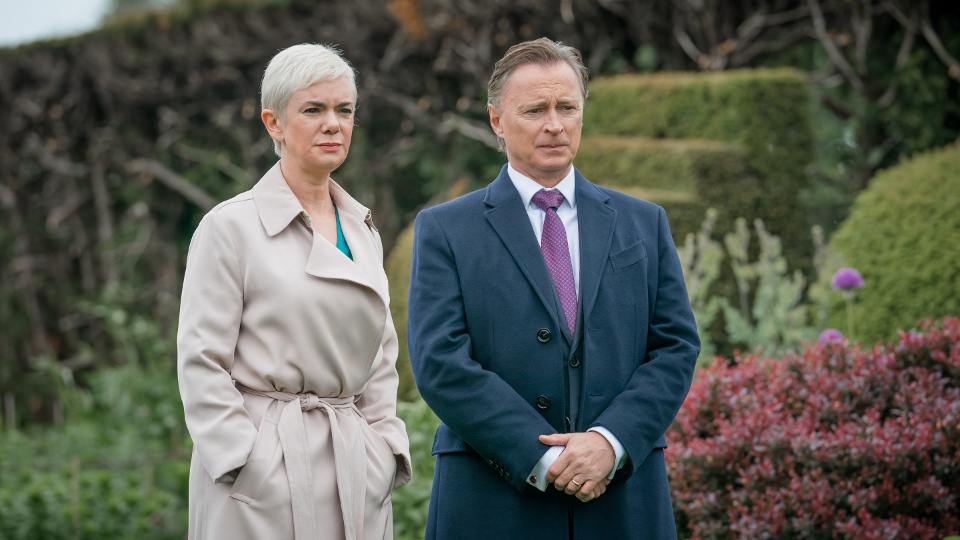 In the fourth episode of COBRA, support grew for People’s Justice and Scott Minnet (Charlie Carrick).

Sutherland (Robert Carlyle) held another COBRA meeting to discuss the hijacking of fuel tankers around the country. He also had a growing problem as reporter Manish Patel (Danny Ashok) was following Scott Minnet around and reporting his every move. It was giving Scott the air time he needed to spread his propaganda and increase his support. He invented a new three-fingered hand gesture that became known as the People’s Justice salute and it went national.

In the Red Zone, Scott and People’s Justice raided the Police command HQ and ousted Collier (Steve Cree). They took control of the fuel supplies. When news of events reached Sutherland he called on the military at Archie’s (David Haig) suggestion. Archie pushed for restraint knowing that Sutherland would probably go against his advice. Fortunately, Anna (Victoria Hamilton) realised it was a trick and warned Sutherland.

The new super transformer arrived in the UK and began its journey to the North East. However it was blocked which created another headache for Sutherland. He ended up giving a national briefing and inviting both Harry Rowntree (Con O’Neill) and Scott to Chequers to discuss a way forward.

Anna met with her husband Sam (Mark Bazeley) and confessed to sleeping with Edin (Alexandre Willaume). She decided to stay away from home while they sorted things out. She later spoke to MI5’s Eleanor James (Lisa Palfrey) about the situation.

Elsewhere in the episode, Ellie (Marisa Abela) decided to come clean about her involvement in the death of her friend. She released a video on the Internet to tell everyone that she supplied the drugs.

At the end of the episode, Scott gave a speech to his supporters and promised that the government’s time was up.

In episode 5, with the nation sliding further and further towards anarchy, Rachel faces difficult questions about Ellie.

Meanwhile, Fraser says goodbye to his father and grows closer to Francine. And as the influence of “People’s Justice” grows ever-powerful, Sutherland is forced to consider more extreme measures to retain control of the country.

COBRA continues Friday at 9pm on Sky One and NOW TV, all episodes are also available now on-demand. Preview episode 5 with our gallery below: