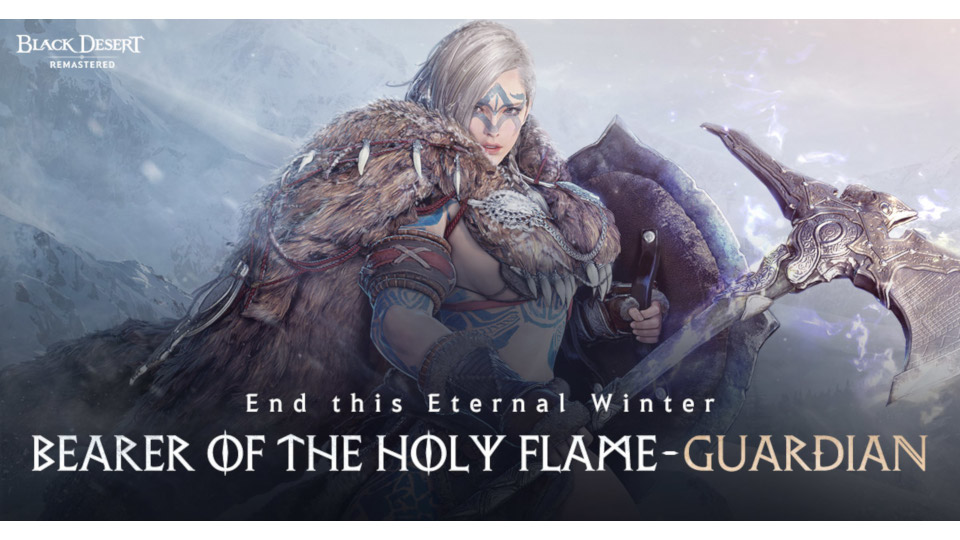 The wait is over people, the new Guardian class is now available in Black Desert Online. To celebrate the release there are various in-game events running which offer loads of exclusive rewards.

Adventurers can now begin their journeys with the new Guardian class. Hailing from the Mountain Of Endless Winter, this merciless warrior has arrived in the world of Black Desert, wrapped in the chill of an eternal freeze. After overcoming the turmoil created by her fragmented memories, she now seeks the legendary Ynix, a Holy Flame capable of immolating everything—even the gods themselves.

While playing as the new Guardian class, Adventurers can also participate in a number of in-game events. First, all EXP earned by Guardians until 5th February can be transferred to another class through the Character Transport System. During the same period, Adventurers who reach levels 15 through 56 can receive special rewards depending on the level reached. A Necklace of Eternal Winter and a Snow Crystal of Eternal Winter can also be obtained by those who hunt, gather, and fish. These items can be enhanced and exchanged for more exclusive items.

Further events are also running in celebration of the new Guardian class. Until 5th February, Adventurers participating in the Black Spirit’s training regime can obtain extra Combat EXP and Skill EXP, as well as a 50% discount on Books of Training at the Pearl Shop. In addition, Adventurers are highly encouraged to help Wacky Toshi with his research by collecting Marni’s Stones in designated areas. These stones can be exchanged for Toshi’s Seals, which can then be used to obtain other items based on the number of seals exchanged.

Black Desert Online is currently available to play on PC, Xbox One and PS4. For more information head over to the official website.