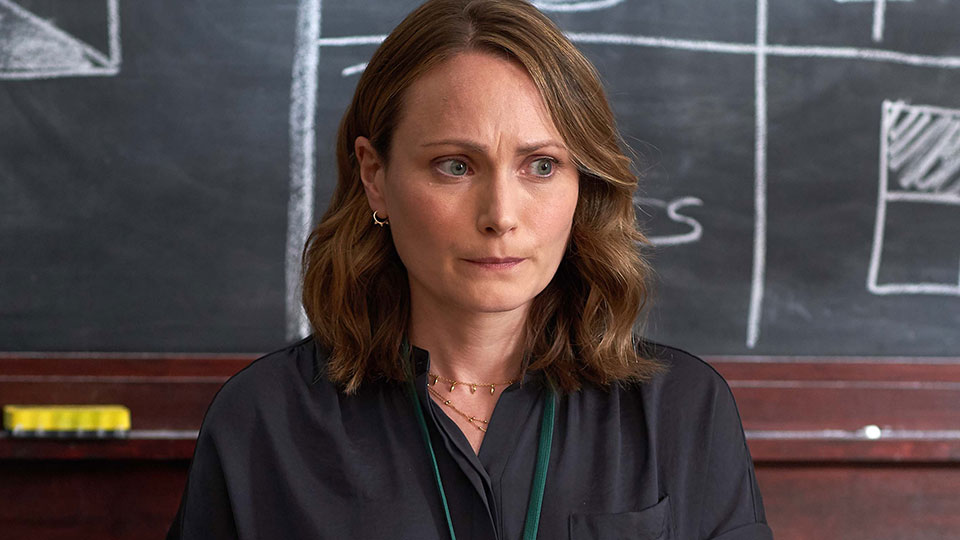 The mystery around the deaths intensified as Tom (David Tennant) was arrested on the latest episode of Deadwater Fell.

If you want to avoid spoilers for Deadwater Fell, stop reading now.

The next morning Tom handed Kate some pills, which she took while trying not to break down in tears. It became very clear that Kate felt uncomfortable in her husband’s company and she was distracted for the day, watching Jess in her classroom and attempting to hold things together.

At home that evening, Kate asked Tom why he’d slept with Jess and her Sacha (Seline Hizli) but he didn’t respond. Instead he told her that she had better ‘not be like this’ when his mother Carol (Maureen Beattie) came over. When Carol asked for more food, Tom told her to sit down and aggressively told Kate to get it for her. Carol looked uncomfortable as her son ordered his wife about.

In the present timeline Tom was in police custody being questioned by Darlington (Laurie Brett) and Collins (Gordon Brown). He was shown a video of his daughters on an iPad and told it was taken about 24 hours before the fire. Tom claimed not to remember taking it and Collins pointed out he looked emotional in the video. As he was further pressed, Tom tried to dismiss the video by saying he didn’t know his phone was on.

Darlington changed the line of questioning to the insulin he and his daughters had been injected with. Tom said Kate injected it into them and when asked why he didn’t fight back, he said the children were already dead so he had nothing to fight for. Collins asked where the insulin came from and Tom said it had been in his bag, which is how Kate got access.

Steve (Matthew McNulty) watched the interrogation and noted how relaxed Tom looked. He entered the room with Collins and the interview restarted. Steve pushed a map across the table to Tom and asked him to point out his house on it. Tom did so and then Steve asked him to identify the forest that the Kendrick’s house leads into. Steve then showed Tom pictures of one of his dead daughters and pointed out the pine needles on her feet.

Tom asked for the pictures to be put away and Steve revealed that they had a witness who saw him dragging Emily from the forest. Angry, Tom said it was Kate that followed Emily after they argued about a conversation he saw her having with Simon (Jamie Michie). Picking holes in Tom’s story, Steve asked when Kate would have had time to inject the children and pointed out that he found Tom in his bedroom, nowhere near the girls. Reluctantly Tom said that he walked away from the dead bodies of his children and when pressed if he was lying, he uttered ‘no comment’.

Tom was remanded in custody and processed following his interview with Steve and Collins. He then called Carol to give her the details of how to get in touch with him if she needed to.

Steve went for a drink with Darlington, who told him that was wasted in his current job. She asked him to think about moving up and he said he would, before hitting on her as she left. Darlington rebuffed his advances, leaving Steve alone in the pub.

The following morning, Steve went to see a counsellor who quizzed him about his anxiety. He denied being anxious but admitted he dealt with his feelings by walking the dog.

At the prison Tom tried to find out who took the statement from the witness and he lost his temper when his lawyer Nicky (Anneika Rose) said she wouldn’t be able to do that. He swore at her and she said she would see what she could find out.

Darlington asked Steve about his counselling and he told her it was a waste of time. They were interrupted when Nicky arrived at the station. Dylan (Lewis Gribben) was also at the station and acting nervous.

Carol went to the prison to see Tom and when she sat down she burst into tears. She apologised to him and Tom asked her to buy him some books. Carol tried to ignore him and asked how insulin had been injected into the girls. Tom pressed on asking Carol for help and told her she might have to remortgage the farm to help pay for his legal costs. He then asked her to speak people he already owed money for help.

It was then revealed that Steve had told Dylan to lie in his statement to frame Tom. Dylan pleaded to change his statement but Steve refused to let him, claiming his paranoid was coming from smoking too much weed.

Darlington rewatched the video of Dylan giving his statement and it looks like she wasn’t altogether convinced about what he’d said. Back in counselling, Steve admitted that he felt happy that Tom had been arrested for the murder of Kate and the girls.

Jess and Steve met Sandra (Lisa McGrillis) and Luke (Jack Greenlees) for drinks where Sandra revealed that she was four months pregnant. Knowing that Jess and Steve have been struggling to conceive, she admitted she’d been nervous to tell them the news. Steve watched Luke with his children and wasn’t happy that they liked him.

When they got home Steve had a go at Jess for telling Sandra about the IVF. When she complained that he hadn’t asked how she was feeling, he reacted angrily and they continued fighting as they got ready for bed. Jess asked what Steve wanted her to do but he gave her the silent treatment.

When they got into bed, Steve asked what having sex with Tom was like. He started to ask about the details and Jess refused to participate. Steve then climbed on top of Jess and started to initiate foreplay but she pushed him off and told him to stop. He then said he’d like her not to have slept with Tom before turning the light out.

Carol didn’t return to see Tom and she thought back to the incident that had played out earlier in the episode where Tom had been rude to Kate during dinner. She went to a local shop to draw out all of the money from her account and close it. Things jumped back to the past and Carol told Kate that Tom shouldn’t speak to her like he did. Kate cried and Carol continued washing up.

Carol posted the money through the door of the people Tom owed money to while Tom was shown waiting in the visitor’s room at prison crying.

Another flashback revealed that Steve attended the scene following the car crash involving Kate, Jess and the girls. His thoughts were interrupted by Darlington who asked him for a word. Dylan had been to see them to reveal the truth about his statement landing Steve in hot water, which was likely to result in Tom walking free. Collins suggested that Steve take a break from work while they investigate the case.

Darlington followed Steve out of the interrogation room and asked him if he had it in for Tom because of his fling with Jess. Steve said he just wanted the whole nightmare over and Darlington stormed off. He nipped to the bathroom and found himself locked in, which caused a panic attack. It didn’t take him long to get out and he went straight to confront Dylan, punching him to the ground.

He took some drugs off Dylan, which he took while drinking beer in the middle of the forest. Drunk and high, he went to the edge of the cliffs and another flashback saw Kate asking Steve to help her, claiming that Tom had been drugging her. Kate told Steve that Tom would kill her one day and he told her to get a grip.

As Steve looked close to jumping off the cliff, Carol was surprised when Tom turned up at her door.