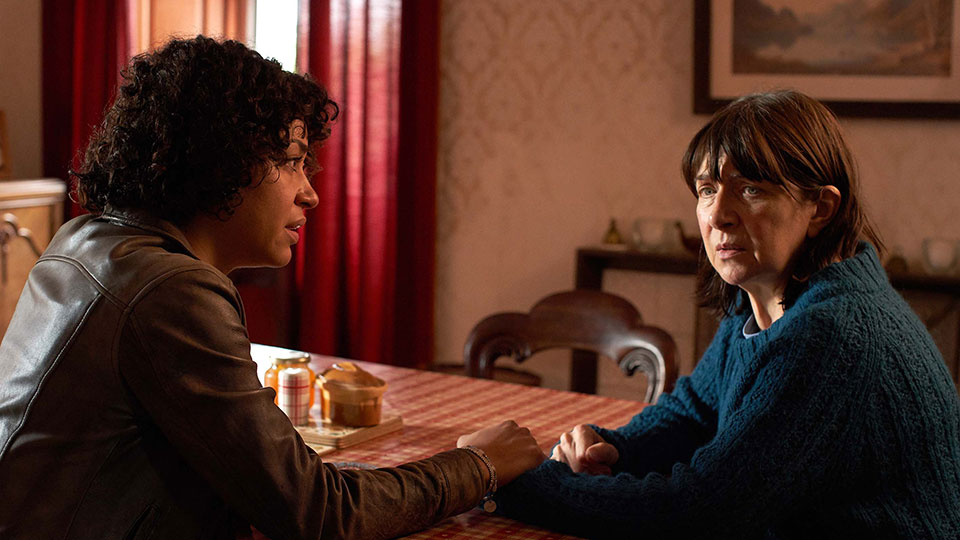 The final episode of Deadwater Fell aired tonight and the mystery has finally been unravelled.

As the episode opened, Jess (Cush Jumbo) was hanging out the washing when she had a period. She used a pregnancy test and discovered that the latest round of IVF hadn’t worked leaving her and Steve (Matthew McNulty) frustrated.

Tom (David Tennant) was informed by his lawyer that he had a court date for 8 weeks time and he grew angry when he was told that they couldn’t use Dylan’s (Lewis Gribben) false testimony in his favour. Tom insisted he wasn’t guilty and stormed out of the room.

Over breakfast Steve channelled his frustration at one of his kids when talk turned to how well Sandra’s (Lisa McGrillis) pregnancy was going.

Tom bumped into Lynn (Julie Miller) on the street and she couldn’t wait to get away from him, quickly making excuses. His next call was the police station where he reported to Taylor (Lorn Macdonald) about his bail.

After that encounter, Tom went to the memorial garden where one of Steve’s kids stared at him from the school playground. Jess intercepted the boy and moved him away. Jess returned home and told Steve that she saw Tom but he kept pushing her for more information. As they argued they broke the door of the bathroom down when one of the kids closed himself in and they found he’d made his arm bleed.

Jess told Steve that they needed to send the boy to counselling and they beat themselves up about not realising he was self-harming. Steve then revealed that Kate (Anna Madeley) had told him that Tom was making her take tablets and that she was scared of her husband. Steve broke down as he told Jess that Kate had asked for help and he’d dismissed her.

Over dinner Tom told Carol (Maureen Beattie) that he would pay for the gazebo in the memorial garden, which he’d been frosty about earlier. When Carol tried to discuss he finances, he left the table and told her to go with him.

They arrived at the school where there was a fete going on. Tom received a cold reception from the other parents and gravitated towards Lynn. Steve and Jess arrived, and Steve made a beeline for Tom telling him to stay away. He was restrained by the other parents and when Tom tried to donate money he was turned away.

Angrily Tom told the room that Steve had forced a witness to lie and shouted that they didn’t know anything about what had really happened. Steve stormed off outside and Jess followed. They had an explosive row outside where Jess couldn’t stop her anger and she blamed him for Kate’s death causing Steve to walk off.

Back at Carol’s Tom argued with his lawyer and told her that he needed a restraining order against Steve. She pointed out he’d broken his bail and she continued to point out how he was doing himself no favours, he fired her. A brief flashback suggested that Kate might have been having a fling with Simon (Jamie Michie).

Jess chatted to Sandra and asked if she wanted to go for a drink. Luke (Jack Greenlees) joined them and the conversation turned to whether the kids should move in with them while Steve sorted himself out. They also suggested that none of them knew what went on in Tom and Kate’s marriage.

Jess returned home and poured a glass of wine. Tom knocked on the door and she refused to open it. Persistent, he told her that he needed to speak to her about Kate and what happened at the end. Jess reluctantly let him in and he started to talk. He rambled and when pressed on what he wanted to tell her, Tom said that he should have died in the fire too before revealing that his father used to physically abuse him while his mum did nothing to stop it.

Tom theorised that he’d seen what Kate had done to the girls before he was knocked out and left in the upstairs bedroom. He was adamant that he could never have watched his girls suffer and then he left the house.

Jess called Steve but couldn’t get an answer. She tracked him down to the pub where she found him drunk. She tried to get him to leave and he broke down saying that he let everyone down. Back at home she ran him a bath and stayed with him before they cuddled up in bed to talk.

Steve asked again why she slept with Tom and she admitted that she felt lonely. When Steve said that he was there for her, she told him that she never knows what he’s thinking and the conversation turned to whether or not he wanted another child. He told her he wanted her to be happy and Jess reinforced that they both have to want it.

In response Steve said that Jess doesn’t always seem happy and she said that she felt like a babysitter, just there to ferry the boys around. Steve said he knew he hadn’t been good enough to her but promised to be better and suggested doing IVF again. Jess revealed that she was tired of feeling like a failure and said she wanted to stop IVF.

The next day Jess left Steve in bed and Tom went to the Post Office to try and get his hands on Carol’s pension. Jess turned up at Carol’s and asked why she was selling the house. Carol moved the conversation on to the gazebo before talking about Kate and the girls. Jess asked Carol why she thought the fire happened and quizzed her about Tom’s allegations that his father abused him.

Carol told Jess it was a lie and when they heard Tom coming back, Jess realised that Carol was afraid of her own son. Jess urged her to tell the police what she knew and when Tom walked into the room, Jess confronted him. As Tom tried to defend himself, Jess attacked him and Tom shouted for Carol to call the police.

Carol went to the police station with Jess to tell them what she knew. At the house Tom meticulously cleaned his hands and trimmed his fingernails. A flash back revealed that Tom had discovered that Kate had been planning to divorce him. The moment where we saw Tom looking despondent into a phone camera then played out when his daughter handed him a phone and asked him to film their show.

The next day he caught Kate in a lie so he called her asking her to pick up a padlock. We then saw him packing up a case of insulin at his office and then the events linked up to the opening scene of the first episode when the bike race arrived in town. That evening Kate gave Tom the padlock and he confronted her about Simon, accusing her of having an affair and planning to leave him.

Tom forced himself in Kate’s face as Emily walked into the kitchen. Emily ran out of the house and Kate followed her. Tom got the insulin out of his bag and shortly after Kate returned with Emily in her arms. She apologised to Tom and he took Emily up to bed and tucked the other girls in.

Kate went came up to the girls’ bedroom and she found them unresponsive while Tom sat there doing nothing. Kate flew into a panic and Tom injected her with insulin. He told Kate they deserved better than her. He dragged her body into the hall and then put a padlock on the bedroom door.

Returning to the kitchen and picked up Kate’s phone. He rang Carol and told her that he’d tried his best before hanging up. He then went to the bedroom where he injected himself with insulin after setting the house on fire. It looked like his plan was to kill himself and as the smoke engulfed the room, you could hear Jess screaming outside the house.

Tom woke up in hospital, where he panicked after realising he’d survived the fire.

Back in the present timeline, Tom had trimmed the skin on his fingers until he bled and was interrupted by the police who arrived to arrest him.

Jess and Steve took one of the children to see a counsellor where he opened up about Iris, Tom and Kate’s daughter, whose death had greatly affected him. A flashback to Kate and Jess smiling at each other, and the reveal of Kate finally getting a plaque and being buried with her children, brought the series to an end.

Deadwater Fell is available to stream on All 4.