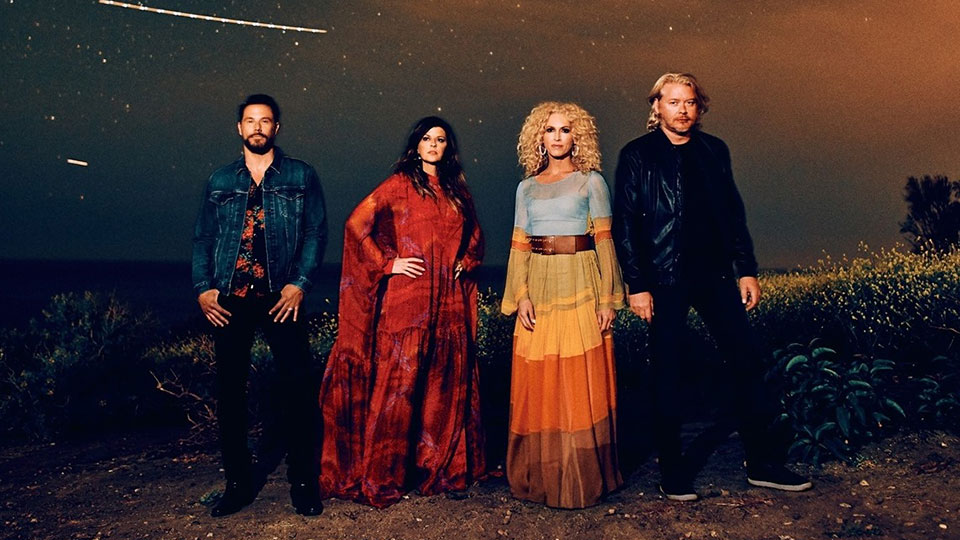 Little Big Town is one of the leading groups in Country music. They released their self-titled debut album in 2002 but it wasn’t until 2012 that they scored their first number one with Pontoon, from their fifth album Tornado. Since then they’ve charted plenty of hits including two more number ones with Girl Crush and Better Man. Their last album, The Breaker, was released in February 2017 and it became their third number one on the US Country albums chart. Almost two years on from that record and the quartet is back with their ninth studio album (if you count 2016’s Wanderlust), Nightfall.

As is the release strategy for albums these days, a number of tracks from Nightfall have been made available prior to the release. In this case four tracks, including the singles The Daughters and Over Drinking, have been released on streaming and download platforms. Neither of the singles has translated into a hit for the band yet but it adds further weight to the argument that acts with female lead vocals aren’t getting a fair shot at radio. You only have to listen to the lyrics of the Sean McConnell co-penned The Daughters to understand that the band have no time for the inequality that’s rife in the genre right now.

If you ever had any doubt that Little Big Town were this generation’s Fleetwood Mac, you need look no closer than Nightfall’s opening track Next to You. Stripped back instrumentation complements the foursome’s tight harmonies and it’s a disarming way to start the record. There’s no bombast here, no over-production and no attempt at a radio hit. This is Little Big Town pulling everything back so the spotlight is on their abilities as vocalists. Perhaps even more interesting is that the album is produced by Daniel Tashian and Ian Fitchuk, the producers that worked with Kacey Musgraves on her already classic album Golden Hour, and Little Big Town themselves.

Anyone expecting a record similar to Golden Hour will be surprised as Nightfall focuses on the vocals more than it does anything else. Little Big Town have always been exceptional vocalists with each of the four members able to take lead and their harmonies are the best in the industry. That’s not to say the album isn’t sonically interesting because there’s a lot to take in here, although it stays closer to ballad territory than any of their other releases. Title track Nightfall, co-written by band member Karen Fairchild, feels like a distant cousin of Fleetwood Mac’s Dreams with it pulsing beat and dreamy melody.

The album’s first standout moment comes on the Phillip Sweet led Forever And A Night, a big piano ballad co-written by three of the band and Foy Vance. The emotion in the song seeps through in every lyric and Sweet’s vocal is strong. Kimberly Schlapman gets a chance to shine on the bluesy backed Throw Your Love Away, showing off her softer vocal and drawing the soul out of it, and Jimi Westbrook leads the vulnerable misfit anthem Problem Child.

The only true uptempo song on the collection is Wine, Beer, Whiskey, another song the band co-wrote with Sean McConnell. An ode to the variety of alcohol on offer, the band takes a swampy groove with a little mariachi influence for a foot-stomping moment that will fit perfectly into their live set. Elsewhere on the record Karen Fairchild brings it home on the powerful Questions, which sees the lyrics taking the perspective of a woman who ponders what her ex may be doing, while the gorgeous River of Stars is a dreamy harmony-filled moment that sees Jimi and Karen trading verses.

Sugar Coat, a co-write from Lori McKenna, is the album’s finest moment. The song was available prior to the full album release and it has the biggest impact of the 13 songs included here. Karen takes lead again as she sings of hiding her true self from the world and putting on a front when her family is on the verge of crumbling. It’s the kind of heartfelt song that Little Big Town sells so well and it’s the track you’ll keep going back to on this record.

The album comes to a sedate finish with the restrained but beautiful Bluebird, and the acoustic-led ballad Trouble With Forever. Sticking very much with the theme of the rest of the album – paired down production and strong vocals – the tracks bring the album to a suitable close and gear you up to press the replay button and start the record again.

Nightfall is more of a continuation of The Breaker than it is a return to the more varied sound of Pain Killer. How much you like the album while very much depend on how you like your Little Big Town. If you’re after uptempo, party songs like Day Drinking then you may end up a little disappointed but if it’s lyrics with depth and gorgeous vocals then there’s plenty here to enjoy. I’ll admit this album wasn’t as instant as previous Little Big Town records for me but once you start to peel back the layers and really pay attention to the production and lyrics, you’ll find plenty to lose yourself in.

In this article:Little Big Town