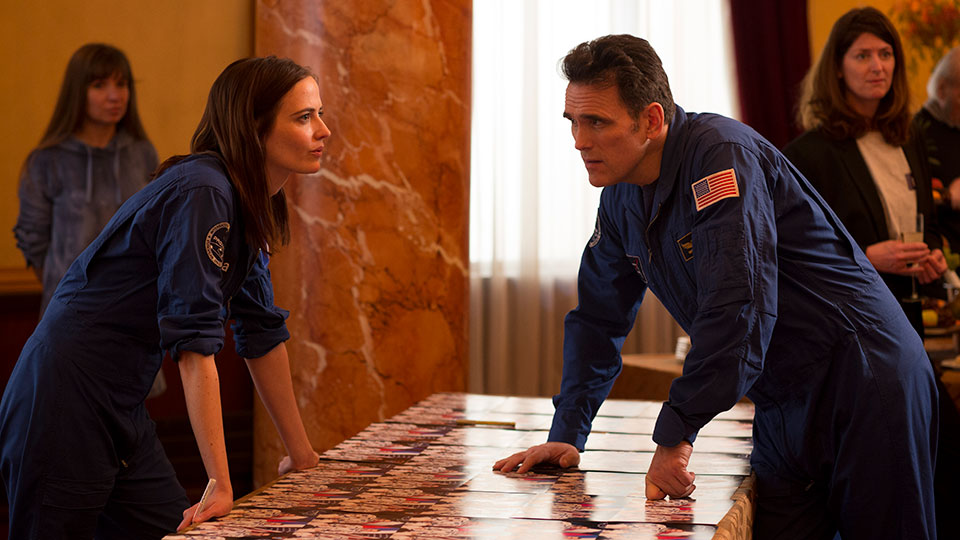 The drama stars Eva Green (Penny Dreadful) and Matt Dillon (Wayward Pines). It is a heartfelt portrait of a woman torn between professional ambition and the demands of motherhood.

Astronaut Sarah Loreau (Green) is undertaking the gruelling mental and physical training required for a one-year mission aboard the International Space Station. She is the only mother in a diverse international crew. Her colleagues, including American NASA veteran Mike (Matt Dillon), are focused on the job and seemingly untroubled by their family responsibilities.

Separated from her husband, Sarah tends to the needs of her sensitive seven-year-old daughter, Stella (Zelie Boulant-Lemesle), who is struggling with the long separation that lies ahead. The pressures intensify as Sarah finds herself facing some impossible choices. Meticulously observed, Proxima offers a tender portrait of a mother-daughter relationship against a backdrop of unimaginable scope.

“I am incredibly excited that Proxima will have its UK premiere at this year’s Glasgow Film Festival. It is a privilege to be the opening film for the Festival especially as it will be the first time in the festival’s history that the opening and closing films are directed by women.”

The festival will conclude with the UK premiere of the big screen version of Caitlin Moran’s How to Build a Girl.

Beanie Feldstein (Booksmart) shines as Johanna Morrigan, a 16-year-old extrovert from the outskirts of Wolverhampton with raging hormones, an unstoppable imagination and gigantic dreams. Her bedroom is adorned with posters of her heroes such as Jo March, Cleopatra, Sylvia Plath and others, who come to life and provide the closest thing to friendship that she has. Yearning to make a name for herself, she answers an ad seeking “hip young gunslinger” journalists for a cool London music magazine. She is accepted, reinvents herself as Queen of Mean rock critic Dolly Wilde and heads to the big city.

But as her critical savagery brings her greater and greater success, the lines between Johanna Morrigan and Dolly Wilde begin to haze. She has certainly figured out how to build a girl but is this the girl that she wanted to be?

Caitlin Moran, writer of How to Build a Girl, said:

“It is the greatest thrill of my life to finally unleash Beanie Feldstein as the noble, swashbuckling Sex Pirate Johanna Morrigan at the Glasgow Film Festival – and to have the honour of closing this joyous cinematic explosion means the whole audience can come straight to the nearest pub with me, and celebrate the hotness of Alfie Allen as John Kite. Unless Glasgow’s gone off that kind of thing since last time I was there. Which I doubt.”

“We are delighted to be opening and closing the 2020 Glasgow Film Festival with work from hugely talented female directors. What better way to start that celebration than opening the Festival with the UK premiere of Proxima, the latest film from writer/director Alice Winocour. Produced by Isabelle Madelaine and Emilie Tisné, it features a career-best performance from Eva Green as an astronaut undertaking the gruelling preparations for a year-long mission aboard the International Space Station. The growing tensions between her professional ambitions and personal responsibilities will strike an emotional chord with every parent.”

“This year we close the festival on International Women’s Day and we are delighted to host the UK Premiere of How To Build A Girl, based on Caitlin Moran’s cherished, semi-autobiographical bestseller. The film is a hilarious and moving tale of Wolverhampton teenager, Johanna, brilliantly played by Beanie Feldstein, making her way in the world. Along the way she takes life lessons from her heroes, Sigmund Freud, Sylvia Plath, Julie Andrews and David Bowie, to try to navigate the unfairness of the world. I loved every minute of it.”

Tickets for Opening and Closing Galas go on sale at 12 noon on Monday 13th January from glasgowfilm.org/festival and GFT Box Office (0141 332 6535).

The full programme for Glasgow Film Festival 2020 will be announced on 29th January 2020.

In this article:Glasgow Film Festival, Proxima