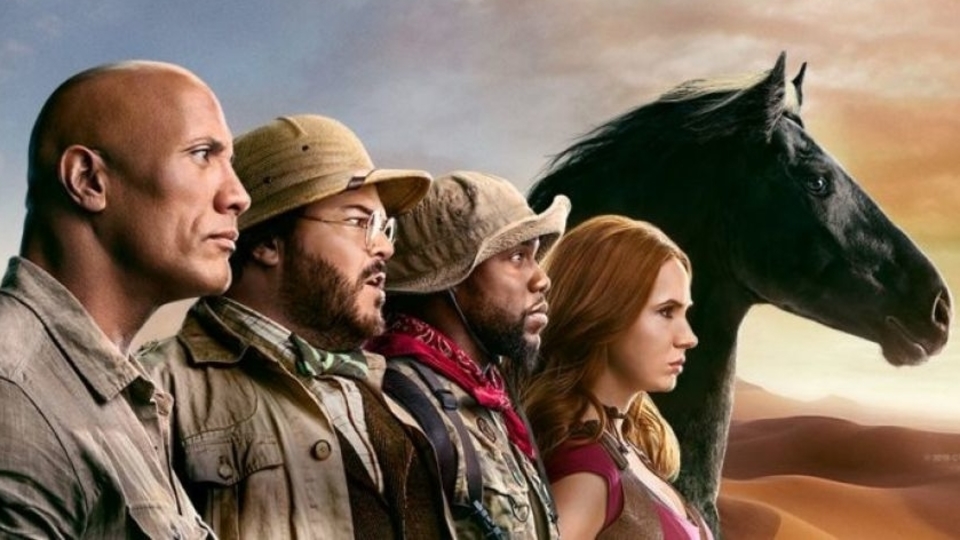 An unlikely new franchise was spawned after the massive global success of Jumanji: Welcome to the Jungle in 2017, which pulled in almost a billion dollars at the worldwide box-office. Not a bad return for a film costing (only) $90million. Director Jake Kasdan returns for this sequel and we are told that the stakes have never been higher as our heroes reach ‘The Next Level’.

For the most part, Jumanji: The Next Level does the basics right, it adds in some great new characters and the fun-factor has meticulously been preserved from the last film. But with all that said and done, I was still expecting more. It seems content with just playing to the same beats as Welcome to the Jungle without really being ambitious enough to take things onto the next level. It’s fine for the most part but a little more guile could have created a far more exciting addition to the series.

Some time has passed since our heroes have returned from the game. Bethany (Madison Iseman), Martha (Morgan Turner) and Fridge (Ser’Darius Blain) are enjoying life and making a go of things but Spencer (Alex Wolff) is having difficulty adjusting to college life in New York. When Spencer doesn’t show up for a reunion, the gang go to his house to look for him. His grandfather Eddie (Danny DeVito) and his former work-partner Milo (Danny Glover) are there ironing out their differences after years of estrangement. But neither of them have seen Spencer either.

Before long, the gang realise that Spencer has gone back into the Jumanji game. Reluctantly they go back in to get him out, but unwittingly Eddie and Milo also get sucked up into the game, which has been glitching and throwing up a few new surprises. Enter Dr Smoulder Bravestone (Dwayne Johnson), Ruby Roundhouse (Karen Gillan), Professor Shelley Oberon (Jack Black) and Franklin Finbar (Kevin Hart) – all ready to play the game again, but this time their personalities may not be as expected.

Without doubt, the casting is what makes Jumanji: The Next Level work so well. The ensemble is fantastic (perhaps only bettered by Knives Out this year), with each and every one of them delivering a memorable turn. This time around the game glitches mean that some play multiple versions of the characters so this conjures up a very nice dynamic where the actors really get a chance to have some fun with the roles.

Karen Gillan, Dwayne Johnson, Kevin Hart and Jack Black are as awesome as you would expect, and have fun playing multiple versions of themselves, which is a tough ask. Colin Hanks and Nick Jonas lend solid support too, and the new additions of Danny DeVito, Danny Glover and Awkwafina are sublime. They are all so funny and help push the film uphill at times when the narrative gets a little flat.

For a game-based film, the levels they have to get past should have been a little bolder in concept and that’s the first sticking point of Jumanji: The Next Level. The second is Rory McCann (Game of Thrones favourite The Hound) playing the film’s villain Jurgen the Brutal. At no fault of the actor, the character just doesn’t have much to do and isn’t given a chance to shine like Bobby Cannavale did in the last film. I also think the younger cast (Iseman, Turner, Blain and Wolff) are really underused here which is a massive shame.

I absolutely love IMAX and what it brings to a movie. The immersive sound and crystal clear picture adds layers of entertainment and enjoyment to any film in the format, and thankfully Jumanji: The Next Level benefits from this upscale. The success of a film like this lies with the immersive feeling you get during its big action moments, and Jumanji: The Next Level isn’t short on spectacle. The IMAX effect really places you into the heart of the action.

The scenery and the colourful landscapes all pop onscreen but it’s the depth of the IMAX 3D that really brings about the wow factor. There’s a fantastic sequence where our heroes have to traverse a moving maze of rope bridges high in the mountainous clouds. Throw in some angry monkeys and you have a brilliantly immersive sequence that’s so much fun to watch. If you can afford the upscale in price, IMAX does add something special to the movie-going experience.

Jumanji: The Next Level is a fun family adventure with lots of laughs and some great action set-pieces. It doesn’t outdo its predecessor which is a shame, but there’s enough here to guarantee a great afternoon out at the cinema this holiday season. The great ensemble work hard to deliver the fun and with a brilliant mid-credits sequence hinting at a potential third film with a very cool angle, it seems that we are set for even more Jumanji fun in the coming years.