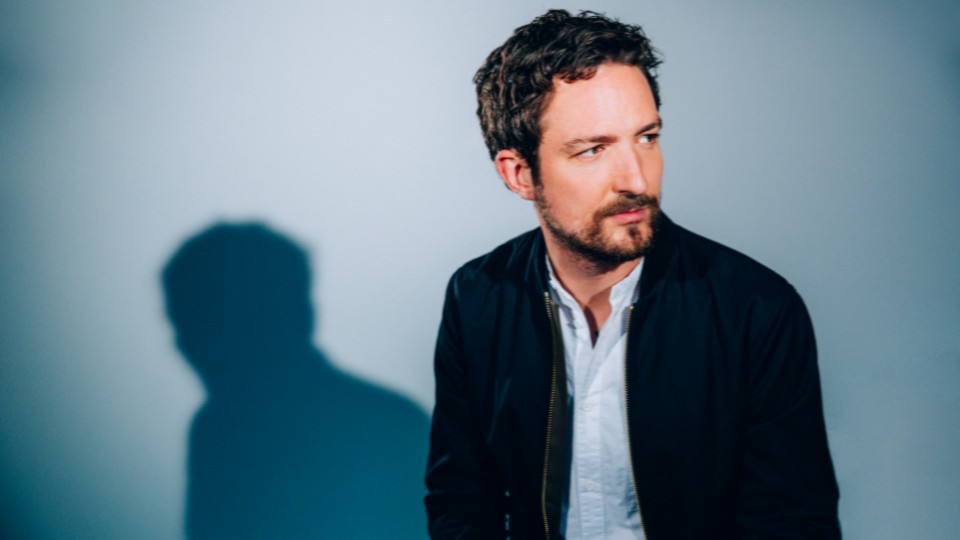 Since embarking on a solo career back in 2005, Frank Turner has been carving out his own distinct path as a singer-songwriter, with a sound combining folk, pop and punk influences and songs covering everything from drinking and rock and roll to atheism and sexism. His latest album, No Man’s Land, was released earlier this year and tells the stories of forgotten women from history. Now he’s out on the road with his band The Sleeping Souls in support of the record, and finished the UK leg last night with a sold-out show at London’s Alexandra Palace.

Taking place in the recently restored Victorian theatre, Turner’s show was split into two parts: an opening solo section of songs from No Man’s Land, followed by a full set with his band the Sleeping Souls. Arriving on stage to huge cheers, Turner kicked off the first half of the show with Jinny Bingham’s Ghost, the opening track on his latest album. It’s a fiery, rattling number crammed full of storytelling and details – one of the trademarks of his style – and his vocals were incredibly powerful as he belted the song out. He followed that with The Graveyard Of The Outcast Dead, which balanced a rollicking barroom melody with melancholy lyrics before building to the bridge, where he showed off the raw edge to his voice.

Throughout the No Man’s Land section one thing which particularly stood out was the range of musical styles Turner uses to tell each woman’s story. Whether it was the jazzy, layered Nica, the a capella intro and closing to The Hymn Of Kassiani or the lively The Death Of Dora Hand with its impressive guitar solo (which drew whoops and hollers from the crowd), it felt like he really captured the energy of each individual. I also really loved his songwriting and how he weaves in all the different aspects of each woman’s life, as well as snippets like the reference to Ozymandias in the anthemic The Lioness; it’s clever but without being smug about it. He had great chat with the audience from the off too, cracking self-deprecating jokes and speaking particularly passionate about the legacy of Sister Rosetta Tharpe before performing his song about her, Sister Rosetta, which he encouraged the crowd to clap along to.

After a short break, Turner returned to the stage with his four-piece band The Sleeping Souls, and welcomed the audience to show 2,433. They opened the set with the rock-influenced The Ballad Of Me And My Friends, which had a nostalgic, wistful feel about it and had the crowd singing along in full voice from the off, before picking up the tempo with I Knew Prufrock Before I Got Famous. Throughout the show Turner told the audience the story of how his career and life arrived at their current point, promising to play ‘old songs, new songs and everything in between’. It gave the whole thing an old-school vaudeville feel, enhanced by the atmosphere of the Alexandra Palace Theatre.

As with his solo acoustic set, Turner’s range of musical styles with his band ran the gamut from twangy folk on songs like Journey Of The Magi, to classic country sounds on the sunny The Opening Act Of Spring and performing an ‘old song in a new style’ with a rock and roll take on Reasons Not To Be An Idiot (which also featured a reggae break midway through!). I was also impressed by the staging throughout, including the stark lighting throwing Turner into silhouette on the pulsing, powerful I Am Disappeared, and his musicianship – not only his excellent guitar playing throughout, but his piano playing on the heartfelt, romantic There She Is.

However, what brought the whole thing together was the sheer amount of details in Turner’s lyrics – whether that was references to snowy walks listening to Bruce Springsteen on Redemption, or the characters he creates such as the recurring Amy (who particularly featured in a trilogy of songs that included the growly, oddly celebratory Tell Tale Signs) and the titular Balthazar, Impresario, who you really felt coming to life through every line. I also thought he had a really engaging stage presence and good banter with the audience. At times he was brutally frank (pardon the pun) as he talked about issues such as mental health, addiction and death, but always with an injection of humour that meant things stayed on the right side of serious, and his vocal performance was full of conviction, particularly on the visceral One Foot Before The Other which had a dark edge to its upbeat melody and hitting some huge notes whilst playing rapid-fire guitar on Love Forty Down.

Turner closed the show with the stomping Recovery, encouraging the crowd to get up on their feet and sing and clap along (not that they needed much persuasion). The song gave him an opportunity to show both his ability to quickly deliver lyrics as well as the depth in his voice. He followed that with I Still Believe, which featured a wicked harmonica solo, and Be More Kind. It was an incredibly moving, uplifting way to end the set and based on the enormous cheers I think it’s safe to say the whole audience left feeling on a high.

Overall Frank Turner showed why he’s become one of the most well-regarded singer-songwriters of his generation and just why he inspires so much loyalty in his fans. With intelligent songwriting, passionate performance and an engaging stage presence, he’s established a distinctive position for himself in the UK music scene and is a very rare talent indeed. I’m already excited for his run of acoustic shows next spring – if you get the chance to see him live then grab it with both hands, because you’re in for an absolutely incredible evening.

See Frank Turner live on tour in the UK in March 2020: