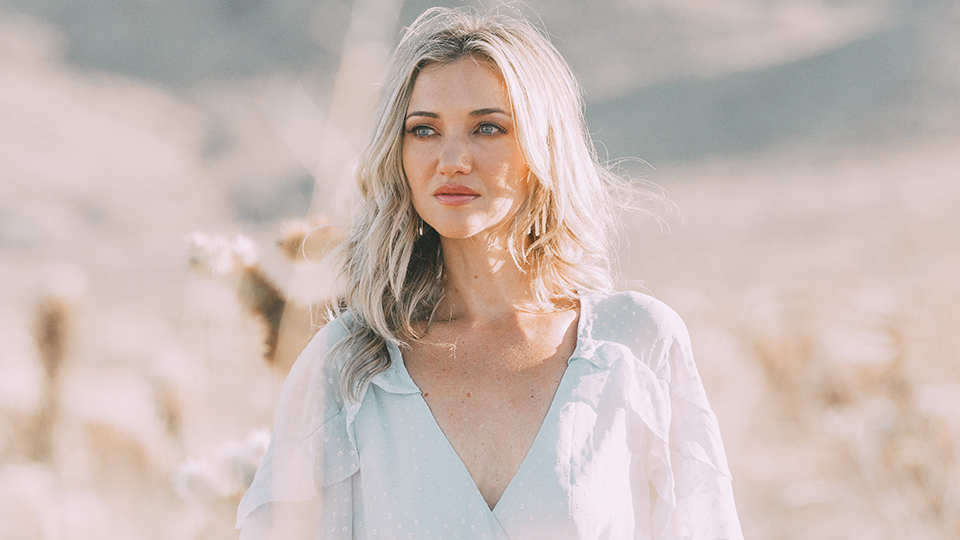 Originally from Iowa, singer-songwriter Sarah Darling has been winning over country music fans here in the UK since she released her breakout single, Home To Me, back in 2011. Since then she’s performed with Brad Paisley on the Grand Ole Opry, appeared at C2C: Country to Country four years in a row, and released three critically acclaimed albums on her Be Darling label – most recently Wonderland, which topped the UK country charts this summer. Her 2017 Christmas record, Winter Wonderland, has rapidly become a favourite and now she’s back with her latest London Christmas show, which took place last night at Union Chapel.

The set was split into two parts, with the first introduced by Shiona McCallum before Darling arrived on stage with her three-piece band to a very enthusiastic crowd response. She kicked off the show with Call Me, from her latest album Wonderland. It’s an upbeat, poppy tune which showed off the smooth quality and tone in her voice as well as quick delivery on the verses. Right from the off she gave a very animated performance, moving around the stage, jamming with her band and waving her arms as she sang, which made her incredibly engaging to watch. She followed that with the dreamy Where Cowboys Ride, which was packed full of detailed imagery and her sweet vocals filled the huge space effortlessly.

Across the next two and a half hours, Darling took us on a whistlestop tour through her career to date, mixing songs from her past three albums with a few Christmas songs, including a jazzy rendition of Santa Baby that showed her sultry side, a melancholy spin on Have Yourself A Merry Little Christmas and a duet with songwriter Jessica Sharman on Winter Wonderland, where she encouraged the audience to join in. She also performed her recently released cover of The Wreckers’ Leave The Pieces, which she recorded for her current Campfire Sessions project, telling the crowd ‘we’re going country right now’. The fiddle-led number gave Darling a chance to show off her sassy side – something we don’t often get to see – and she went for it on the big notes, which got a warm response from the audience.

Throughout the show Darling also brought out an array of special guests, including Jamie Lawson – who performed his hit I Wasn’t Expecting That and a slowed-down, subdued version of Hallelujah with a huge note at the end – and The Wandering Hearts, who sang their own track Burning Bridges before joining her for a bluesy take on The Christmas Song. I liked that she gave her guests the opportunity to show off their own music as well as performing alongside her, adding to the old school variety show of the whole thing.

For the second half of the performance, introduced by Matt Spracklen, Darling was joined by Ward Thomas and Sharman to sing their current single Divide. The track has a great classic country feel about it and I loved the harmonies between the quartet (a British answer to the Highwomen perhaps?). Lizzie and Catherine also joined Sarah for a lilting, gentle riff on Joni Mitchell’s River and the Dixie Chicks’ version of Landslide. It’s clear the three of them have great chemistry and I’d like to see them perform together again in the future.

However, Darling was clearly the lynchpin of the whole thing, and she fulfilled her hosting role like a pro. One thing which particularly struck me was how at ease she seemed on stage. When I’ve seen her live previously her chat with the audience hasn’t been her strongest point, but last night she was cracking wry jokes and telling stories about her approach to songwriting and the concept for the show. She came across as incredibly warm and likeable and it was lovely to see that side of her personality.

That said, one of Darling’s strengths has always been her vocals, and they were particularly on show last night. Whether she was performing pop-influenced tracks like the uptempo, summery Blue Sky and Shine, with its pulsing beat and 80s keyboards, or more traditional country numbers such as the atmospheric Fire and the heartfelt, regret-tinged Talk About The Weather, her clear, angelic tones rang out through Union Chapel and had a lovely old school feel, as well as being full of emotion.

Darling closed the main portion of her set with the romantic, 60s-sounding London Fog before performing Silent Night. The song had a soft, lullaby-like feel to it and showed off her vocals to perfection, particularly in the closing a capella section where the audience fell absolutely spellbound. She received a standing ovation and it showed just why UK audiences have taken her to their hearts.

For her encore, Darling sang Montmartre, her love letter to Paris, which was full of lush imagery and featured a gorgeous string section, then ended with the uplifting Halley’s Comet. Her vocals glid beautifully over the song’s delicate melody and she encouraged the audience to join in on the chorus (not that they needed it!), and they responded with thunderous applause and cheers as the song came to a close.

Overall Sarah Darling delivered a confident, assured performance which showed off her gorgeous vocals as well as the blend of country and pop in her sound, as well as striking a balance between guest stars and her original music and highlighting the progress she’s made with her stage presence. She’s promised to come back to the UK and personally I’m looking forward to seeing her take the next step and where she can go from here.