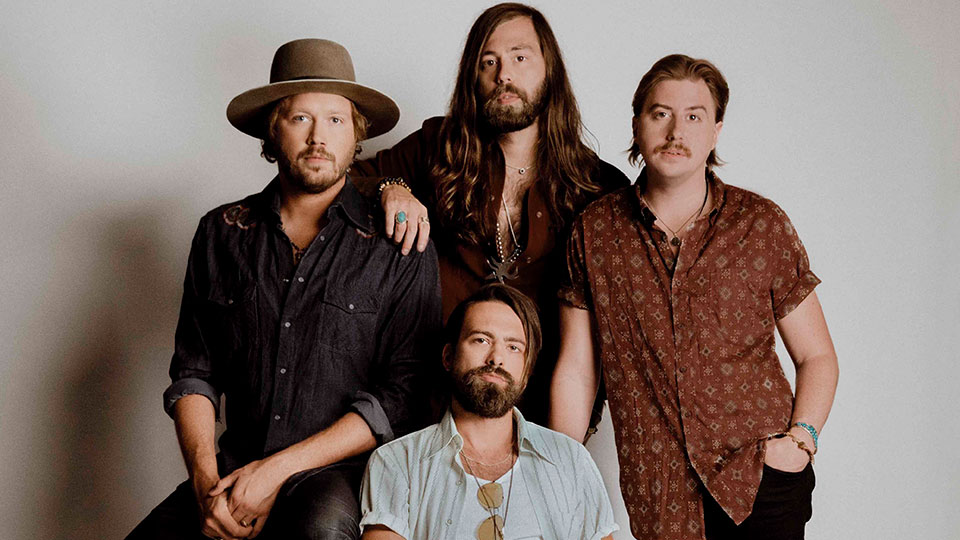 A Thousand Horses made their long-awaited return to the UK last week for a show at 229 Club in London.

The headline show was upgraded from the smaller room in the venue to the larger one due to fan demand, and the band used it as an opportunity to showcase songs from their upcoming new album as well as fan favourites.

Before the show I sat down with the band – Zach Brown, Michael Hobby, Graham DeLoach and Bill Satcher – to talk about making it back to the UK, their plans to return in 2020 and their new album.

Guys, welcome back to the UK. It’s been a while hasn’t it?

Michael: It feels great to be back. We’ve been itching to get back here for three years. We love playing over here in the UK, in London. We’re pumped and we’ll be bringing the party tonight.

You’ve been dropping some new tracks this year – My Time’s Comin’ and Livin’ My Best Life – from the new album. Would you say they represent what fan can expect from the full record?

Michael: Yeah, I think so. Those two songs represent the country rock side of us, and what we do. It’s a good taste of what’s to come. There’s a few more rockers in there. We can’t wait for everybody to hear the record. We’re so proud of it and loved making it. We feel like it’s our best yet.

Livin; My Best Life is such a great track. It’s quite infectious and memorable. What kind of reaction have you been getting from the fans since that’s been out?

Zach: It’s been great, man. We started playing that song before we put it out. That’s the real test if no one’s ever heard a song and you go and play it live. We were playing it live for a couple months before we put it out. It’s definitely the kind of song that by the end of it, people are gonna get in the vibe and sing back some of the words and the ‘woah, woahs’. It’s been a good response.

On the new album you’ve worked with Dave Cobb again. What does Dave bring to the table?

Zach: Dave has been a huge part of our creative process from the very beginning. He’s from Georgia, we’re all from Georgia, South Carolina originally so we have a lot in common in the kind of music that we all grew up listening to and the kind of style that we like. We just vibe with him. We have our process. We know what to expect and he knows what to expect from us.

Graham: It’s just really magical. He kind of morphs into the fifth band member. He’ll get in there and play some acoustic guitar with us. We do everything right there on the tracking floor and he’ll be like, ‘that’s the one’. Dave has a really good feel of where we all are individually and how the whole thing’s going down.

Did you go into the studio with a concept for the record or did you just pick the best songs that you felt produced a cohesive album?

Bill: We made it independently with just (Dave). As simple as it sounds we wanted to make everything we wanted to do. 100% our creative vision with him, no outside influences, nobody going, ‘well I don’t know, shouldn’t it be like this?’ It was just us five in the studio really for the most part.

Zach: We tried not to get too in the weeds about obsessing about what the record (should sound like). We basically tried to pick the best songs out of the collection of songs that we had that would make the best picture of where we’re at right now as a band. I think we did that. We’re excited about that.

You mentioned that you didn’t want any outside influences while making this record. As you were reliant on one another, was there anything that surprised you during the recording process?

Michael: I think we learn something from each other every time we go in and make a record. We haven’t made a record in a long time. We’ve been touring for so long and to come back in, everybody’s just taken it up a notch. That’s what’s cool to see for me. It just feels more natural. We just got in there and we’re a band, and that’s how it should be we think. We made a record that we think is great and proud of.

Will your fans be hearing much of the new record tonight?

Zach: We’re gonna play some songs we haven’t actually played yet live off the new record. This will be the first night we’re playing a couple of ’em.

So we’re going to be guinea pigs? I like it. Your fans are so excited about this new record. Are UK audiences a different experience to audiences in the US?

Zach: I don’t know. For us, it’s just so cool to get to travel and play music. That’s what we all grew up loving and wanting to do. To get to come over to a place like the UK and London, it’s crazy. I think the fans definitely want to dig a little deeper into all of the record. People want to find the songs on the album that they love and that’s kind of cool. I remember that from last time, people singing some songs that are more the deeper cuts on the album, which is kind of cool to see.

Are you planning to come back next year for a headline tour?

Michael: we are! That’s the plan. We’re putting together a real headlining tour. It’s going to be exciting. We haven’t announced anything yet, but we’re getting it all pieced together definitely.

Michael: We got some social media tweets and messages and hit everybody back like, ‘yeah, we understand. We’re going to come back and do a proper tour where everybody gets a chance to come and see us in some part’.

You said earlier you’ve been on the road a lot and you’re constantly touring. How do you prepare for that kind of gruelling tour schedule or do you just try not to think about it?

Michael: It’s kind of just a way of life and it has been since before we formed this band. We were all on the road and when we formed A Thousand Horse, we’ve stayed on the road. I think sitting at home is what feels uncomfortable (laughs).

Zach: We used to roll around in the van so things have come a long way from back in the days when we were sharing one hotel room and travelling in a van, sleeping on the floor and sharing beds. At least we all get our own rooms now.

Are you going to get any time to take a rest and spend it with your families over Christmas?

Michael: Yeah! We’re definitely spending Christmas with our families. We’re off in December and then we’ll be ready to get back at it next year.

Graham: Michael throws a a party for Thanksgiving. He calls it the Hobby Turkey party.

Michael: It’s a a pretty epic party! It’s like a pre-Christmas party and then that way everybody can do what they want for Christmas. We just do one big party.

You’ve got a busy 2020 lined up already with touring and the new album. Is there anything else you’d like to achieve?

Michael: We have tons of things that we want to achieve (laughs).

Zach: We’re already thinking about the next record. I know (the new record) is just coming out, but we’ve been living with those songs for a year or two years.

Now that music is mainly streamed, people expect new music all the time. Does that put pressure on you?

Bill: it’s a good pressure. If someone said we were going to record in two weeks I’d be like, ‘fuck yeah, let’s go write some songs’.

Zach: It’s honestly less pressure because you don’t have to feel like you’ve got to do all this album all at once.

Michael: We were just doing soundcheck and there’s a new song that we wrote after the record. Bill and I were just talking like, ‘well, fuck it, we should just learn it and play it live’. Why not? Because people can listen to it, get it on YouTube and whatever else they want. If you’ve got a song you love and you want to play it, play it. I think the streaming thing… that’s what’s great. You can just boom, boom, put music out and your fans get fed. It’s great.

You can get immediate reactions now through social media. How do you find that side of things?

Graham: We suck at social media. (the whole band laughs) That’s something we are actively trying to work on right now because we just have never been super good at it.

Zach: We live in the analogue world man (laughs).

Bill: Yeah, they’re putting my face on socks and t-shirts and all kinds of stuff (laughs).

Christmas is nearly upon us. What are your favourite Christmas songs and would you record any original?

Bill: We actually wrote some Christmas songs. We’re not going to bust any Christmas songs out tonight but maybe in the future. We wrote a couple for fun.

Graham: I’m an O, Holy Night man. That song is so amazing. It’s perfect musically. I love it.

Zach: Hark! The Herald Angels Sing, that’a a good one. I love that one.

Bill: It’s Christmas Time Again by Tom Petty, is just this great because everything he did was great.

Zach: I heard a Mariah Carey one at the coffee shop, that was pretty cool.

A Thousand Horses’ latest single Livin’ My Best Life is available to stream and download now. Watch the video below: