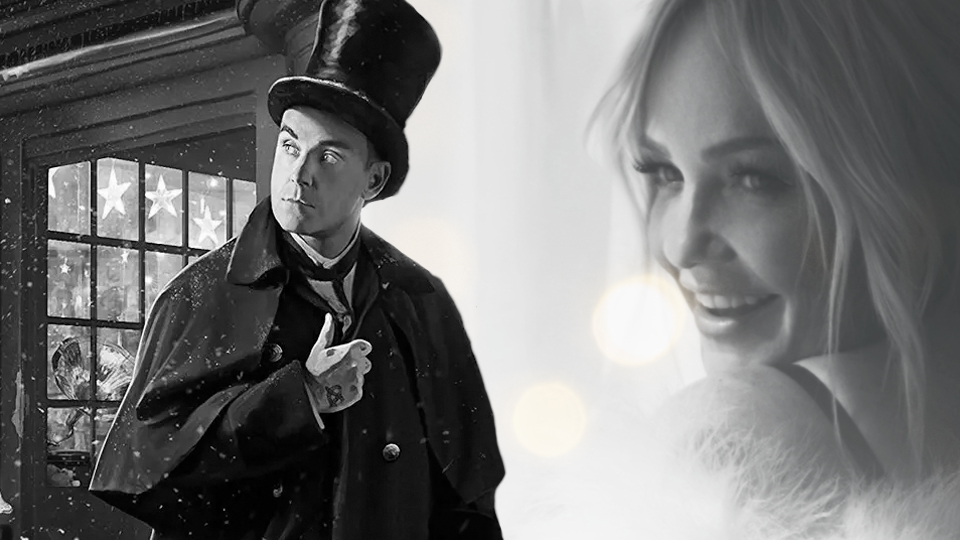 It’s not even December and already a slew of big name pop stars have unveiled brand new Christmas tracks, but which if any, of 2019 new Christmas songs will you be adding to your annual playlists alongside Mariah Carey, Michael Buble and The Pogues?

Little Mix – One I’ve Been Missing

One I’ve Been Missing is a doo-wop inspired ballad that’s an ode to festive love. The group’s harmonies are on point giving us a warm fuzzy glow. It’s not the girls first foray into Christmas songs as in 2015 they released a Christmas remix of their single Love Me Like You.

Tay Tay has dropped an upbeat festive song reminiscing about her memories of a Christmas Tree Farm.  With a video full of home video it’s a real cute fest for Swift lovers everywhere this December – was that her first guitar?

Robbie gives a glimpse of what life is like in the William’s household in the video to this new track Time For Change from his first Christmas album The Christmas Present, well double album actually; Christmas Past and Christmas Future.  Remember a dog isn’t just for Christmas, it’s for singing at Christmas too it seems.

One of our all-time Christmas covers is Spice Girls take on The Waitress’ Christmas Wrapping helmed by Emma and Mel C. Now Emma is preparing to bring Christmas magic to the Royal Albert Hall in December and has just released a brand new Christmas song – Coming Home For Christmas. It’s a gentle, retro sounding track that almost has a little sea shanty flavour, reminding us of What Took You So Long with added jingle bells. Emma’s also recorded a version of Santa Baby to help get you in the festive spirit.

Will released his eighth studio album Lexicon earlier this year, narrowly missing out on the top spot and now he’s given fans a seasonal surprise as he’s just released new track Christmas Time. On his Instagram, Will said of the track “It sums up the feeling of hope and love that can be so prevalent at this time and also a sense of reflection which I feel is very important at Christmas.”

No stranger to Christmas songs having released a festive album with Destiny’s Child back in 2001 featuring the unforgettable title track, 8 Days of Christmas.  Some 18 years on, Kelly Rowland releases this laid back R&B Christmas track taken from the TV Movie Merry Liddle Christmas in which she also stars.

Liam Payne – All I Want For Christmas

Not to be confused as a cover of Mariah, former One Directioner Liam Payne, dials the tempo down on this melancholic Christmas ballad.  There’s even a manga style cartoon lyric video (above) – is that Ghost from GOT making a cameo?

The Jonas Brothers continue their comeback by treating us to one of the more uptempo songs on this list.  The track was originally the idea of Freddy Wexler, who has written for Selena Gomez, Kanye West, P!nk, ZAYN and many more.  He told MTV.com that he was working on a screenplay for a Christmas film and decided he needed a new song in it and his wife suggested the Jonas Brothers as the perfect act to record it.  A few calls later and Christmas magic has brought this tale to a very happy en-en-ding.

Actress and singer Lea Michelle brings a theatrical vibe to her festive offering as she takes us around the Big Apple for a tour of all things Christmas in the city that never sleeps.  When combined with the video it does feel like a song straight out of a musical …or perhaps an advert for a shop?  We must point out other cities are available for Christmas.

2019 has been a great year for Mabel who has scored a number of hits including Don’t Call Me Up and Mad Love as well as releasing her debut studio album High Expectations. She is now giving us Sugababes’ vibes on this downbeat, pensive festive inspired track.  A track to show support for the lonely or a little bah humbug?  You decide above.

Idina Menzel – At This Table

Coinciding with Idina’s role in Frozen 2, which is in cinemas now, she has released a new album Christmas: A Season of Love featuring collaborations with Ariana Grande, Billy Porter, Josh Gad and Idina’s husband, Aaron Lohr.

Ingrid Michaelson and Jason Mraz have released Christmas duet, Christmas Valentine, as an Amazon Original, available to stream and purchase on Amazon Music.  The music video features an animated version of the duo celebrating a special holiday love in New York City.

Speaking of Amazon Music, last year Katy Perry chose to release an exclusive Christmas track with them called Cozy Little Christmas.  This year she gives us a video for the track, including Santa being massaged by a reindeer and puppets!  Katy is the gift that keeps giving.

Ok so not a new song, but more an update on a classic. John Legend released his Christmas album, A Legendary Christmas, last year but has updated it for 2019 with several new songs including this duet with fellow The Voice coach Kelly Clarkson. Despite both acts having fantastic vocals, the very woke updated lyrics including ‘it’s your body and your choice’ do jar slightly even though the sentiment is well meant. We fear the political correctness has been a little too over egg-nogged on this one.

Do any of the new Christmas songs top your tree? Tell us @Entfocusmusic