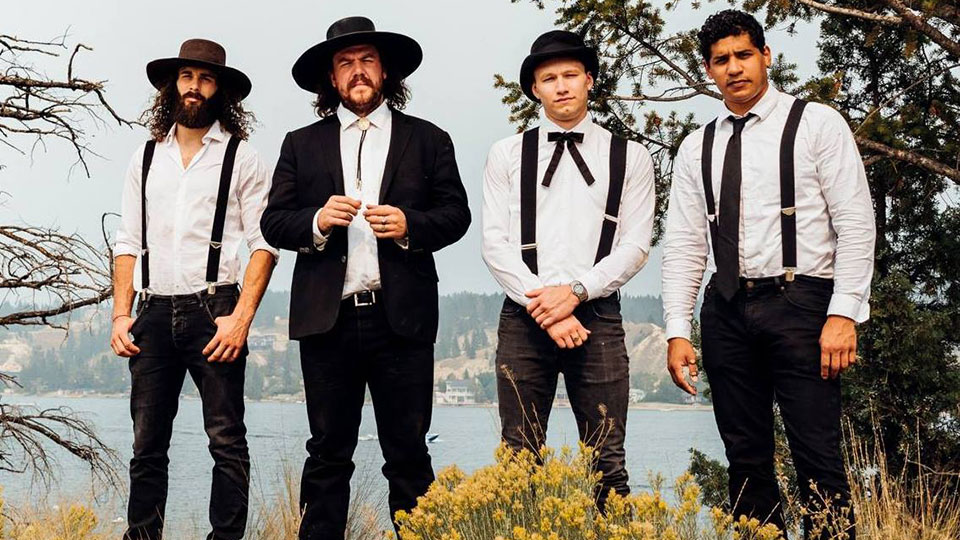 Canadian folk-bluegrass band The Dead South have been making music together since 2012. Consisting of Nate Hilts, Scott Pringle, Danny Kenyon and Colton Crawford, the band released their debut EP The Ocean Went Mad and We Were To Blame in 2013. Their debut album Good Company followed in 2014 and in 2016 their second album Illusion and Doubt peaked at number 5 on the US Bluegrass chart. Three years on from that release, the band is back with third album Sugar & Joy.

Produced by Grammy-winner Jimmy Nutt, Sugar & Joy features 13 new tracks that showcase The Dead South’s blend of folk and bluegrass. The album opens with 47-second instrumental Act of Approach, which showcases the band’s musicianship and leads into Diamond Ring, a song that puts lead vocalist Nate Hilts’ gruff vocals front and centre. When the harmonies kick in, the song is at its strongest and is reminiscent of a less commercial-sounding High Valley.

One of the first highlights on the record comes with Blue Trash. A furious banjo riff opens the song before Hilts’ vocal drives the melody. The uptempo track would be perfect for a honky tonk and it’s an example of why the band is catching on across the world. They have a knack for creating high-energy tunes that work well in a live environment. The musicianship is seriously impressive and incredibly tight.

The interestingly named Fat Little Killer Boy sounds like a lost bluegrass gem from yesteryear. The Dead South has created such an authentic sound that it could easily stand alongside some of the best in the genre. Elsewhere on the record Snake Man, Pt. 1 is a dramatic instrumental that acts as an intro to the fast and furious Snake Man, Pt. 2, Broken Cowboy is a slice of masterful storytelling, and Crawdaddy Served Cold is a traditional bluegrass moment that takes a more stripped-back approach than much of the record.

There’s no denying the talent the band has but at 13 tracks there are a couple that sound a little too similar to one another. It’s a small complaint to have but the songs all stick within a similar vein so it may take a few listens to fully appreciate and differentiate between them.

The album draws to a close with the punchy Spaghetti which is followed by a short instrumental, Distance Oneself, that echoes the way the album opens. It brings things to a suitable end and it feels like the record was built around a cohesive concept from start to finish.

The Dead South are seriously talented and it’s no surprise that they are catching on here in the UK. The band’s music is engaging, catchy and authentic, and when they all come together for the harmonies, that’s when they really soar. I’ve not heard such amazing banjo playing on a record for a long time and Sugar & Joy is full of it. If you’ve not checked this band out yet, I heartily recommend you do so.

In this article:The Dead South