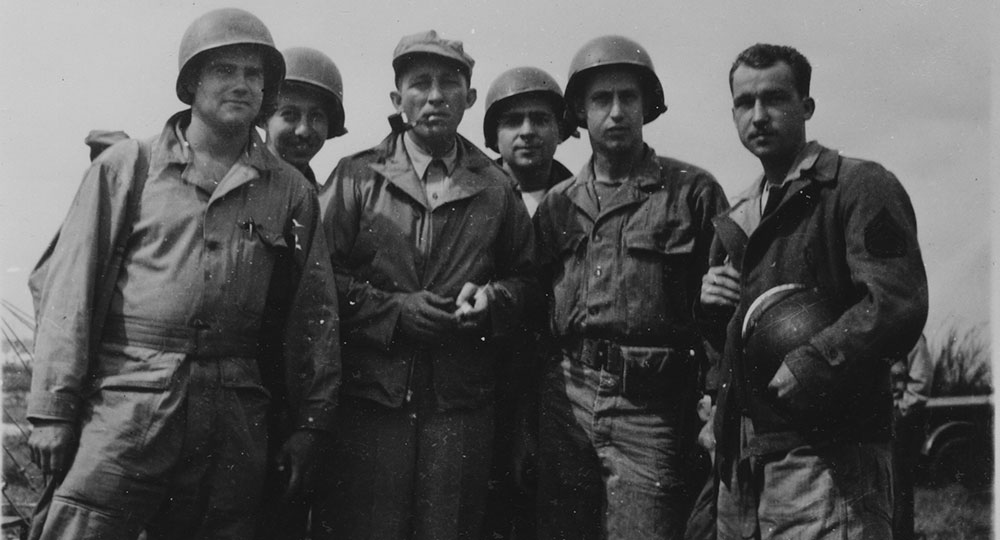 On the eve of the release of Bing at Christmas by Bing Crosby & The London Symphony Orchestra, the estate of the late star – HLC Properties Ltd – has released a series of extremely moving letters sent from Crosby to the families of young soldiers during World War II.

Alongside his words of support and reassurance are also handwritten letters to Bing, from those relatives, thanking him for bringing joy and a sense of hope to their beloved sons, husbands and brothers. A collection of photographs have also been released showing Crosby entertaining troops during World War II.

These images show Bing giving shows at the front lines, singing to crowds of soldiers in England, France and Belgium, performing on outdoor makeshift stages, usually wearing army fatigues and a cap, and in hospitals, perched on the edge of wounded soldiers’ beds. A rare colour shot shows Bing jotting down notes – most likely the soldier’s parents’ address for a letter.

Robert S. Bader, Vice President of HLC Properties Ltd. explains: “I’ve come to know and understand Bing a bit through archiving his correspondence, but I was simply overwhelmed when I found a box hidden in the attic of his home in Hillsborough, California. He kept these deeply personal letters in a safe place apart from everything else. The letters from the soldiers’ family members are often heartbreaking. These people felt such a deep connection to this man they only knew as a famous entertainer. And he lived up to their faith in him with equally heartfelt letters back to them. He didn’t want any accolades for this. He truly appreciated the sacrifices of these soldiers and their loved ones and was actually grateful for the opportunity to use his celebrity status to offer some small comfort to them.”

Crosby did more than most to support the war effort and he jumped at the chance to entertain the troops. The private photos and letters are not only of considerable cultural and historical significance – providing a further understanding into life during the war for both soldier and celebrity – they also reveal something more of Crosby’s character.

In a letter typed on ‘Bing Crosby, Hollywood’ headed paper, and dated 10th April 1945, Bing writes “It was a pleasure working for the boys in France and Belgium, in fact, one of the richest experiences of my life”. Even more affecting are letters from Bing letting worried relatives know that he had met their loved ones.

Equally touching are the handwritten letters to Bing from the parents or wives of soldiers. In one dated 5 March 1944, Beth Du Bois (Oakland, CA) says:

“It gives me a strangely comforting feeling to know that someone whose voice I can hear has so recently talked with my son whom I have not seen for almost two years. It brings them nearer somehow. We mothers of sons in the service are so grateful to you and the many others who bring a touch of home to our boys.”

Crosby’s recording of Irving Berlin’s White Christmas resonated especially strongly with those away from their loved ones, and is indeed mentioned in some of the letters. This simple song had a huge impact on the lives of soldiers and their families.

On Christmas Day in 1941, just after the attack on Pearl Harbour, Crosby introduced the song on his weekly radio broadcast. He then gave a live performance to thousands of G.I.s, many of whom were to lose their lives only a few days later in the Battle of the Bulge.

White Christmas went on to become the world’s biggest-selling single and – with over 50 million copies sold worldwide and, more recently, achieving over 1.8 billion streams (with an average of 18 million streams on 25th December alone every year) – still is.

Decca have released a new version of White Christmas with Crosby’s original vocals set to beautifully-orchestrated arrangements played by The London Symphony Orchestra.

Bing at Christmas with Bing Crosby & The London Symphony Orchestra is released on Decca Records tomorrow. Buy a copy now at Amazon.

Advertisement. Scroll to continue reading.
In this article:Bing Crosby