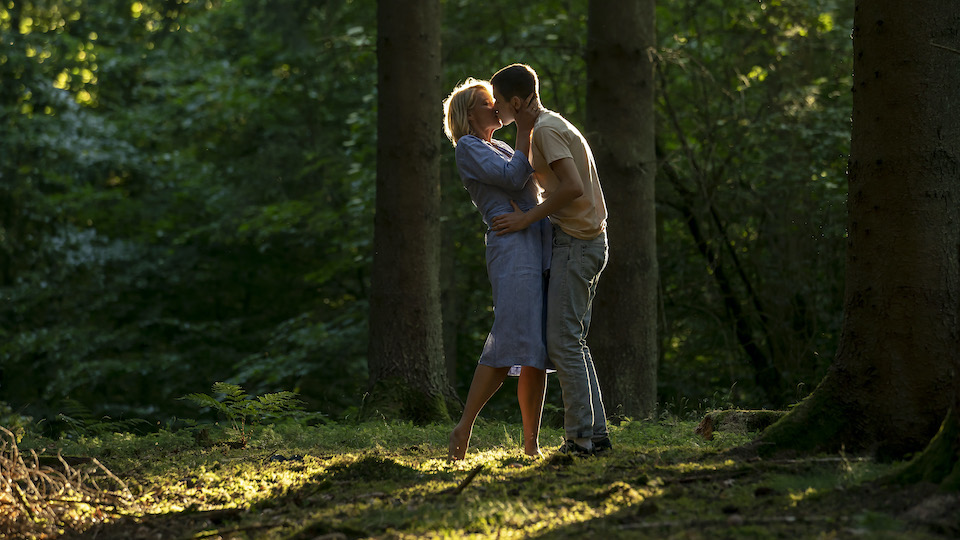 Adrian Lyne meets the chilly sensibilities of Scandi-noir, in this provocative drama from writer-director May el-Toukhy. Exploring the thorny and complex moral questions around the power dynamics of a wildly irresponsible affair between a middle-aged woman and a teenage boy, Queen of Hearts is a fascinating and stylishly executed film. But unlike the morality tales of Unfaithful, Indecent Proposal, and Fatal Attraction, this provocative portrait of a predator offers no easy answers.

Trine Dyrholm stars as Anne, a successful lawyer who specialises in representing vulnerable children and young adults. Her life is an almost perfect idyll – a handsome doctor husband, two adorable twin girls, and a gorgeous modernist house in the country. It’s all dinner parties, effortlessly chic outfits, and middle-class ennui. Anne is introduced as a person who is both righteous and candidly spoken. An early scene with her husband Peter (Magnus Krepper) suggests this is a sore point in their otherwise perfect existence. Everything is a debate with Anne, and she is never wrong.

Into this world of perfect order comes Gustav (Gustav Lindh), her teenage step-son. His mother has sent him to live with Peter as she can no longer cope with him. Troubled and angry, Gustav brings an immediate threat to the balance in Anne’s life. But to her he is like all the clients she deals with in her job, and she believes she can manage the situation. When he smashes up the house, she keeps it a secret between the two of them, but in exchange he has to try harder with his dad and his half-sisters.

A period of domestic bliss follows, which is shattered when Anne kisses Gustav. She then walks into his room one night and has sex with him, initiating a passionate affair between the two. You could feel the film building to this as the intimacy and intensity of their relationship heightens, but even knowing it’s coming doesn’t lessen the shock.

Trine Dyrholm and Gustav Lindh are sensational. We’ve known about Dyrholm for many years, so it comes as no surprise that she can turn in a performance as powerful and nuanced as this. The success of the film truly does rest on her faultless performance. But Lindh is exceptional too, and more than holds is own. He portrays an external toughness in Gustav, that is betrayed by a quiet intelligence and vulnerability.

There’s a certain inevitability about these kind of films, and you know going in that affairs such as these never stay hidden. But May el-Toukhy and co-writer Maren Louise Käehne’s screenplay has a few surprises. Events take an extraordinarily dark turn, and Trine Dyrholm takes Anne to places that are truly shocking, and in the era of #MeToo, will no doubt provoke debate and outrage.

Where the film falls down is in it being too detached. May el-Toukhy is determined that Queen of Hearts be a clear-eyed representation of Anne’s transgression, with no judgement in the way the story is told. She keeps everything at a distance, so as not to spoon feed the audience, but rather let them chew on the moral conundrum all by themselves. I admire that, but I do also feel as though it lets the filmmaker off the hook from having to properly unpack the psychology of what Anne does. Why does she do this? What is driving her? The truth is, we never really find out.

QUEEN OF HEARTS is available to rent/buy on iTunes, Amazon Instant Video, and Google Play