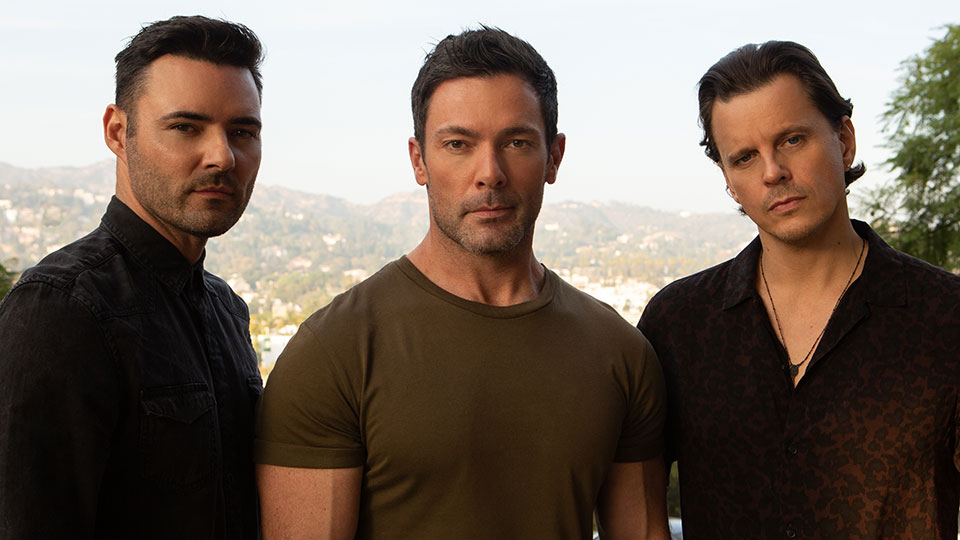 BBMAK – Mark Barry, Christian Burns and Stephen McNally – initially launched in 1999 but it wasn’t until 2001 when their debut single Back Here was re-released off the back of its US success that it charted in the Top 5 here in the UK. That paved the way for their Top 20 debut album Sooner or Later, which was certified Gold in the US, and was home to Back Here and follow-up hit Still On Your Side. The band continued making music until 2003 but they failed the match their early success and second album Into Your Head was a commercial disappointment in the UK. With reunion fever and nostalgia ever present at the moment, the trio reunited in 2018 and have recorded new album Powerstation.

Prior to the album’s release BBMAK unveiled new single Bullet Train, the lead track from the record. It has a slight influence of The Police and it puts the trio’s tight harmonies back into the spotlight. Not a million miles away from their original sound, Bullet Train showed that the group had grown and matured in a way that feels natural and organic. Second track So Far Away stays in familiar territory combining piano with a bombastic pop/rock edge. Again it’s the harmonies that stand out on the track and they really are what makes BBMAK so special.

The album begins to experiment a little on third track No One Like You. With a catchy ‘oh oh’ repetition and stronger rhythms, the song takes the band away from the sound that made them famous and it’s one of the album’s first highlights. After that the songs all focus on bringing out those harmonies and showcasing the three members’ strong vocals. The gorgeous Uncivil War could be a song from the latest Backstreet Boys album, and that’s a compliment rather than an insult. Best-described as adult contemporary, the mid-tempo ballad sees the trio soar and it’s gorgeous.

Elsewhere on the record You Don’t See Me is a slow-building and memorable pop gem, We Can Be Lovers packs more of a beat taking the tempo back up for a few minutes, and Falling Up has a little bit of a The Greatest Showman vibe both musically and lyrically. Piano ballad Wolves is the moment that truly shows what the band can do vocally with layers of harmonies creating a beautiful soundscape.

The final two tracks are the love song Out of Time and the short folksy title track Powerstation. The latter suggests that a folksier record could work for the band in the future and I’d definitely be interested in hearing something a little more stripped back.

BBMAK made the record they should have made with Powerstation. It’s a love letter to their fans and it stays true to the music they made back in the early noughties. There’s enough on here that works in the contemporary music market and I like the fact that they’ve evolved rather than attempted to revolutionise their sound. Powerstation is an album that may well go unappreciated but it really shouldn’t.