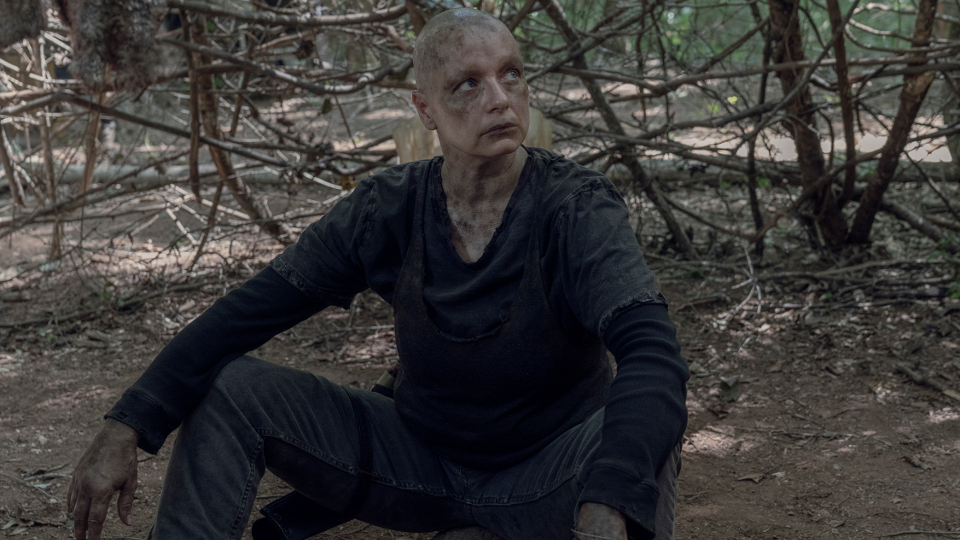 In the latest episode of The Walking Dead, Negan (Jeffrey Dean Morgan) found himself idolised by an Alexandrian.

The episode began with Kelly (Angel Theory) out hunting. She had been with a group but stayed out alone as she was tracking a pig. While tracking her hearing deteriorated some more, leaving her unable to hear. She managed to use her trusty catapult to stun a pig, allowing her to get close enough to kill it. Without her hearing though she was vulnerable and some walkers heard the kill and surprised her. She managed to fight but had to flee her kill. In her rush to escape she fell down and became injured.

Back at Hilltop, supplies were going missing and Yumiko (Eleanor Matsuura) suspected Magna (Nadia Hilker) was the thief. When Kelly didn’t return, Daryl (Norman Reedus), Connie (Lauren Ridloff) and Dog set out to find her. Magna also caught them up to help. They found Kelly in a bad way and Magna revealed the location of the stolen supplies. Connie asked Daryl to keep quiet and said they could just say they found them.

Magna later confessed to Yumiko. She also came clean on her backstory and explained that she wasn’t falsely imprisoned. She had infact killed someone who sexually assaulted her cousin. Yumiko wasn’t happy to have been lied to and told Magna to find somewhere else to sleep.

Much of the episode focused on the recently escaped Negan. It remains a mystery as to how he got out of his cell, but he was wasting no time in distancing himself from the survivors. He was eventually joined by a young chap called Brandon who idolised Negan. His father had been killed by Rick Grimes and Brandon was optimistic that he and Negan could build a new Sanctuary.

Negan wasn’t really interested and found Brandon to be annoying. After a fight with a walker, Brandon opened up his backpack and presented Negan with his old leather jacket and Lucille. Negan refused saying he needed to not draw attention to himself by being recognised.

The pair came across a woman defending her son on an old bus filled with walkers. Negan rushed to the rescue and then tried to help them. Brandon came up with a plan to murder them and steal their supplies. Negan told him things would get dangerous and that he should head back home or somewhere (anywhere) else. Brandon took off but returned while Negan was collecting firewood. Brandon thought Negan was setting him a challenge and had murdered the mother and son. A furious Negan smashed Brandon’s head in with a large rock before making off with the backpack containing his former belongings.

Elsewhere in the episode, Ezekiel (Khary Payton) got checked out by Siddiq (Avi Nash). After Siddiq found a lump in his neck, Ezekiel revealed that his family had a history of thyroid cancer. Without access to modern day medicine and the necessary advanced treatments, Ezekiel feared the worst. However Siddiq remained optimistic. He later tried to setup a radio conversation with Carol (Melissa McBride) but Ezekiel couldn’t go through with it.

We also spent some time with the Whisperers. Particularly Gamma (Thora Birch) who was off doing Alpha’s (Samantha Morton) dirty work. She was given a task to poison Hilltop’s water supply with walker blood. It was revealed that all the recent attacks on the survivors were Alpha’s doing. One Whisperer suggested they just unleash the horde but Alpha explained how small actions could cause the communities to collapse. She demonstrated by cutting the leg and arm of the man who spoke out before having Beta slit his throat.

His body was given to Gamma to continue her mission. Gamma suffered flashbacks of recent events and took her anger out on the man’s body. This was witnessed by Aaron (Ross Marquand) who offered her a bandage. Gamma grabbed it and left without speaking. She later confessed the incident to Alpha who suggested that Gamma might be able to use Aaron to their advantage.

At the end of the episode, Negan strolled into Whisperer territory wearing his leather jacket while wielding Lucille. He called out and began slaying walkers. It wasn’t long before Beta arrived and knocked him to the ground. Negan seemed to be looking for a fight but the episode ended before we saw what happened next.

Can’t wait for the next episode? Read our preview of The Walking Dead – 10×06 Bonds.