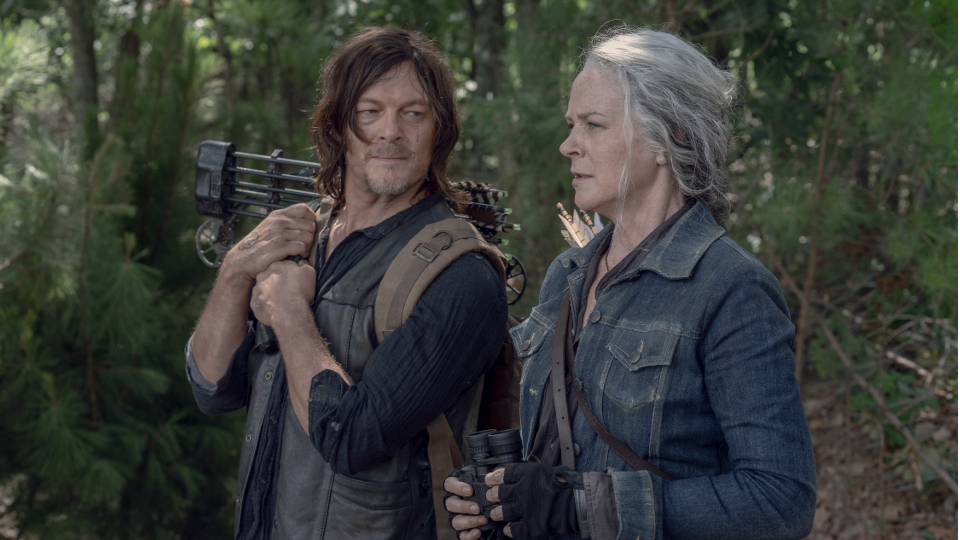 On the latest episode of The Walking Dead, Gamma (Thora Birch) carried out a mission for Alpha (Samantha Morton).

The episode focused mainly on Negan (Jeffrey Dean Morgan) who, having recently escaped his prison cell, tried to distance himself from the survivors. However he was tracked by a young man named Brandon who wanted to help Negan rebuild the Saviours.

Brandon even brought along Negan’s old leather jacket and Lucille to show his devotion. Negan was impressed but a little creeped out and seemingly not all that interested. If anything he viewed Brandon as an annoyance. The pair came across a mother and son who were trapped by walkers. Negan saved them and wanted to help them but Brandon had other ideas and murdered them. He hoped to impress Negan but instead was met with rage as Negan caved his skull in with a rock.

At Hilltop, everyone was worried when Kelly (Angel Theory) didn’t return from a hunting trip. She had stayed out alone to track a pig but ran into trouble when she lost her hearing. Daryl (Norman Reedus), Connie (Lauren Ridloff), Magna (Nadia Hilker) and Dog set out and tracked her down.

Elsewhere in the episode, Ezekiel (Khary Payton) confessed to Siddiq (Avi Nash) that he thought he was suffering from Thyroid Cancer. At the Whisperer camp, Alpha tasked Gamma with poisoning the survivor’s water supply. It was revealed that Alpha was behind all the recent attacks on the survivors.

At the end of the episode, Negan went off in search of the Whisperers. It wasn’t long before he found them and was knocked to the ground by Beta (Ryan Hurst).

Watch the promo trailer for The Walking Dead 10×06 below:

The sixth episode of season 10 is Bonds. Carol teams up with Daryl as they embark on a mission together; Siddiq finds it harder than expected to unravel a mystery.

Tune in to AMC on Sunday 10th November at 9/8c in the US and FOX on Monday 11th November at 9pm in the UK to see the episode. Preview it with our gallery below: