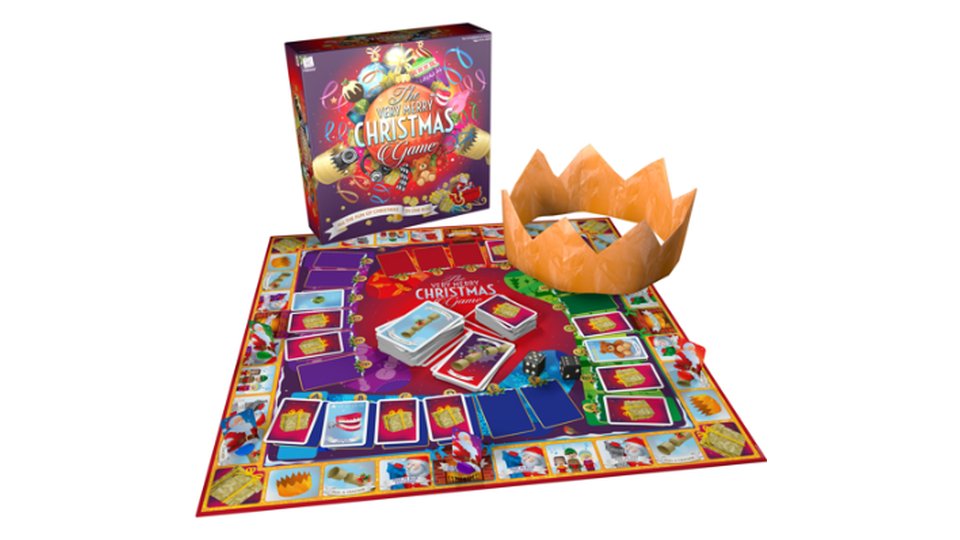 For me, board games will always hold a special place in my heart. It’s sad to see the youth of today turning their noses up at traditional games, opting instead to immerse themselves in video games. I spent many hours playing board games with family and friends over the year, and some of my happiest memories are getting everyone together for a good competitive game that actually required you to interact with one another. With the festive season almost upon us, it’s nearly time (for my family any way) to dig out the board games to play over Christmas.

A new addition to this year’s pile will be The Very Merry Christmas Game, the latest game from Rascals. I’ll admit going into it, I was a little dubious as to whether I’d be charmed by the game and a cursory glance over the box did little to put away my doubts. The Very Merry Christmas Game is surprisingly simple and it’s pretty eye-catching thanks to its colourful board, playing cards and pieces. The first time you play it, you may feel bamboozled by the extensive instructions but don’t be, as they are very easy to get to grips with and after a few turns you won’t even need to look at them.

Essentially The Very Merry Christmas Game is for a minimum of two players but if you want to get the most of it I suggest you play with at least four, or double up into teams. Each person or team picks a coloured playing piece before locating the relevant fireplace on the board. Each player has a stocking, which they need to fill with high-value presents in order to win the game and they start off with two mystery cards placed in the stocking.

By rolling the dice, each player progresses around the board where they will find a host of squares offering different activities and interactions. You can sneak a peek in your stocking (or the stocking of someone else), collect presents to place in your own stocking or that of another player, or pull a cracker with a player of your choosing in the hoping of stealing away or exchanging one of their high value presents with one of your low value ones.

A nice little touch is that players can land on a carol-singing square and they have to sing a Christmas song. No song can be performed twice during the course of one game and if your singing doesn’t please the other players, you can lose one of your presents. For those that don’t like singing in public, make it your mission to land on the party hat square so you can wear the Christmas part hat and be immune from having to sing.

Once all of the stockings are full, each player can turn over their present cards and find out what’s in their stocking. If someone has a single sprout card, they automatically lose and are out of the game but if someone has two sprout cards they automatically win. If there are no sprout cards, or no one has two, the rest of the players add up the stars denoted on each present card and the one with the highest number of stars wins.

The Very Merry Christmas Game is a very simple game but it’s so much fun. I had such a good time playing it that I went on and played multiple games straight after the first one. Unlike many board games out there these days it’s not trying to be complicated and its sole aim is that you have fun. I laughed a lot while playing it and it’s perfect to play with the family, as it’s very family friendly. I know I’ll be playing it a lot over the festive season and I highly recommend it to anyone looking for a bit of extra fun this Christmas.

In this article:Rascals, The Very Merry Christmas Game