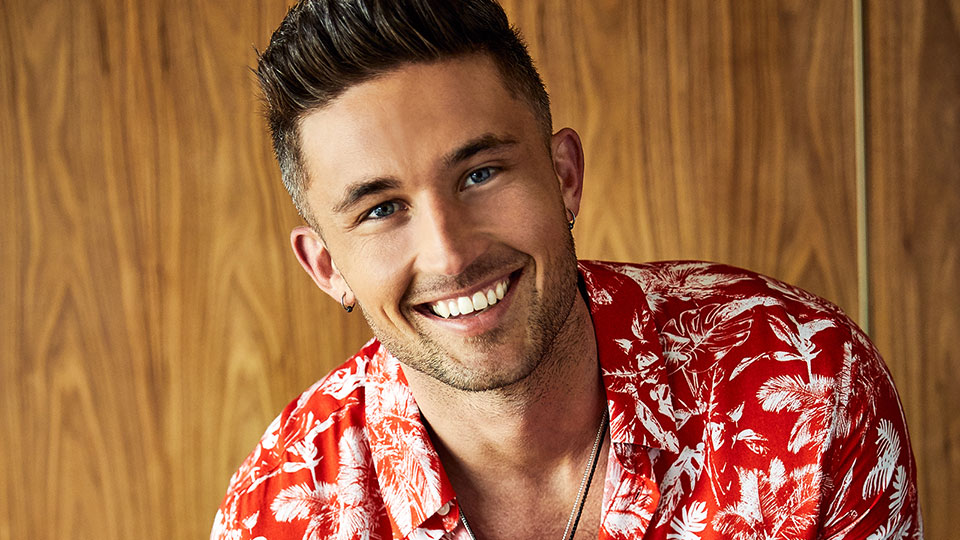 Michael Ray made his first trip to the UK in March as part of C2C: Country to Country where he played several shows over the course of the weekend.

Pulling one of the biggest crowds outside of the main arena, Michael wowed and he didn’t wait long to announce he was coming back for his first-ever UK headline tour. The acoustic trek kicked off in London at Bush Hall during Country Music Week in October.

I sat down with Michael just hours before the show to talk about his return to the UK, discuss the video for new single Her World or Mine and find out the status on album number 3.

Welcome back. It didn’t take you long to return to the UK did it?

Thanks, man. No, on purpose we wanted to get back as soon as we could.

You were easily one of the breakouts at C2C in March and people have been so keen for you to come back since. I thought you should have been on the Main Stage and a lot of people agreed. What was it like to be getting that kind of feedback after your first shows here?

It was awesome, especially to be over here for the first time. That was my first time ever coming to Europe. Just to already see people singing the songs and and then to walk off stage and feel that connection, even though a couple of times we were only on stage for 15 minutes – it was a quick turnaround – to feel that connection as soon as we walked off was was pretty incredible and validated that we need to make this thing and come back more often. I think we did seven shows in those two or three days (laughs) and I remember telling my manager that we’ve got to make sure we get back here fast. I want to build this because I just love the energy. I love being over here and to see everybody so already involved in the music and album cuts and deep cuts and songs I forgot about (laughs) on old albums was pretty cool.

You seemed to be everywhere during C2C. I managed to see you three times and two of those times I wasn’t even trying. It was a crazy schedule wasn’t it?

It was, yeah but we did that on purpose because I wanted to come over, pay my dues and play as many places as possible and let people know that we’re here and we want to come back. It was my first time coming over here so it was kind of a new artist type thing and I wanted to play whatever stage I had offered so we did. I feel like it worked.

Since I last saw you there’s been a big change in your personal life and you’re now a married man. Congratulations! I saw the Mr Pearce jacket that Cody Alan gave to you. Do you have it with you tonight?

(laughs) I don’t have it with me tonight no. They surprised me with it on CMT Top 20 the other day. Somebody made her one and then Cody Alan felt that I needed one too (laughs).

Just as a reminder (laughs). Totally. We might have to do that.

Tonight you kick off your first-ever UK headline tour. How are you feeling about it?

Feels good, man. It’s different. I’ve only played over here a few times and this is only my second time over. It’s all broke down acoustic. I want to approach this tour over here as like kind of a living room setting and really get to know the fans and the fans can really get to know me. I’ll tell some stories between songs of why I’ve recorded them or wrote them. Hopefully we all leave feeling closer and just have a night full of fun stories and music, and just be real and authentic. If they have questions then I want to answer them. Just like a living room so we can really start building this relationship.

You know we’re a passionate bunch…

You definitely saw that at C2C and I think it’s going to be rowdy tonight. Last night was a bit more subdued because it was Monday and the first day of Country Music Week but we’re on Tuesday now so people are ready to drink and get into the party spirit…

Oh, Tuesday’s the day? Is that when it starts?

OK, good. Well, I’m always down for that.

When we spoke before C2C, you mentioned that you were starting to think about the next record. What’s the status on that?

We actually started recording last month. I got two new songs. I go back in on the 15th November when we’ll cut two more. I’m taking the whole month of January off to just write and record and really dive in on this new album. We’ll have new music out next year for sure.

You’ve just dropped the video for Her World or Mine, which is one of the best tracks on Amos…

The video is very personal video and emotional. Was it quite tough for you to come up with that concept and create it?

Yeah. We talked about doing that and really talking about that part of my life, my parents divorce and my grandmother passing. There are parts in the video that are very, very real. I told them if we’re going to do this then we’re doing it, I wanted to lay it all out. There’s a few moments when we were filming that I looked on the screen and it was a little too close to home (laughs) and it hit a little hard. I know that if it hits me that way, then it’s hitting somebody else that way too that might need to see that and might help them make sense of something that they’re going through. One thing I wanted to do on that video as well was to show the different versions of what Her World or Mine could be.

The song’s about a breakup so that’s why I tied in my mom and dad’s divorce. Also my sister went through a bad relationship so that’s who the girl is with the guy. The one thing that isn’t 100% authentic is that my grandfather passed before my grandmother but I wanted to get her story out there. That story of Her World Or Mine being she’s gone and now we’re stuck here and her wish that she was with us. There’s so many different layers of what Her World or Mine can mean.

That’s what’s great about Country music too, is you could listen to something and I can listen to something and it hits us both in the way that we’re living right then. Whatever that might be, whether it be a breakup or a loss of a loved one or whatever it is. It’s a deep video and there’s some layers to it. I’m so proud of it and I’m proud that we got to tell that story. The reaction that we’re getting and the stories that are coming out of it, people are saying how it helped them get through their passing of somebody they loved or it hurt watching it because it reminded them of their parents divorce. That type of stuff. It helped them mend some feelings so that’s been really cool to be part of.

The video has Chad Michael Murray in it as your Dad. I understand you two met at an awards show and have been good friends ever since…

Yeah. I actually met Chad at the CMT Awards a few years ago and we hit it off. He’s one of the most great human beings on the planet. We hit it off immediately and hung out that day and afterwards. When it came time to plan this video, I was like, ‘who can we get to really put their all in this?’ and I knew he would do it if he was free and had a couple of extra minutes in his busy schedule. He jumped right on it and said yes as soon as I asked him.

It worked out really well didn’t it?

It did, man. It was weird watching. We filmed it in L.A. so we had him who’s an A-list actor and all these other actors and actresses who’ve been in movies. Just to see them work the way that they do was pretty inspiring and pretty cool, and just the way they were telling the story. There wasn’t a script. It wasn’t like a movie and they just crushed him. It was really cool for me to see to see them do their thing.

Oh, yeah. My dad was pretty honoured that Chad played him.

My favourite Christmas song probably is, it’s not a real well-known one, There’s a New Kid in Town. I remember my grandparents playing that song back when I was a kid.

Would you consider a Christmas album maybe in the future?

Yeah, I’d never say no to it. It hasn’t made sense yet but I would do it for sure if it ever made sense. I know, Carly and I’ve talked about maybe doing some stuff together one time. Maybe we could do a couple of Christmas duets or something like that.

We should. We ain’t saying no, I’ll tell you that. We’ll end up doing it someday, I’m sure.

How’s 2020 shaping up for you? What’s that looking like at the moment?

Hopefully you’ll come back here and play the next size venues?