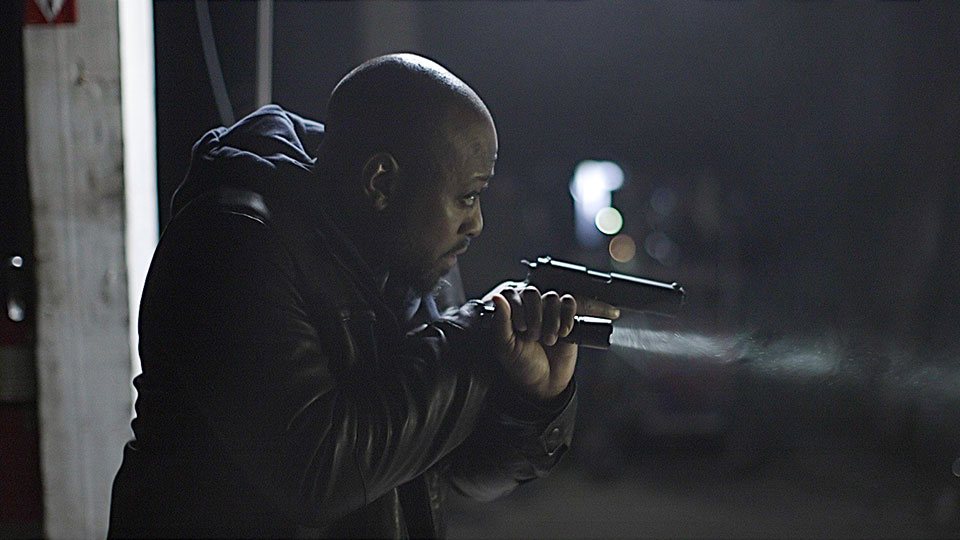 On Halloween night 2015 Patrick ‘Trick’ Weaver (Thom Niemann) murders all but three of his classmates during a house party. Detective Mike Denver (Omar Opps) and his partner Sheriff Lisa Jayne (Ellen Adair) are assigned the case and when they visit an injured Trick in hospital to find out why he committed the murders, Trick escapes and goes on the run. Each Halloween after Trick reappears, killing more innocent people and Denver becomes obsessed with catching him. In the present day, Denver is forced into retirement but he once again partners with Sheriff Jayne when Trick comes after them both.

From director Patrick Lussier, who co-wrote the film with Todd Farmer, Trick is a supremely silly but hugely enjoyable slasher film. Incredibly fast-paced and full of ultra-violent set-pieces, Trick isn’t going to win any awards but it’s one hell of a ride if you allow yourself to go along with it. There’s no time wasted setting the scene, instead the audience is thrown straight into Trick’s first massacre. From there onwards the pace doesn’t let up once and it’s a non-stop thrill-ride of gruesome murders.

Plotwise Trick covers most of the tropes you’d expect from a slasher film including a killer that seemingly can never be killed and a detective obsessed with putting a stop to the killer’s rampage. You can predict every character that’s going to die along the way but that never hampers the fun. Instead I found myself wondering how they were going to be murdered, and for the most part I wasn’t disappointed.

Lussier and Farmer try to insert a sub-plot about Cheryl (Kristina Reyes), one of the girls that survived Trick’s initial murder spree, but it’s just an unnecessary distraction from the main action. There’s an attempt to tie it all together by the end, which does kind of work, but the film would have been fine without that.

If you’re expecting any character development then Trick’s the wrong film for you and the same goes for memorable performances (although Tom Atkins is fun). Every character ticks off a stereotype of the genre and many are there purely to be murdered. The violence is plentiful and it’s surprisingly nastier than you’ll probably expect. Trick is without a doubt a b-movie horror and it knows that, even if its script has you howling with laughter unintentionally several times during the course of the film.

Sophisticated Trick certainly isn’t but it’s very entertaining. The climax is a load of old nonsense but I didn’t really care. I’d had so much fun getting to that point, that I was happy to accept anything in the final act. Trick kept me hooked from start to finish and while my brain may have gone intro neutral, I’m kinda keen to watch it all over again with a bucket of popcorn and a load of mates. Will it go down in horror history? No it won’t but it will be a film I rewatch occasionally when I need to take a break from reality.