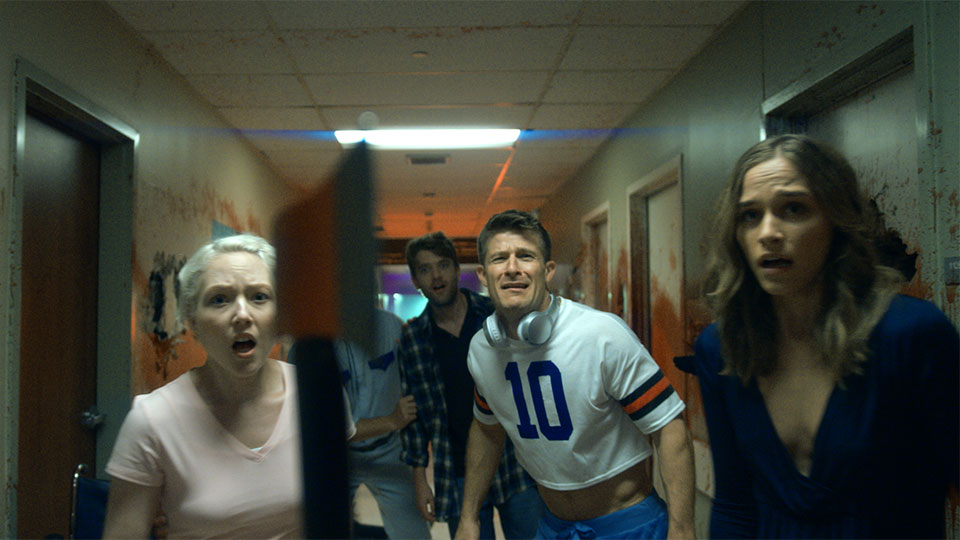 Horror fan Chad Buckley (Jeremy King) spends his days working in his struggling video shop and arguing with his only regular customer Sam (Byron Brown). During their latest squabble Hawn (Hawn Tran) turns up to apply for a job at the store, upsetting Sam who is desperate to work there. As Chad shows Hawn the ropes and teaches him the Rules of Horror, they both start to suspect the other of keeping a secret as Sam watches everything unfold.

Scare Package is an interesting film that essentially threads together seven short films around the story of Chad, Hawn and Sam in the video shop. Each of the shorts is directed by an up-and-coming horror director, showcasing a wealth of US talent that could well be appearing at the next Arrow Video FrightFest events in 2020. The film opens strong with Cold Open, directed by Emily Hagins, the tale of a would-be actor who wants to be a lead role but keeps getting told he’s not a character actor. In his bid to prove everyone wrong, he plays a prank on the neighbours, which goes from bad to worse. It’s funny, entertaining and satisfyingly gory.

The scenes of Chad and co at the video shop act as a bridge between each of the shorts, which fit into the film to demonstrate the rules of the genre as Chad teaches them to Hawn. Each one of the shorts subverts the usual horror tropes while paying homage to them at the same time. This is most evident in the fantastic One Time in the Woods, directed by Chris McInroy, where a family happen upon a man about to change into a monster and end up being attacked by a maniac. The gore level in that one is epic and the short is so, so funny/ The writing by McInroy is very sharp and it’s one of the highlights of the film.

Elsewhere Anthony Cousins’ The Night He Came Back Again! Part IV: The Final Kill pokes gentle fun at the idea of horror killers being invincible as a bunch on young things try to stop a maniac once and for all. The post-modern twist that they are aware the killer can’t be killed only adds to the hilarity. Aaron B. Koontz’s Horror Hypothesis is very clever too with a bunch of characters realising they are horror film stereotypes.

Not all of the shorts hit the mark. Courtney and Hillary Andujar’s Girls’ Night Out of Body is randomly abstract without much of a punch and Baron Vaughn’s So Much To Do is inspired by a Street Fighter like computer game but goes on a little too long and stops being funny pretty quickly.

Scare Package is an inventive, creative and thoroughly entertaining film that really does showcase some fantastic new talents. It’s a little uneven in places and not everything works but the general concept is pretty refreshing. There are more hits than misses and the laughs come thick-and-fast. Add to that great special effects and this is a little gem that I hope finds a much wider audience.