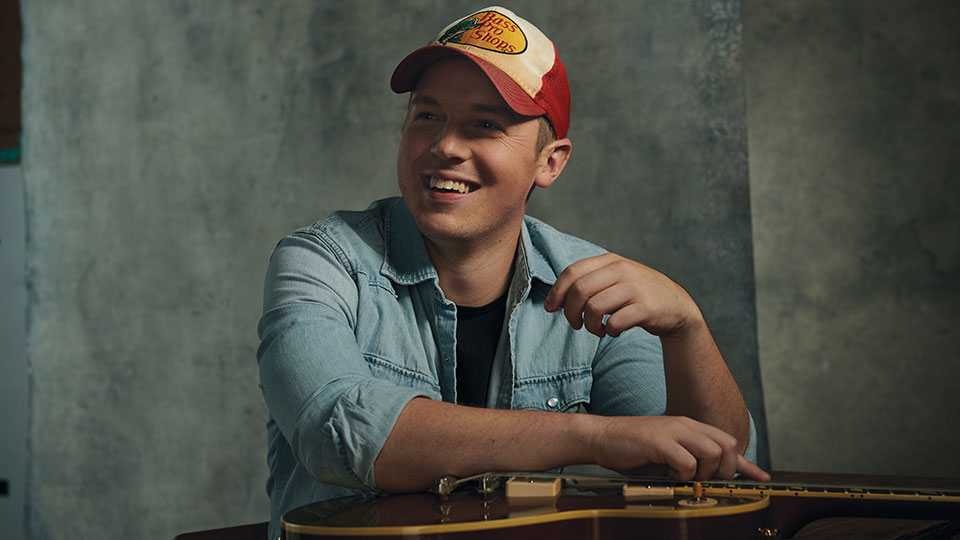 Georgia-born singer-songwriter Travis Denning made his first trip to the UK in March to perform at C2C: Country to Country.

He was one of the weekend’s breakouts and he’s wasted no time getting back over here. Last month he was part of the line-up for the Introducing Nashville tour alongside Rachel Wammack, Walker Hayes and Danielle Bradbery, where he solidified his growing fanbase.

I caught up with Travis before the final show in London, which was part of Country Music Week, to talk about his experiences playing in the UK, discuss his new music plans, and find out how 90s Country inspired his music.

Travis, welcome back. You were here in March for C2C and everybody was talking about you the whole weekend. What was your experience like when you were here?

It was awesome man, it was eye opening. It really was. I know that there’s a crowd here and there’s there’s a group of people who want to hear Country music but it was surreal to feel like I made an impact here in the seven days that I was here for C2C. I couldn’t wait to come back. It was just a great taste of the possibility of what’s over here and it was amazing.

You were definitely one of the breakouts of C2C. People haven’t stopped talking about you. Since we last saw you, you’ve been putting out a few singles. What’s the plan moving forward? Will you keep dropping singles or are you working up to an album?

We’re working up to a record, a full record. My current single’s on the charts in the States and it’s climbing. It’s a slow climb especially as an early artist. The singles are more about telling the story and the next chapter of all the things that I want people who are finding out about me to see and to get a taste of. As most things go and the single’s a little higher up the charts, I think we’ll put a full record out. We’re still working on it and we’re still working on music. It’s exciting, you know. The singles have just been to get people to listen and hear different things that I’m able to focus on when it’s just one song.

Heartbeat of a Small Town is your latest track. What’s the reaction been like to that?

It’s been awesome man! It’s been a big thing live and that was a big part of that song. So many people asked about it and wanted to hear it. We just wanted to have it out, especially for college football and American football’s back-end season. I think that song really lends itself to this time of year. I don’t know what it is but that’s what I see and think about when I play that song. I just wanted people to get a taste of that.

You’re over here at the moment for the Introducing Nashville tour. Have you seen an audience building here for you since your last visit?

Oh, totally. It’s been unbelievable. It’s just been insane to go to Europe, to go to Scandinavia and Germany and Amsterdam, and just run into Country music fans. It’s absolutely awesome. It’s not surprising but it is surreal. It is very insane that I had this opportunity. I feel like tonight I’ll be able to feel it since we’re returning to the scene of the original crime, I guess you could say. It’s gonna be really cool and I’m just excited. I love London. It’s a fun city and I’m glad we’re finishing off the tour here.

This show tonight is your last of the Introducing Nashville run but it kicks off Country Music Week here in London and launches C2C 2020. That must be quite special?

Are you plotting a return to the UK in 2020 for maybe a headline tour?

Yeah, we’re definitely thinking about it. I think it’s going to come down to when it going to be the right time. We’re gonna be out on the road, God as soon as the New Year rolls around, stuff I can’t necessarily announce yet, but we’ll be out on the road. We’ll find some time. It’s definitely something I don’t want to ever abandon. I want to just keep coming back. I mean, it’s so worth. Who can imagine that after a few trips that there’s a potential to go to a whole other country, whole other part of the world and do the same thing I do where I come from. It’s really special.

Some artists worry that the themes of their songs might not resonate with UK audiences because the stories are so steeped in American culture. Has anything surprised you in terms of the reaction of UK fans?

Well, there’s no surprises because my first single was about the most American thing in the world, which is fake IDs so you can drink before you’re 21. I remember singing that song going, ‘they are not gonna get this. This is literally a song about a law in another country’ but they loved it and they sang it back. People embrace the music and they connect to it for a lot of different reasons. Who cares what that reasoning is? If they’re connecting, then that means something special is happening. I just try to do my thing and do exactly how I would do it when I’m home because that’s who I am. I don’t want to ever feel like I’m having to change anything and I definitely don’t feel that way when I play to the fans over here.

When I hear people talk about your music, they always mention how it embraces tradition rather than the mainstream sound. Is traditional Country music something you grew up on and are inspired by?

Yeah, totally. I’m constantly inspired every day by other artists in the format. I just love songs. I think that’s really my biggest inspiration that created the music that I’m making. I’m a rocker at heart and I fell in love with AC/DC at an early age and Southern Rock has been a part of my life, my whole life. I grew up 25 minutes south of where the Allman Brothers lived so there’s that aspect that’s always going to be in the music. I think rocking guitars and loud drums. that’s a lot of the reasons people fell in love with 90s country music. Brooks and Dunn were cranked to 11. They were so awesome and the same with Garth Brooks. I think that’s the foundation and tradition of some of the earlier country music that I love so much and that I really root in my music. That’s why sometimes people say it leans a little more traditional or a little maybe 90s or 80s. It’s just because that’s the stuff I loved.

90s Country got me into the genre…

There’s something about that decade. It’s become such a standard opinion but it is true. There’s something special about that music. I think that was just when Country really solidified the here to stay mentality and here to stay on a global standpoint. If you think about how big Garth Brooks was and the reach that he had. Kenny Chesney was playing football stadiums in the mid 2000s because of the music and the groundwork he laid in the 90s. There’s just something special about that era of music. I definitely think a lot of music now in Country music is leaning hopefully closer to that timelessness that the 90s had.

Country even took off a little bit here in the 90s with Shania Twain selling well and charting high, and the Dixie Chicks gaining ground. It’s amazing how far it’s come since then…

And now with the technology there’s no wait. There’s couple of months behind thing. When it comes out, it comes out. It’s available everywhere.

We’re on the countdown to Christmas now so what’s your favourite Christmas song?

Is there a Christmas record in your future, do you think?

Not anytime soon, but maybe at some point. Maybe I’ll do a weird borderline hard-rock version of something with some Country twang or something just to totally mess things up.

I think that would work. I think it’d be cool.

Travis Denning’s new single Heartbeat in a Small Town is out now. Take a listen to it below: