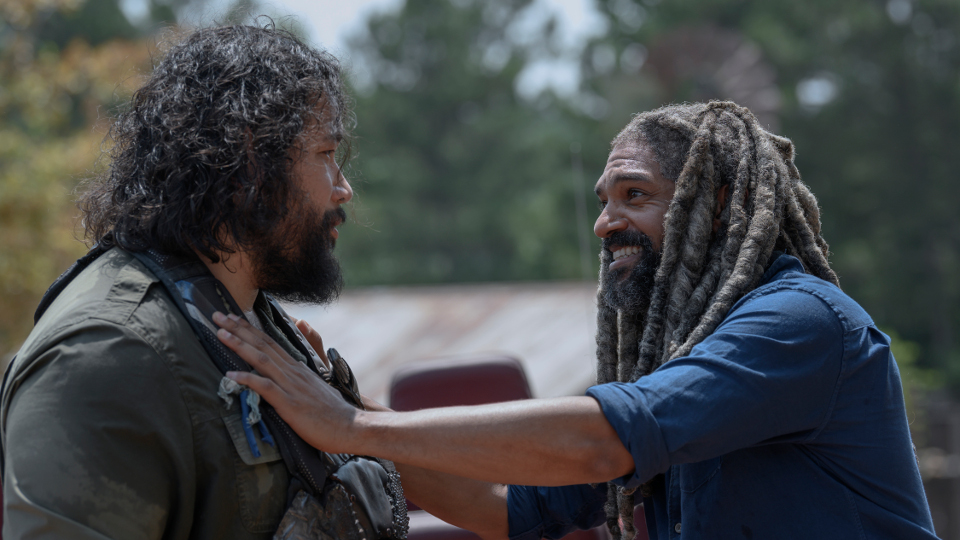 In the latest episode of The Walking Dead, Ezekiel (Khary Payton) found himself in a bad place, while Negan (Jeffrey Dean Morgan) tried to do the right thing for a change.

The episode began with a bit of a montage showing what some of the main characters were up to. Carol (Melissa McBride) was hiding away in her room and not even opening the door to Daryl (Norman Reedus) when he brought her food. Meanwhile, Siddiq (Avi Nash) found himself still struggling, Lydia (Cassady McClincy) was having a hard time herself and Yumiko (Eleanor Matsuura) and Magna (Nadia Hilker) were getting steamy.

The community at Hilltop found themselves scrambling when an a fallen tree took took out part of their defences. Half of the community were convinced that the Whisperers must be behind this latest bad fortune and called for Alpha’s (Samantha Morton) blood. The rest were more cautious and wanted to try and avoid further conflict.

Others decided to take their anger out on Lydia. Of course it’s not her fault but when they won’t leave her alone she joined them while they were eating, cut a rabbit up in the table and did the Whisperer ‘shush’ action at them. It didn’t go down well. Negan tried to give her some advice but Daryl stepped in and told her not to talk to him.

The first order of business at Hilltop was to repair the fence to keep the walkers out. This was made difficult by the number of walkers outside. A group including Magna, Yumiko, Connie (Lauren Ridloff), Kelly (Angel Theory) and Luke (Dan Fogler) took the fight to the walkers to try and clear a path outside the walls. Eventually they became overwhelmed and had to retreat inside. When the walkers broke through, everyone joined in and it was great to see Judith (Cailey Fleming) showing off her sword skills.

That night, Lydia was ambushed by the group who had been bullying her. She tried to fight back but took a hell of a beating instead. Negan turned up and saved her while accidentally killing ex-Highwayman Margo (Jerri Tubbs). Of course in the eyes of the survivors Negan can’t do anything good and many wanted to kill him. The council decided to take a vote which ended up tied. The deciding vote was with Gabriel (Seth Gilliam) who decided to sleep on it.

Elsewhere in the episode, Ezekiel struggled with all the loss that he’d faced. He’s clearly depressed after losing Henry, Shiva and the Kingdom but losing Carol too has left him broken. At one point he took himself off to apparently jump off a cliff but Michonne (Danai Gurira) spotted him and talked him down. His response was unexpected and even surprised himself and Michonne as he grabbed and kissed her. He later apologised and the pair bonded.

At the end of the episode, Negan went missing from his cell. Lydia said she let him out and took his place but no one believed her. Meanwhile, Michonne led a party to Oceanside and Luke jumped at the chance to go along in the hope of spending more time with Jules (Alex Sgambati).

Can’t wait for the next episode? Read our preview of The Walking Dead – 10×05 What It Always Is.