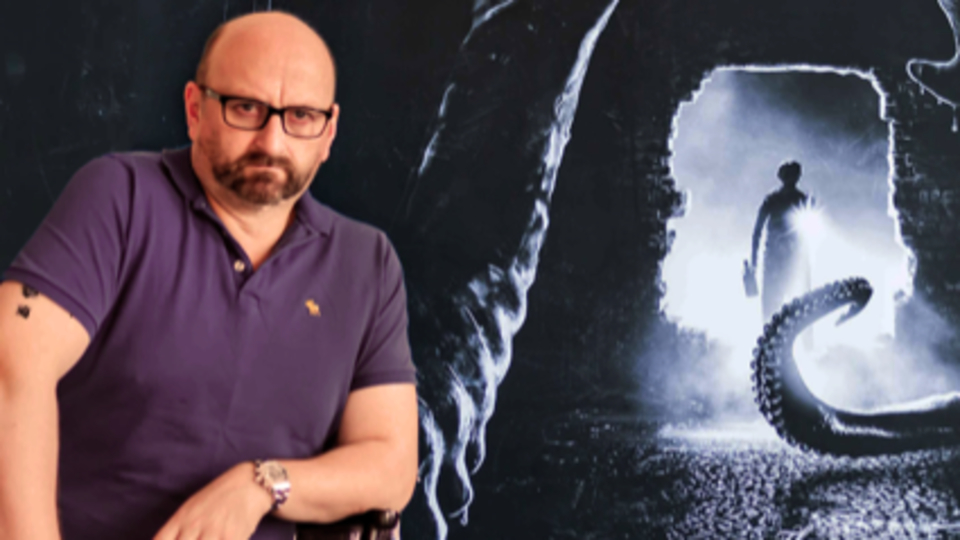 Happy Halloween everybody! Kraken Rum has joined forces with Hollywood horror mastermind Neil Marshall to direct a first-of-its-kind Halloween bar experience, which is set to terrify London for the next couple of nights.

The Kraken Rum will deliver a unique bar and horror experience like no other, and have commissioned legendary horror mastermind Neil Marshall to direct every detail of the night. Dubbed ‘Kraken Screamfest: Director’s Cut’ – it promises to bestow fresh new nightmares on even the most devoted fans of the horror genre.

Be warned though! Neil Marshall, famed for classics The Descent, Dog Soldiers and Game of Thrones, will be terrifying those brave enough to step inside the real-world creation of his darkest imaginings. Everything from the décor and the staff to the Kraken Rum cocktails will have a spine-chilling ‘Marshall twist’, with surprises lurking around every corner.

Marshall isn’t giving any secrets away ahead of the launch, except visitors should expect to be greeted by a few unwelcome souls called The Risen who’ll be your friends (or foes) for the evening, but it may well be your last orders – ever!

So those who scare easily should stay away as The Kraken does not do things by halves, and the thrills offered up will no doubt be (almost) as delicious as the drinks on offer!

We chatted to Neil about the event and what people can expect, along with his Halloween memories and a look back on his career.

Kraken contacted my management team out of the blue and I jumped at the chance to do something new. Something that represented a creative challenge.

Could you tell us a bit about the concept behind Kraken Scream?

I’ve lived in the US for 7 years now, and they take Halloween very seriously over here. I love all the horror mazes, haunted houses and other interactive attractions that pop up for the Halloween season. So my thought was to bring a little of that Halloween spirit to London and Dublin, to create a genuine fun and terrifying event to loves of Kraken rum and all things scary.

Who are The Risen, and what’s their story?

The Risen are all the thousands, if not millions, of poor souls who have lost their lives at sea over the countless centuries. Now they’ve been brought back by the Kraken and are rising up out of the seas and rivers the world over to spread their black ink blood throughout the worlds population….

The location for the London event is called The Pit – which sounds ominous! Can you tell us exactly what people can expect to find when they pass through the doors?

I would, but I don’t want to give too much away. Suffice to say that once you’re inside, what at first seems like a safe haven from the hordes of Risen roaming the streets, becomes a deadly trap in which everyone is snared. Then it becomes a race to survive and the only way out is to hold onto your drink and try not to spill a drop.

What challenges did mounting a project of this scale and scope present?

To be honest, once I’d figured out the story and general horror concept, the biggest challenge was finding the location that would fit with the concept. We looked at a few places but once we found The Pit we knew we’d nailed it.

What are you most looking forward to people experiencing on the night?

There’s a dark twist and I’m looking forward to seeing how people react to that.

Tell us about your working relationship with Kraken and why are they good partners for this horror project?

Kraken, and especially the team at COW PR, who I’ve been working directly with, have been great collaborative partners on this project. The best you can hope for on something like this is a two-way street of ideas and possibilities, and that’s what we had here.

Can you name three seminal moments (from the world of horror) that have gone on to influence your career?

The chest-burster scene from Alien had a huge impact on me. So did the werewolf transformation from An American Werewolf in London and I guess the opening shark attack from Jaws. They are all very primal, raw and terrifying. Maybe it’s because I first saw all of these scenes when I was in my early teens. Things have a real impact at that age. But all of these scene certainly made their mark and heavily influenced by work.

It seems to have taken the UK a long time to really embrace Halloween. With more and more events happening across the country to mark the occasion, I was wondering how you used to celebrate Halloween in your youth?

In the UK, Halloween was always overshadowed by November 5th, so other than wearing masks or maybe watching a few horror movies, we didn’t do much to celebrate halloween. I’m glad to see the UK is finally starting to embrace halloween as a major cause of celebrations of the spooky kind!

Tough question….. I’d have to go with Alien. But that’s closely followed by Jaws, The Fog, The Thing, The Shining, American Werewolf, The Howling, Deliverance…. to name a few.

Dog Soldiers and The Descent are still so beloved in the world of horror. Did you have any idea you were making two modern classic at the time?

You can’t possibly know what life a movie is going to have. All you can do is put your heart and soul into it, make it as good as it can possibly be and hope for the best. I basically make movies that I want to see. If it turns out that others want to see them too, then all the better for it. I’m immensely proud that people have taken these movies to their hearts.

I love a good horror anthology and your contribution to 2015’s Tales of Halloween was brilliant. What are your memories from working on that project?

That was a crazy but wonderful experience. The entire movie was forged from a shared love of horror by everyone involved. It was very low budget, in think something like $200k, and we only had 2 nights to shoot each episode, but so many people wanted to be involved they happily worked for free, usually as extras or cameos. The horror community in LA is very tight, and lot of close friends who support each others endeavors. Tales of Halloween marked the first time everyone came together to work on the same project. And I got to make a killer pumpkin, and direct several of my icons, like Joe Dante, Adrienne Barbeau, Drew Struzan and John Savage to name a few, as well as have the legendary Lalo Schriffrin compose the theme tune. It doesn’t get much better than that!

What advice would you have given your younger self starting out in film?

Yeah, if the opportunity comes, don’t do Hellboy.

What was the last thing that truly scared you in the world of Film or TV?

I get asked this a lot, and honestly the last movie that really got to me (and sadly, not many do any more) was Lake Mungo. I highly recommend this brilliantly constructed and expertly realized horror mockumentary.

Many believe we are in a golden age of TV and that it has overtaken Film. What do you think?

I certainly agree we are in a golden age of television, and it’s been incredible to be a part of the tv revolution that’s happened over the last 10 years or so. We still call it television, but really we’re talking about cable and streaming, they are the ones leading the way. I don’t think TV has conquered film, but the chess pieces have certainly moved around the board quite dramatically and TV is giving film a serious run for its money.

Do you think interactive experiences like Kraken Scream: The Director’s Cut is where modern horror is going now?

I don’t think so. It’s a very different experience, and it’s a fun one too. There’s always room for something new, but you still can’t beat a good horror movie.

It’s changed in many ways, and so fast it’s difficult to catch up sometimes. It’s so much easier to make a movie now, thanks to the digital revolution, but also harder to get it out there, get it seen, and it’s even harder to get it on the big screen. There is so much more competition now, not just from the TV industry, but the industry has become so much more accessible. Making movies used to be something of a mystery to most people. Special effects were genuinely special because audiences had no clue how they were achieved. That’s all changed now as everybody has access to behind the scenes docs, the internet, books etc. The information is all there at the push of a button. So many more people want to be in the industry, standing out and getting a foothold is so much harder.

What/who were your biggest influences growing up?

Steven Spielberg, George Lucas, Ridley Scott and John Carpenter where probably the three biggest movie influences for me. Between them they encompass many of my all time favorite movies. It’s difficult to explain just how much these guys got into a psyche and set me on my path. Spielberg in particular, and his holy trinity of Jaws, Close Encounters and Raiders of the Lost Ark… These are the movies that made me want to make movies. I was 11 years old when I first saw Raiders. It changed my life forever, and I’m very glad of it!

I just finished shooting a new horror movie THE RECKONING out in Budapest. I’m editing that now and it should be out next year. It stars Charlotte Kirk, Sean Pertwee, Joe Anderson and Steve Waddington, among others. Set in 1665 England, it tells the story of a woman falsely accused of witchcraft, who ultimately gets revenge upon her persecutors. It’s going to be deep, dark and very scary.

Finally, what will you be doing on Halloween this year?