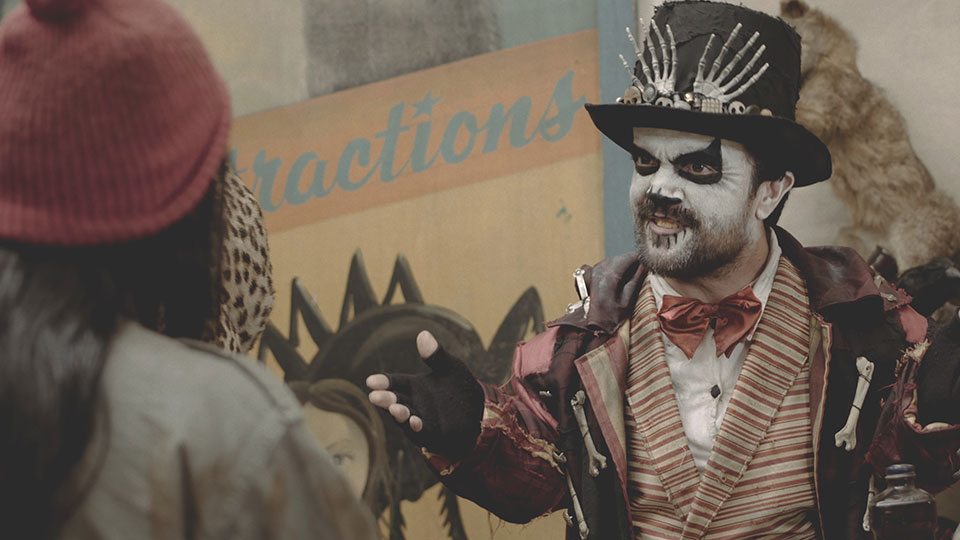 Mike (Jimothy Beckholt), Steve (Cy Creamer), Bobby (Caleb Thomas) and Carol (Madison Russ) decide to continue a long-running Halloween prank on local boy Jacob (Nate Chaney), who is a bit of an oddball and is working for a touring freak show. The prank goes wrong when Jacob hits out at Mike and violence follows leaving Jacob badly beaten and fighting for his life. The freak show leader Lester (Pancho Moler) uses dark magic to bring Jacob back, enabling him to exact revenge on the group that attacked him.

Candy Corn purposely captures the look and feel of the late 70s/early 80s style horror movies. With washed out colours and not a single mobile phone in sight, director/writer Josh Hasty has definitely managed to paying loving homage to vintage slasher films. That gives the film a really cool aesthetic style that helps to build the atmosphere for this slasher-of-sorts set in a small US town.

Full of potential, the film gets off to an iffy start with some terrible acting from one of the leads, who sadly ends up getting far too much screentime and isn’t in the slightest bit convincing. There’s also a slight lack of logic with the character of Carol who didn’t participate in the beating of Jacob and wrestles with what happened for all of five minutes before scolding her boyfriend Steve and getting frisky with him at every opportunity. Hasty also decides to strip her down to her underwear for no apparent reason at one point and it just feels exploitative.

Where the film ultimately falls down is that we don’t care about any of the characters at all. They commit such a heinous act in the opening few minutes that you don’t care if they die, and their deaths aren’t all that exciting either. Sure there’s blood and they aren’t very realistic but there’s not much of a thrill there. The big climax you spend the film waiting for never materialises and when it ends you’re left thinking ‘was that it?’

Pancho Moler is one of the film’s saving graces. His performance is very entertaining and he makes for a good shapeshifting character. He doesn’t get as much screentime as he should but at least he fars better than horror icon Tony Todd who is relegated to less than 5 minutes of screentime. Of the young central cast Cy Creamer is decent as the good-looking jock caught up in a bad situation while Madison Russ is under-used as Carol, the character that should have been the film’s moral compass.

Candy Corn is a complete wasted opportunity. It’s too slow to get going, all of the characters are awful and the deaths aren’t that exciting. We spend far too much time following the Sheriff (Courtney Gains) around, who happens to be Mike’s dad, and not enough time building a proper story or scares. I had high hopes for this Halloween chiller but sadly it was a huge disappointment.