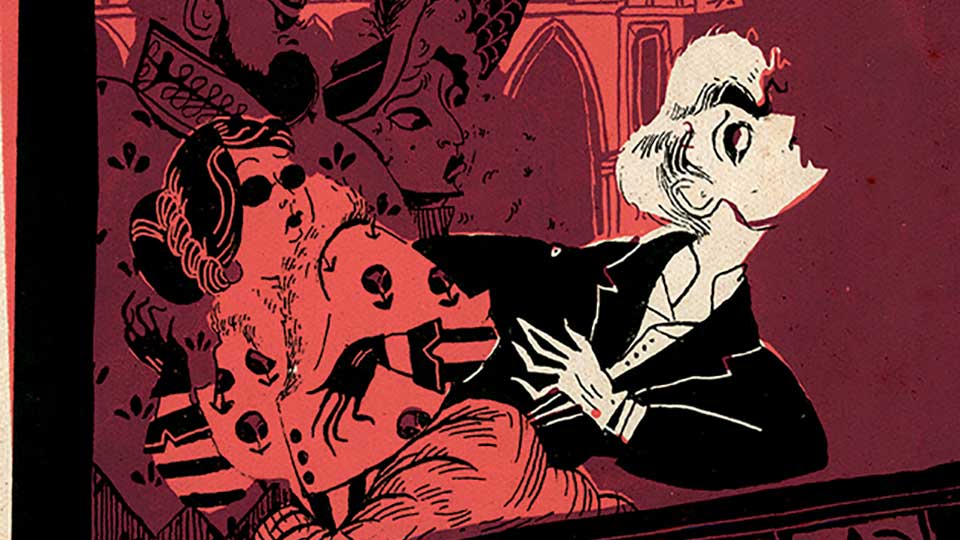 In May 1896, Gaston Leroux heard about a concierge who was killed by a falling chandelier during a performance at the Opéra Garnier. Reported as a freak accident, many believed that it confirmed the existence of the fabled ghost and the seed of a story was planted. Already a successful journalist and author, Leroux put his detective stories aside to create a gothic tale with a ghoulish protagonist, and locked himself away until it was complete. The Phantom of the Opera was widely translated and serialised as soon as it was published and became a bestseller.

Set almost entirely inside the celebrated, cavernous Opéra Garnier, this macabre adventure races between the public and private spaces of this world within a world – a parallel universe of good and bad, visible and concealed, smoke and mirrors. While the opulent foyer and auditorium radiate glitz and glamour, behind the scenes it is an eerie and disorientating place, the contrast between above and below both stark and ominous.

David Coward’s 2012 translation is based on the complete unabridged text and incorporates all Leroux’s trademark stylistic flourishes. Simon Callow’s introduction reflects his extensive experience of the theatre world. The piece encompasses the fascinating history of the Palais Garnier as well as a biography of the eccentric workaholic Leroux.

Each of the twenty-seven chapters begins with an individually designed decoration by Taylor Dolan. The saturated colours and period poster-like style of her arresting colour illustrations and binding are inspired by a childhood spent in and around the theatre. All of Taylor’s originals for the stunning artwork were screen printed by hand for reproduction in this exquisitely produced edition from The Folio Society.

In his introduction, Callow writes: “Leroux announced The Phantom of the Opera in 1909, and it appeared in instalments that year and the next. It made no great stir at the time, though it did rather better in novel form. Other stories poured out of the author in an unstoppable flow, some more successful than others, but all exuberantly inventive. Then in 1925, Carl Laemmle of Universal Studios produced the sensational silent film starring Lon Chaney, for which the entire foyer of the Palais Garnier was reconstructed in Hollywood, and the novel finally became a bestseller on both sides of the Atlantic and both sides of the Channel; the British edition was brought out by Mills and Boon. It is uncertain whether Leroux ever saw the film. Curiously enough, he had become increasingly involved in film production, even directing a couple himself: in 1919, he and his friend Arthur Bernède had formed their own film company, the Société des Cinéromans, to publish novels and simultaneously turn them into films. Their efforts were not without success: in 1926 Leroux was acclaimed in the pages of the influential magazine Mon Ciné as a master screenwriter in the making: ‘My first priority, as head of a film company,’ wrote one of the magazine’s columnists, would be to recruit [Leroux] to my organisation, at whatever price.”

The Folio Society edition of Gaston Leroux’s The Phantom of the Opera, translated by David Coward, introduced by Simon Callow and illustrated by Taylor Dolan, is available exclusively from The Folio Society.

Advertisement. Scroll to continue reading.
In this article:Gaston Leroux, The Folio Society, The Phantom of the Opera