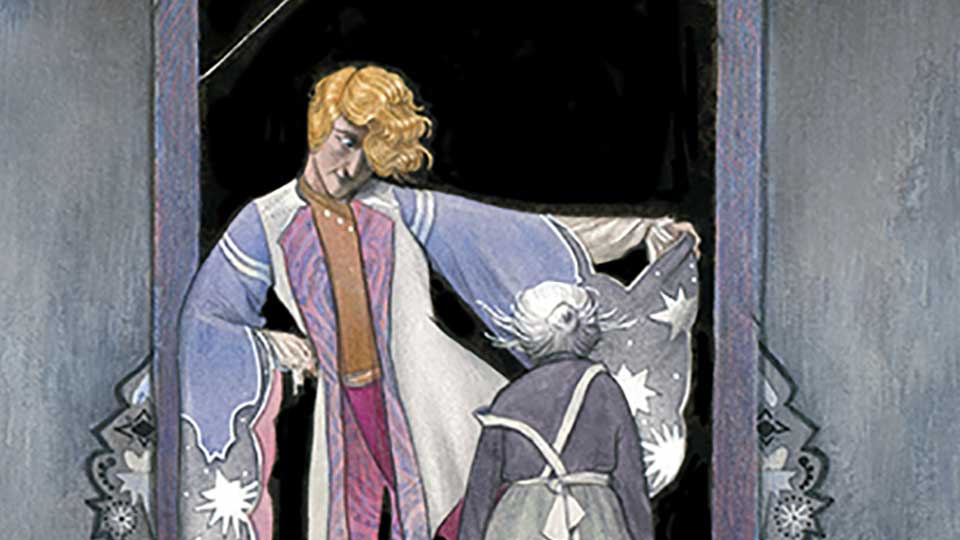 Deep in the land of Ingary, the Wizard Howl’s castle hovers above the imaginary town of Market Chipping, terrorising the inhabitants below. Legend has it that the enigmatic wizard consumes the hearts of young girls but this doesn’t deter eighteen-year-old Sophie from hitching a ride in the castle…

Although beloved by those familiar with Wynne Jones’s work, Howl’s Moving Castle remained largely under the mainstream radar until the book was adapted into an animation by the world-famous Studio Ghibli. Released in 2004, it broke global box office records and subsequently catapulted the novel to bestseller status.

As the award-winning young-adult novelist Marcus Sedgwick discusses in his newly commissioned introduction, Wynne Jones draws on her childhood with wry references to modern life in suburban Wales and tantalising hints at her own history. These are cleverly stirred into the mix with a cloak of invisibility, a talking fire demon and a persistent scarecrow: the everyday detail as engaging as the fantasy box of delights that Wynne Jones has created.

Selected from over five hundred entries from around the world, Scottish resident Marie-Alice Harel re-enchants the fairy tale tradition with her exquisite artwork. She has created 6 colour illustrations and over twenty black-and-white integrated decorations that offer tantalising clues to the story and her wraparound binding shows Sophie Hatter being magnetically drawn to the gloomy castle with its mysterious four-fold aspect.

In his introduction, Marcus Sedgwick writes: “Howl’s Moving Castle is a wonderful creation. It’s full of life, it’s funny, it’s gleefully inventive, it’s wise about the ways of people, about love and jealousy and gender in general. This new edition is complemented by the illustrations of Marie-Alice Harel, which are just what the book is: weird, wise and wonderful. They reaffirm why Howl is simply a joy to read: a perfect example of how Wynne Jones achieved a new, successful marriage between the old stories and the new world, success due in very large part to her style, to her wit.”

The Folio Society edition of Howl’s Moving Castle by Diana Wynne Jones, introduced by Marcus Sedgwick and illustrated by Marie-Alice Harel, is available exclusively from The Folio Society.