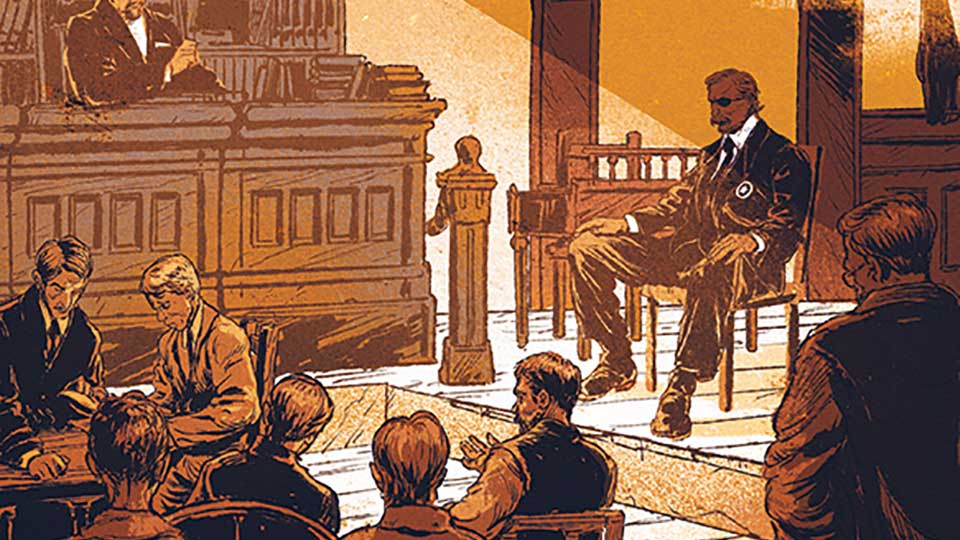 True Grit is a taut, tense and unflinching story in the tradition of Lee, Steinbeck and Twain. It is considered one of the greats of first person American literature. Beautifully written and epic in scale, it has all the characteristics of a classic western and marks The Folio Society’s first sortie into this rich genre. In a classic tale of revenge, Charles Portis pits the wits of a teenage girl against gun-toting outlaws. However, it isn’t long before she holds her own in the badlands of 1870s Arkansas.

Mattie Ross is a typical western protagonist in everything but gender. When she hires Rooster Cogburn, a one-eyed US Marshall with a taste for whisky and a trigger-happy approach to law enforcement, to track down her father’s murderer he quickly picks up the killer’s scent and together they set out to apprehend him.

Soaked in sepia hues, Juan Estaban Rodríguez’s lavish illustrations of these atmospheric scenes perfectly depict the characters and their surroundings. The wraparound binding shows a defiant Mattie staring at the trail she hopes will lead to revenge.

Portis’s story is driven by dialogue, with Mattie’s Presbyterian correctness in stark contrast to the rough vernacular and cussing of the outlaws and their pursuers. As celebrated author Donna Tartt writes in her introduction: “No living Southern writer captures the spoken idioms of the South as artfully as Portis does.” She goes on to say, “Not only have I loved True Grit since I was a child; it is a book loved passionately by my entire family. I cannot think of another novel—any novel—which is so delightful to so many disparate age groups and literary tastes. Four generations of us fell for it in a swift coup de foudre—starting with my mother’s grandmother, then in her early eighties, who borrowed it from the library and adored it and passed it along to my mother.”

The Folio Society edition of True Grit by Charles Portis, introduced by Donna Tartt and illustrated by Juan Estaban Rodriguez, is available exclusively from The Folio Society.