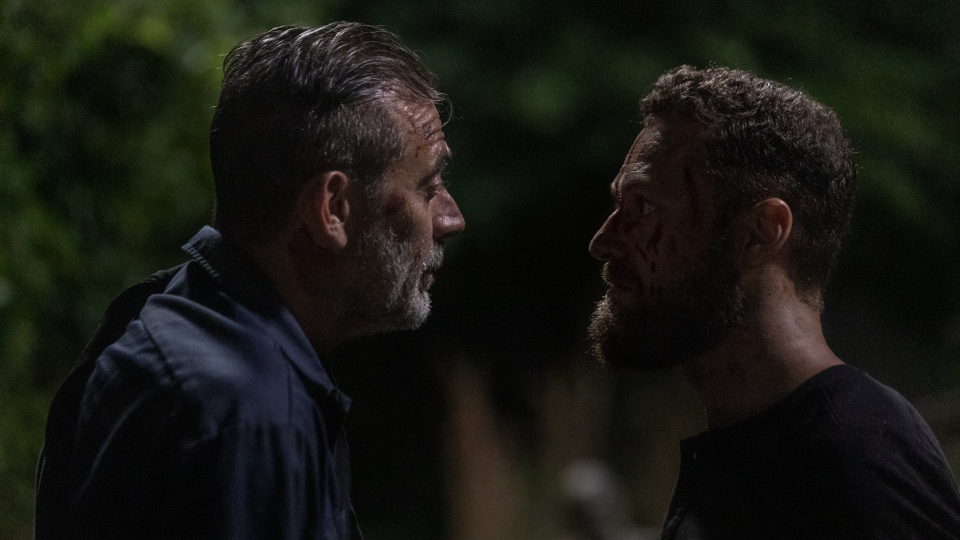 In the latest episode of The Walking Dead, Carol (Melissa McBride) had a really hard time.

The episode began early in the morning with a large group of walkers heading towards Alexandria. Just as the community dealt with them, another wave appeared followed by a seemingly endless number of similarly sized waves. The undead were approaching from all angles and the sheer numbers meant it was impossible for the survivors to get any rest.

This continued for more than two days leaving everyone rather exhausted. They were convinced it must be the work of Alpha (Samantha Morton) but Lydia (Cassady McClincy) was sure that her mother wasn’t behind the attacks. Eventually, a Whisperer approached and it was the newly promoted Gamma (Thora Birch). She said that the attacks weren’t their doing and that the leaders of Alexandria come to the border to meet with Alpha.

The council held a meeting to discuss their options. Michonne (Danai Gurira) said they should meet with Alpha to hear what she had to say. Many of the community thought it was a bad idea and the Highway Men wanted to strike back. Eventually the only option was to attend the meeting.

Meanwhile, the walker waves continued. Aaron (Ross Marquand) led a party south and was forced by Gabriel (Seth Gilliam) to take Negan (Jeffrey Dean Morgan) to assist. Aaron really wasn’t keen on the idea and Negan said he’d rather stay home and safe too. Aaron switched out his fake hand for a mean looking spiked metal ball but would only let Negan use a stick to fight the walkers.

Aaron clashed with Negan as they continued to fight the undead. Eventually a walker riddled with hogweed attacked and it left Aaron temporarily blinded. He managed to escape to an abandoned cabin and Negan kept an eye on him. When Aaron was attacked again, Negan stepped in to save him and then kept watch during the night. The next day Aaron had regained his sight and maybe some trust in Negan as well.

At the border, Michonne, Daryl (Norman Reedus), Carol and more waited impatiently for Alpha. They laid down their weapons as instructed and were soon approached. Keen for revenge, Carol kept a pistol tucked into the back of her trousers and waited for the right time to use it.

Alpha said they needed to be punished for straying into her lands. Michonne said it was only one time to deal with the fires caused by the satellite. However, Alpha knew it had been three times. Instead of going for blood, Alpha demanded that the survivors give up more land. Everyone reluctantly agreed but Carol wasn’t having any of it. She stood up to Alpha and tried to shoot her but was stopped by Daryl and Michonne.

It’s unlike Carol to gamble with the lives of her friends and it was revealed that she’s been taking lots of pills to stay awake. Back in the woods, Carol was sure she saw three Whisperers so the group searched for them. Their search took them to an abandoned school where they decided to rest. Carol volunteered to take the first watch and continued with her pills.

She began having hallucinations and imagined a conversation between herself and Daryl. Later she heard Henry and ended up getting caught in a rope trap in the gym. As she hung upside down by her leg, a Whisperer, flanked by the undead, came and taunted her. Carol killed some of the walkers before cutting herself free. She fell and impaled her arm on some glass. It was hard to know if she had imagined the entire thing.

At the end of the episode, it was revealed that the walker that Carol imagined in the gym was in fact real.

Can’t wait for the next episode? Read our preview of The Walking Dead – 10×04 Silence the Whisperers.